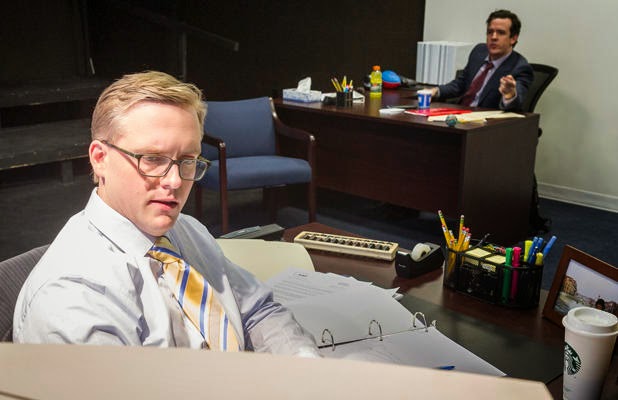 Beau Willimon’s first play, Farragut North, was produced by the Atlantic Theater Company with John Gallagher and Chris Noth in the lead roles and then turned into the movie “The Ides of March,” starring Ryan Gosling and George Clooney. Willimon then scored big with “House of Cards,” the political drama series with Kevin Spacey and Robin Wright that made Netflix a power in the TV business. So I was a little suspicious when I saw that the world premiere of his new play Breathing Time was going to be done by the tiny Fault Line Theatre company.

Still, I got myself down to Teatro IATI to see it. A small space on the same block as New York Theatre Workshop and La MaMa that barely seats 100 people, the theater was only half full at the performance I attended but I’m glad I made it there. Because Willimon has a great ear for dialog and this 90-minute play, crisply directed by Fault Line's co-artistic director Aaron Rossini, is a great showcase for his smart talk.
It opens in an office shared by two lower-middle-rank guys in a Manhattan financial firm.  One is a play-by-the-rules family man who works with derivatives, the other is a go-for-broke bro assigned to marketing who arrives at work with a hangover even though he’s schedule to present a potentially career-changing idea to the board that morning.

The guys trade insults, dreams and schemes until fate intervenes and changes the course of their lives. In the next scene two women who know them get together for drinks, dinner and a more uneasy conversation.

There is a schematic quality to the play that makes it seem as though it were an early effort Willimon pulled out of his files rather than something he recently wrote. But the easy banter and the sensitivity to power dynamics that are his trademarks still command attention. Actors looking for fresh audition material or scene work should check out the script.

The acting in the current production is a tad monochromatic.  The actors find a suitable color for the characters they play and stick with it. Although the women are a little more daring than the men. I’ll be particularly interested in seeing what Molly Thomas, who adds fresh shadings to the role of a tightly wound suburban housewife, does next.

Breathing Time is performed in the round, with the audience seated on two sides of the playing area.  I usually find those kinds of arrangements distracting but this time, I was almost as entertained by the facial expressions of a woman sitting across from me as she figured out what was going on in each scene as by the show itself.

The seating is first-come-first-serve, so if you’re thinking about going before the run ends on April 13, get there early and grab one in the section nearest the entrance.