A Labor Day Salute to the Talent-Spotters 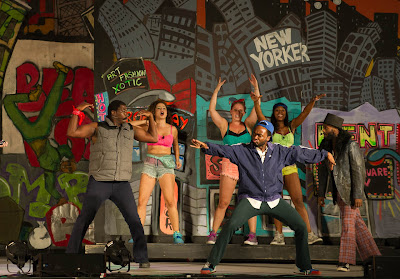 There’s a certain magic about seeing a show in Central Park, no matter what the show is.  I’ve seen two there over the last couple of weeks and although not crazy about either, I’m sure I would have been even less so if I hadn’t been sitting outside on a balmy summer evening, surrounded by a diverse crowd of folks, some of whom were theater lovers who’d go anywhere to see a show and others who were just eager for something free or fun to do.  I just wish the shows they’d seen had been better.

The first was a musical called King Kong that is part of the SummerStage series that travels to parks all over the city. The 90-minute show, which has been making the rounds since July 30 and finishes up with three performances at East River Park next week, seemed a natural for Summerstage’s “This is_Hip-Hop” series.  For King Kong is set in 1978 and purports to be about the early days of rap music.
But I’m guessing that most of the people who’ve seen the show were as confused as I was about why a celebration of hip-hop would begin with a big splashy song-and-dance number that looked more like at tribute to David Merrick than to DJ Cool Herc.

And that’s not the show’s only misstep.  Its primary creators Alfred Preisser and Randy Weiner have been working on it for 15 years and seem to have lost their way during the journey (click here to read about the show's history).
Their musical's connection to the traditional King Kong's beauty-and-the-beast tale is tenuous at best, although there is a blonde named Faye who gets tangled up with a black rapper whose moniker is the same as the famous gorilla’s.  And that brings up a whole other problem: do two white guys really want to associate black people with apes?
That would be unbelievably offensive if they weren’t also offending Jews (portrayed as money-grubbers) and gay people (all swishy and, inexplicably, badly dressed).
All of it is played for laughs and many people around me were laughing hard. They also seemed to enjoy hearing songs from the late ‘70s and early ‘80s that were sampled in the show (I’ve no idea how this modest production paid for all the rights). But my niece Jennifer was so appalled that she literally bent over and put her head in her hands.
I knew exactly how she felt and I wonder what the folks at St. Mary’s Park in the South Bronx thought of this messy mash-up about the innovative musical genre that started in their neighborhood 40 summers ago. 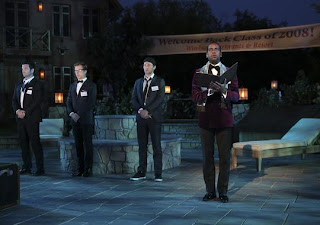 Things are, as you might expect, slicker over on the other side of the park at Shakespeare in the Park’s Delacorte Theater, which is now hosting a musical version of Love’s Labour’s Lost, one of the least known and oddest of Shakespeare’s plays.

The plot centers around four young aristocrats who swear off women so that they can focus on their studies. Their abstinence is put to the test by the arrival of a visiting princess and her comely ladies.
The Public has been open about its hopes that this musical version of the play might enjoy the success of Two Gentlemen of Verona, the rock musical based on another of Shakespeare’s comedies that originated in the park in 1971 and then moved to Broadway, where it won the Tony for Best Musical the following year.
This new production features a charming set by John Lee Beatty, supple lighting by Jeff Croiter, witty costumes by Jennifer Moeller and a cast of up-and-coming talents lead by Daniel Breaker, Colin Donnell, Rebecca Naomi Jones and Patti Murin. But Love’s Labour’s Lost seems unlikely to follow in Two Gent’s footsteps.

Alex Timbers, who has adapted the book and directed the new production, has said in numerous interviews (click here to listen to one) that he likes to make musicals that appeal to people who don’t usually like musicals.

That approach seems to work with downtown hipsters as happened with the recent production of Here Lies Love, the Imelda Marcos musical he did with David Byrne (click here to read my review of that). But it’s had a tougher time with more traditional theatergoers, as happened with his Bloody Bloody Andrew Jackson, which was a big hit at the Public but played for just 94 performances when it moved to Broadway.
Timbers doesn’t even try to woo traditional showgoers this time out. A banner strung across the Delacorte stage reads “Welcome Class of 2008” and it’s a not-so-subtle signal that this show is aimed squarely at the Lena Dunham generation who grew up on a steady diet of pop culture that included boy bands, loopy TV shows like “Jackass” and an irony-laced fondness for all things cheesy.
And there’s a lot of cheesy stuff in this production. The setting has been moved to a contemporary college campus and Timbers throws in self-conscious references to everything from Philip Glass to Cats, TED talks to Segway scooters. There’s even a full high school marching band. The latter is supposed to be a surprise but I’m going ahead with the spoiler since the run ends tomorrow, even though the official opening was just last Sunday.

The music runs the gamut from show tunes to boy band pop and Michael Friedman’s busy score crams 21 pleasant but not particularly memorable songs into just 100 intermissionless minutes (click here to hear some of them).
That doesn’t leave a whole lot of room for the Bard’s words.  A few speeches do sneak in but several of them are punctuated by profanity, which too often substitutes for wit in much of today's comedy. In fact, as my theatergoing buddy Bill observed, the whole thing comes off as one of those spoofy shows that smart college kids like to put on for themselves.

But Bill and I may be in the minority on this one.  Most of the critics were charmed by the show and even those with reservations are willing to give it a pass as a nice summertime romp (click here to read their reviews).
Meanwhile, the show also seems to have hit the sweet spot with its target audience.  The twentysomethings sitting around me fell all over themselves laughing. And as I walked home, I overheard one hipster gal say to her date, “That was a really good show.”

The Pains of Summer Festival Fatigue