Even, or maybe especially, in these pandemic times, it's time to put on a good face and celebrate the theater that we all continue to love: 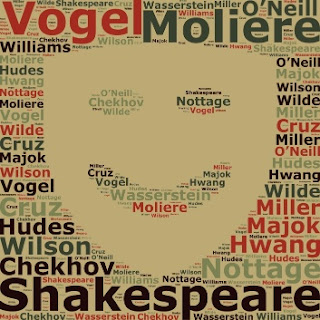 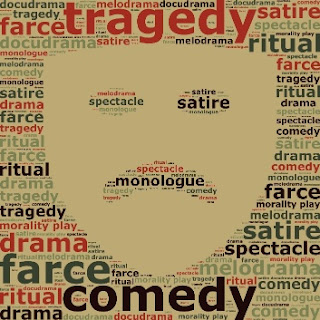 A Theatrical Anniversary None of Us Wanted

A year ago today, I was gearing up for the intense out-every-night theatergoing of awards season and, as I told my friend David Gordon who has been publishing a chronicle of this past pandemic year on the Theatermania site (click here to read some of it), I had already scheduled tickets for more than two dozen plays over the coming five weeks and was busy setting up others. Yet, I was also a bit nervous about this strange new virus that seemed to be spreading rapidly. And I wasn’t the only anxious one. Everywhere I went, the scent of Purell hung heavy in the air and friends made uneasy jokes about how often we all were washing our hands.

Still my theatergoing buddy Bill and I met up at the Greenwich House Theater in the Village to see a preview of the Ars Nova production of the now-ironically named Oratorio for Living Things. We showgoers were forced to wait in the lobby until right before curtain time and were then ushered into a small space that had been outfitted with temporary risers. I remember watching the 94-year-old critic William Wolf and his wife Lillian clamber up to their seats as I thought about what intrepid theater lovers they were. But my nervousness intensified when the show began because the performers meandered through the audience as they sang and I couldn’t help wondering if that were safe for any of us.

That was the last time I was in a theater. Bill and I were supposed to go to Playwrights Horizons to see Unknown Soldier, the late Michael Friedman’s final work, the next night, March 12, but I called and told him I had become too uneasy to sit in a theater. Later that day, Broadway shut down, supposedly only for a month. Smaller theaters around the city quickly did the same. Two weeks later, Bill Wolf died from complications brought on by the virus. Over the past 12 months, the virus has killed more than half a million other Americans, nearly one out of ten of them New Yorkers.

So the theaters have remained closed and the pandemic has devastated New York’s theater community. The playwright Terrence McNally died from the virus. The actors Mark Blum and Nick Cordero died. Danny Burstein almost died and then lost his wife Rebecca Luker. And thousands of people were put out of work—not only actors, musicians and designers but those that work in the shops that make costumes and props and in the restaurants and bars that theatergoers frequented after seeing shows. By some estimates, 50,000 theater-related jobs were lost.

But theater folks like Rosie O’Donnell and Seth Rudetsky rallied to the call, organizing online fundraisers for groups like The Actors Fund, which has distributed more than $20 million to some 15,000 people this past year. Others celebrated Stephen Sondheim’s 90th birthday with a star-studded concert that uplifted more than just that master of the musical.  And still others wrote and recorded monologues and mini-plays chronicling the toll of the epidemic or exploring the racial fissures in the country revealed by last summer’s brutal suffocation of George Floyd by a white cop whose murder trial began this week.

As the weeks went by, the productions got more and more sophisticated. Some companies like the Mint Theater raided their archives and streamed previously recorded productions for free. Others like New York’s Irish Repertory Theatre, Chicago’s Steppenwolf and London’s Old Vic created entire digital seasons. There’s been a revival of audioplays. And the platform TikTok has even got into the act with a few group-created musicals. Some of it has been so-so; some of it has been great. My blogger pal Jonathan Mandell has assembled a list of some of the very best, which you can find my clicking here.

It’s still too soon to know when we’ll all be able to return in person to the theater again but the possibility seems closer. People, including Sondheim, are getting vaccinated. Joe Biden’s economic recovery package has passed, providing money for individuals and venues to keep going until everyone is back on their feet.

And this week has brought the announcement that a few Broadway theaters will open in April for performances as part of the city’s NY PopsUp program, which is designed to bring live entertainment back to the city. Venues with flexible spaces that can accommodate distanced seating are scheduling productions for this spring. Commercial producers are predicting that Broadway may open its doors in the fall and tickets for touring shows have begun to go on sale. Meanwhile Tony voting is underway.

I haven’t written much here over the past year but I have tried to keep up with events in a special magazine, Theater in the Season of the Coronavirus, that I set up on the Flipboard site and I hope you will check it out, which you can do by clicking here.  I hope, too, that by this time next year, we’ll all be back in our seats in our favorite theaters and perhaps, if the theater gods smile on us, we can even do it without needing to wear masks.