A Great Start to This Year's Awards Season 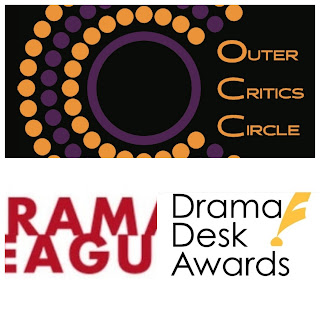 Hard to believe but the 2018-2019 season is over. Except for the shouting. And there will be plenty of that because we’re now in awards season, which means the weeks from now until the June 9 Tony Awards ceremony will be filled with all kinds of theater-related press coverage (like The New York Times’ multi-article look at how black playwrights energized the season) and theater-related events (including an already-sold out live reunion of the much-missed TV show “Theater Talk” that will take place at the New York Public Library for the Performing Arts at Lincoln Center on Tuesday, May 7, with panelists including the show’s creator Susan Haskins, New York Times theater critics Ben Brantley and Jesse Green and me).

Of course awards season is mainly about the awards celebrating the best theater of the past year. The Tonys will announce their nominees this coming Tuesday. But the Drama Desk, the Drama League and the Outer Critics Circle (on whose nominating committee I’m honored to sit) have already released their slates. Two of the biggest love-‘em-or-hate-‘em shows—Hadestown and Oklahoma!—have so far garnered the most nominations.

But those nominating groups, who, unlike the Tonys, celebrate both Broadway and off-Broadway shows, spread their love around, with productions from early in the season like Classic Stage Company’s Carmen Jones, New York Theatre Workshop’s The House That Will Not Stand and Signature Theatre’s Our Lady of 121st Street getting nods right alongside the more recent Broadway arrivals such as All My Sons, Ink and Tootsie

The individuals they've honored are wonderfully diverse and at the same time each totally deserving. Female artists appear in an unprecedented number of categories. Those telling a full range of LGBTQ stories are celebrated. Talented newcomers stand shoulder to shoulder with accomplished old-timers. And the nominees are so racially diverse that three of the OCC’s five nominees for Best Actor in a Play are black.

Those are just a few of the reasons that I’m so proud of this year's OCC nominations and why I’m so delighted to share our choices here with you:

OUTSTANDING REVIVAL OF A PLAY
(Broadway or Off-Broadway)
All My Sons
By the Way, Meet Vera Stark
Juno and the Paycock
Our Lady of 121st Street
The Waverly Gallery

OUTSTANDING REVIVAL OF A MUSICAL
(Broadway or Off-Broadway)
Carmen Jones
Fiddler on the Roof (in Yiddish)
Kiss Me, Kate
Oklahoma!
Smokey Joe’s Cafe

OUTSTANDING FEATURED ACTRESS IN A PLAY
Joan Allen The Waverly Gallery
Stephanie Berry Sugar in Our Wounds
Fionnula Flanagan The Ferryman
Harriett D. Foy The House That Will Not Stand
Celia Keenan-Bolger To Kill a Mockingbird 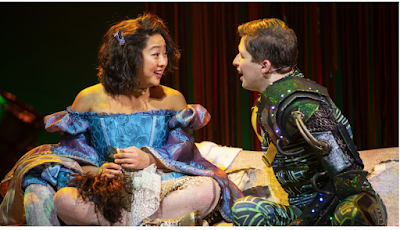 It’s rare for me to see a production more than once. Time is limited. Money is too. And besides there are always new show to see. But this season, three high-profile off-Broadway musicals have transferred to Broadway and in my role as an awards nominator and voter, I’ve had the chance to revisit—and reassess—them. So here are a few quick thoughts on each:

BE MORE CHILL. Joe Iconis and Joe Tracz’s adaptation of this 2004 YA novel is the most unlikely phenomenon. It's about a nerdy high school kid named Jeremy who discovers that he can become popular and impress the girl of his dreams (who's a theater geek!) by taking a pill that is actually a super computer that embeds in his brain and tells him how to be cool. Which, of course, turns out to be more problematic than he anticipated.

The show had a so-so run at the Two Rivers Theater in New Jersey four years ago but its soundtrack engendered 250 million streams online and led to a second production at the Pershing Square Signature Center last fall where I saw and enjoyed it, surrounded by scores of rabid young fans who clearly identified with its striving hero.

Now the show has taken up residence at the venerable Lyceum Theater and it’s even better. Director Stephen Brackett has smartly streamlined the storytelling, without sacrificing its wit or its underlying pathos. Iconis’ songs are still catchy and the performances of the show's multicultural cast, led by Will Roland, Stephanie Hsu and fan favorite George Salazar have been sharpened too.

You also can see where the producers spent the money that comes with a move to the main stem. The costumes are funnier, the sets are flashier and yet neither go overboard.

This feel-good show has always been aimed at young people but I saw a lot of 40-plus folks in the audience and we were all having a good time too. 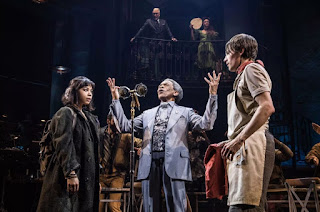 HADESTOWN. Singer-songwriter Anaïs Mitchell’s retelling of two Greek myths about the couples Orpheus and Eurydice and Hades and Persephone totally enchanted me when it played down at New York Theatre Workshop in 2016 and I worried that it wouldn’t play as well on Broadway. But I should have known better because it's directed by Rachel Chavkin.

Just as she did with the closed-far-earler-than-it-should-have Natasha, Pierre & the Great Comet of 1812, Chavkin has created a hip and wholly inventive production that combines the contemporary and the timeless. Honing the production during stops in Toronto and London, she’s restaged it for a proscenium instead of it playing it in the round as she did downtown.

She’s also added an ensemble of dancers to fill out her imaginary world and, most importantly, she’s recast some of the principal roles and allowed the new actors to bring their distinctive flavors to her still-savory stew.

Chris Sullivan, now familiar to TV watchers as Toby on the NBC series “This is Us,” was the linchpin of the NYTW production as the fedora-winning god Hades who serves as the show’s narrator. He’s been replaced by the sharkskin-suited Andre De Shields, who adds a flamboyant elegance to the proceedings.

Reeve Carney is a shier and more socially-awkward Orpheus than his predecessor Damon Daunno was but Carney's soaring high tenor voice adds a poignance to the young lovers' songs. Eva Noblezada turns Eurydice into an appealingly spunky little cookie but I missed the fragile quality that defined Nabiyah Be’s portrayal of the young heroine.

Meanwhile, Amber Gray continues to portray Persephone and to be the crowd favorite, although she seemed to be pandering a bit to the audience at the performance I saw. The basso-voiced Patrick Page remains the perfect Hades.

The show remains pretty close to perfect too. Its reminder of the essential need for trust in love and its warning that unbridled power can lead to fascism remain potent. Plus it’s one of the few musicals in my recent memory (Hamilton and Next to Normal being the other two) whose songs I can’t get out of my head. And don’t want to. 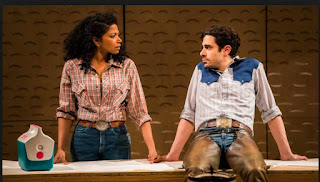 OKLAHOMA!  Among the hottest tickets of the season are ones to this controversial revival of the first collaboration between Richard Rodgers and Oscar Hammerstein. As anyone who knows anything about musicals knows, this show centers around a cowboy named Curly and a ranch hand named Judd competing for the affections of a farm girl named Laurie in the days before the eponymous state entered the union in 1907.

Without changing the dialog or the classic score, director Daniel Fish has given the show a grittier makeover. His non-traditionally-cast actors wear contemporary clothes. The songs are orchestrated with a country twang. The show’s central dream ballet has been converted into an intense modern dance by a solo performer. Some scenes are played in the dark. And just as it was when the show played at St. Ann’s Warehouse last fall, chili is served at intermission.

But the most important change in this telling of the story is that all the show’s underlying class, gender and sexual tensions are made explicit, as the former New York Times theater critic Frank Rich details in a trenchant essay that you can read here.

Seeing this  show and liking it has become a badge of theatrical hipness. But I’m afraid it’s one I can’t wear. The direction struck me as too self-conscious and, in places, even gimmicky. Some of the singing fails to do justice to Rodger's glorious melodies.

Ali Stroker and James Davis are a delight as the comic couple Ado Annie and Will Parker. But as my theatergoing buddy Bill observed, an Oklahoma! doesn’t really work if those characters are the bright spots of the show.

Facing up to this country’s troubled past can be a good thing but unlike the original 1943 production (which ran for a then-unheard of 2,212 performances) this incarnation provides little hope for the future. Even the upbeat title song becomes a dirge.

Not all mornings may be beautiful but some are and in these times, a show that believes in the possibility that more of them could be would be welcomed, at least by me.