Too Pooped to Turn on the Ghost Light

No post today. And I'm too pooped to even turn on the ghost light that usually indicates I'm taking a break. Here's why: Over the past week, I've:
•taped my first episode of TheatreTalk (it's scheduled to air on public TV stations across the country the week of Dec. 4— and will later be available online at theatertalk.org/)

•recorded another session of "Stagecraft," my BroadwayRadio podcast, which this week features a conversation with Rajiv Joseph that you can find at bit.ly/stagecraftpodcast)

•edited stories for the journalism class I teach

•shopped for, cooked and hosted (along with my always-supportive husband K) our extended family's annual Thanksgiving dinner

I'm exhausted just typing that list. So I'm taking time out to recuperate.  But I'll be back next week and I hope you will be too.
No comments: 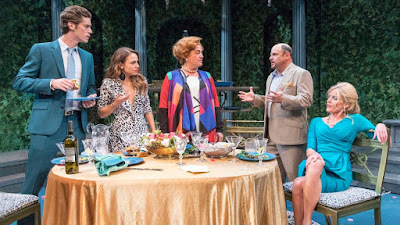 The true star of the production is John Lee Beatty's revolving set, which presents one faux-elegant setting after another and drew the loudest applause at the performance I attended and fidgeted my way through.
No comments: 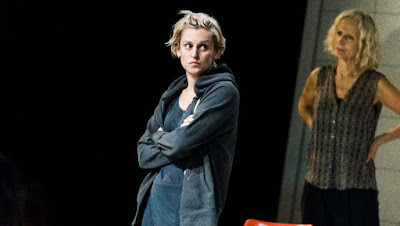 The story that British playwright Duncan Macmillan tells in People, Places & Things isn't new. But the brilliant way in which this tale about a woman's struggles with alcoholism and addiction is told deserves all the accolades that the production running at St. Ann's Warehouse through Dec. 3 has been getting.

Much of the praise has been heaped on Denise Gough who portrays an actress called Emma who hits rocks bottom onstage during a performance of Chekhov's The Seagull, enters rehab with a bottle in one hand and some grams of coke in the other and then tries to bluff her way through recovery. Until she's forced to face her demons.

It's a demanding role that requires the actress playing Emma to be simultaneously funny and poignant and, as the Olivier Award she won for her performance during last year's run at London's National Theatre attests, Gough totally delivers.

The actress has said that she hadn't worked for a year before getting the part and had even considered quitting the profession. She smartly uses all that disappointment and desperation she must have felt back then to fuel her finely tuned portrayal of Emma  (click here to read an interview with her).

Still, I'm saving my loudest hurrahs for the totally imaginative staging by Jeremy Herrin that includes dance-club music and choreographed segments. And for the inventive set design by Bunny Christie that mimics the stark white-tiled interior of a hospital but regularly erupts into psychedelic fever dreams.

Equally dazzling are the lighting by James Farncombe, video projections by Andrzej Goulding and sound design by Tom Gibbons. All of it made all the more impressive because St. Ann's has been transformed into sports-arena style seating that places the audience on both sides of the playing space.

The Brits excel at this unabashedly flamboyant style of storytelling (Herrin also wrote the visceral adaptation of 1984 that ended its run last month) and the kinetic stagecraft is well used here as the onstage action moves in and out of Emma's mind.

Similarly, although some actors double in roles, the choice to have them do so seems more dramaturgically driven than economically motivated. The entire cast is excellent, although a special shout-out must go to Barbara Marten, whose main role is as Emma's therapist but most affecting one comes later in the evening (don't look at your program until after the show).

Herrin tacitly acknowledges the clichés that come with telling a story about the struggle to overcome substance abuse but he spices up his version with truly witty dialog. He also juxtaposes Emma's addiction against the backdrop of her theatrical career, drawing parallels between the artifice essential to each.

"Truth is difficult when you lie for a living," Emma tells the members of her therapy group as they all practice the behaviors they want to perform in the outside world. The make-believe serves as an insulation from pain for Emma, which makes the final two scenes of People, Places & Things all the more devastating for her and the play all the more memorable for those of us lucky enough to see it.
No comments: 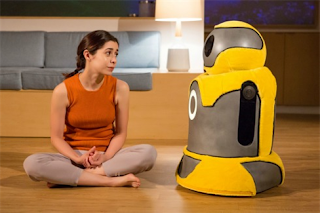