Turning on the Ghost Light, Again 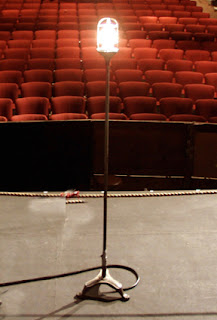 I know. I know. This is two Saturdays in a row that I've turned on the ghost light, signaling a temporary pause in these posts. But what can I tell you?  It's a crazy time and I'm seeing so many shows (and juggling so many other things in the non-theater parts of my life) that I can't find the time to write about what I've seen.  But I will.  And I hope you will come back to read about those shows and about all the hoopla of the awards season that will follow the announcement of the Tony nominations this coming Tuesday morning.
No comments:

People who love musicals really seem to love The Last Five Years. In fact, those who saw the original 2002 production are still singing its praises. And there have reportedly been over 3,500 productions of the show since then (including one now running through April 28 at the Signature Theatre in Arlington, Va.). Plus a movie version is scheduled to begin filming this summer with Jeremy Jordan and Anna Kendrick.

I missed the original production, which starred Sherie Rene Scott and Norbert Leo Butz, so I bought a ticket to the revival currently playing at Second Stage Theatre through May 18, to see what all the fuss has been about.

Now, this is the point in the post where regular readers might expect me to say something like “it’s not about much.”  But I’m not going to say that.  Because it’s easy to understand why this small show (it runs 90 minutes, has just two characters and the original orchestration calls for a six-member orchestra, two of whom are cellist) is so adored.

For starters, it has a great score by Jason Robert Brown that sits right at the crossroad between the Broadway sound that traditionalists love and the more contemporary pop vibe that can draw in new audiences.

Also, like so many beloved musicals, its sung-through book, also by Brown, has a showbiz setting:  it tracks the five-year relationship of a writer named Jamie and an actress named Cathy as his career soars and hers stagnates. The fact that the story is based on Brown’s own failed first marriage adds an extra frisson.

So what’s not to love?  Well, there is the fact that the story unfolds in a series of scenes that crisscross one another in time. His part starts as he’s getting ready for their first date and ends with his decision to walk out of the marriage. Hers begins with the pain of the relationship’s end and moves back in time to the giddy hopefulness of their first kiss.

It’s a clever conceit.  But it’s also as confusing as hell. And although Brown’s direction (he’s kind of a one-man band for this production) is elegant, it doesn’t help clarify what’s going on (click here to listen to an interview he did with NPR.)

I kept trying to figure out where in the timeline each song fell and to match up the his and hers moments of elation, frustration and disillusion.  But I failed and simply ended up treating each song as its own little story.  Which somewhat undercuts the emotion of the whole piece.

Luckily, the performances by Adam Kantor and Betsy Wolfe are so strong that the conceit doesn’t undermine the entire evening. He adds self-awareness to the jerk that Jamie can be.  She makes clear the battle between love and envy that is roiling inside Cathy.  And both actors have got great pipes.

Because they interact so little, it’s hard to feel the connection between the characters but I felt a kinship with each of them, as though I were the friend in whom each was confiding his or her version of the marriage.

In the end, their story evoked memories of the happy and sad moments that defined my own past relationships and allowed me to forgive, at least a bit, the transgressions that those lovers—and I—had committed.

How can you not love a show that does that?
No comments:

Getting a Kick Out of "Kinky Boots" 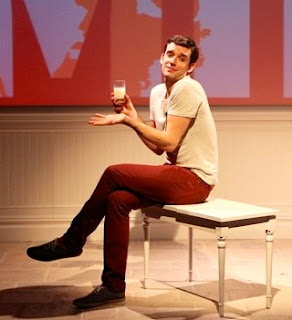