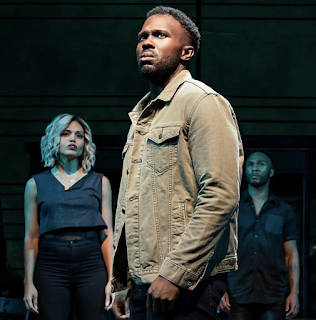 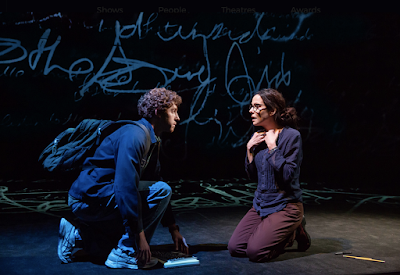 As some of you know, I host a podcast for BroadwayRadio in which I interview playwrights and musical book writers about their shows.  I've had some great conversations (click here to listen to some of them) and I really enjoy doing them. But there is a downside: if I like a show, I try to talk to its author instead of writing about it.

This means that increasingly the shows I write about here are ones that I haven't been particularly fond of. And I'm starting to worry that this makes me seem like a perpetual naysayer when, of course, I'm a person who loves theater.

So instead of posting a review this week, I'm taking time out to call your attention to an interview I did with Will Arbery, whose Heroes of the Fourth Turning, a fascinating play about a group of young conservatives, is currently running at Playwrights Horizons (you can listen to it by clicking here.)

And I hope you'll also read a piece I did for the online publication TDF Stages about Will Hochman, the young actor who is appearing opposite Mary-Louise Parker in Adam Rapp's sensational new two-hander The Sound Inside, which opened at Studio 54 this week (you can read it by clicking here).

If I'd reviewed either of those shows here, I'd have told you how much I really like them and would have urged you to go see them.  Which is what I'm doing now.
No comments:

Labels: Heroes of the Fourth Turning, The Sound Inside

"The Great Society" Is, Sadly, Not Great 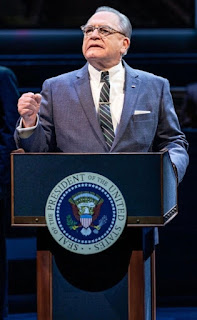 Lyndon Johnson has long been one of my favorite presidents. I know that’s heresy for a baby boomer like me to say. Johnson was a big, crude Texan who famously bullied people, regularly used the N-word and disastrously widened the war in Vietnam. But he was also committed from his earliest days to making life better for poor people and he summoned up all of his political power to push through the Civil Rights Act of 1964. Plus he was the kind of larger-than-life character who might have propelled a Greek tragedy or a Shakespearean drama. And so I was intrigued by Robert Schenkkan’s decision to write a two-part play about him.

The first, All the Way, dealt with the glory days of the Johnson presidency, chronicling his campaigns to pass the civil rights bill and to defeat Barry Goldwater in the 1964 election. I had mixed feelings about that show but it won the Tony for the best play of 2014.  And like everyone else, I was wowed by Bryan Cranston’s vibrant performance as LBJ, which won him a Tony too.

Now has come the sequel, The Great Society, which is scheduled to run at Lincoln Center Theater’s Vivian Beaumont Theater through Nov. 24. It focuses on the administration’s darker days as Johnson struggled to balance the growing demands of the war in Southeast Asia, his futile attempts to keep the peace as African-Americans became more militant in pursuit of their rights and his continuing desire to fight poverty with the programs whose collective sobriquet gives the show its title.

It’s a tale of hubris that’s inherently dramatic but Schenkkan and director Bill Rauch fail to bring it to life. Except for an attempted accent here or there, almost none of the 14 actors in the cast look or sound like their real-life counterparts. And that includes the Scottish actor Brian Cox, who comes off as more of a feisty bull dog than the fearsome Grizzly bear that Johnson was.

Cox is a gifted actor who has won acclaim for playing King Lear for London's Royal Shakespeare Company and the domineering billionaire patriarch on the HBO series “Sucession.” And he works hard here to show the more sympathetic side of Johnson that Schenkkan clearly wants to bring out (click here to read an interview with the actor).

But try though he might, Cox doesn’t manage to convey the emotional journey that Johnson took to get there. One minute he's the wily politician bending others to his will; the next he’s a man hollowed out by the compromises he’s been forced to make. What we don’t see, or at least feel, is how he got from the first point to the last, which is, of course, this story’s true tragedy.

The storytelling is also undercut by having all of the other actors play multiple characters. Rauch has assembled an impressive ensemble that includes Grantham Coleman, Marc Kudisch, Bryce Pinkham, Frank Wood and Richard Thomas. But though they change wigs and outfits, it’s still hard to keep track of who is who when, for example, the same actor plays Richard Nixon and George Wallace. Or when another actor plays three different aides to Martin Luther King Jr.

Speaking of which why does the show need all three of those aides?  I doubt that most of today's audience members will be familiar with Bob Moses, Hosea Williams, or the Rev. James Dobynes. Or for that matter with the Johnson men Clark Clifford, Deke Deloach or William Westmoreland.

The production seems to know that too since the program includes an insert with mini-descriptions of the three dozen or so principal characters. The befuddled woman seated next to me took out her cellphone during the middle of the first act, turned on its flashlight app and vainly tried to match the names on the card to the actors onstage.

The entire 2-hour-and-40 minute-evening is similarly frustrating. For it's little more than a historical pageant in which famous (or not so famous) figures show up, have someone call them by their name to let the audience know who they are and then walk off after saying, or shouting (there's a lot of shouting) a few lines.

The history is wobbly too. Johnson and King meet so regularly in The Great Society that you might wonder how either found time to do anything else.  And while Johnson did have a black secretary just as he does in the show, her real life story unspooled very differently and so didn’t have the impact on a crucial decision that the president makes in this version.

When you get right down to it, I can’t figure out why Schenkkan decided to write these docudramas. He hasn’t really dramatized Johnson’s story and he doesn’t offer any new revelations about his presidency or any useful parallels with the current occupant of the office. LBJ had his flaws but he deserves better than this.