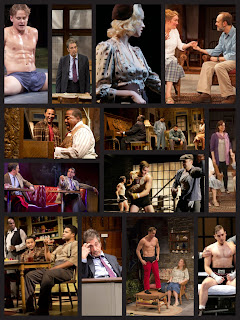 So many shows, so little time.  And since the traditional January post-holiday reaping is now here, they’re closing faster than I can write about them.

Some of those closings—like the recently departed Dead Accounts—were earlier than expected but other shows are simply finishing up their planned, or even extended, runs.  So I’m going to squeeze in a brief farewell to four that are departing this weekend with a nod to the highlights and lowlights of each:

GLENGARRY GLEN ROSS: There’s no question why producers anted up for this revival of David Mamet’s classic play about scheming real estate salesman: Al Pacino wanted to do it.  And people clearly wanted to see him do it, paying up to $360 for premium seats.

Highlight:  Getting to see Pacino on stage.  Now, 72, he still takes such obvious delight in being onstage that it’s a treat to watch him there, even when, as in this case, he just seems to be playing Pacino.

Lowlight: Director Daniel Sullivan’s apparent inability to control his actors.  The result is that each member of the seven-man cast performs as though he’s in some hammy old opera production in which each one gets to stand center stage deliver his aria and then smugly wait for approbation.

GOLDEN BOY: Sixty years have passed since Clifford Odets’ melodrama about an immigrant kid torn between careers as a violinist and a boxer last played on Broadway. So it was great to have the chance to see Lincoln Center Theater’s elegant revival at the Belasco Theatre, the same place where the original Group Theatre production opened in 1937.

Highlight: Tony Shalhoub’s nuanced performance as the boy’s father and Yvonne Strahovski’s career-making turn as the woman he loves.

Lowlight: The belabored Neew Yawk accents everyone affected that sounded as authentic as a ham sandwich at a kosher dairy restaurant.

Highlight: the stirring chain-gang song the male members of the cast perform that almost stops the show.

Lowlight: As good as the production was, I wish it hadn’t so closely echoed the 1990 original.

VANYA AND SONIA AND MASHA AND SPIKE: Playwright Christopher Durang and a starry cast that includes Sigourney Weaver and David Hyde Pierce update and poke affectionate fun at Chekhov in this amiable new comedy at Lincoln Center's Mitzi Newhouse theater.

The lowlight:  Two acts seem to stretch the jokes further than they need to go.