An Exchange Between Signature Theatre & Me 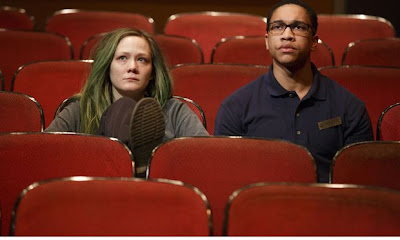 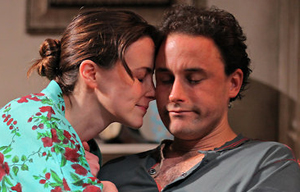 
All this and some other stuff—Abby’s decision to quit her antidepressant medication, Zach’s over fondness for weed—is thrown into the pot during the first 10 minutes and director Anne Kauffman keeps it at a high simmer.  But neither she nor Herzog, who according to the Playbill has been working on the play since 2007 and put it through three complete rewrites, makes it clear why we should care about this couple.
It does help that Abby and Zach are played by the attractive and talented Maria Dizzia and Greg Keller but not enough. Tidbits are doled out over the next hour and 40 minutes that reveal more about the couple and some major secrets are disclosed in the closing scene but they all add up to a picture of an improbable marriage and it’s hard to draw any life lessons from it since few marriages are based on lies to the extent that this one is.
But it’s the final scene that really made me cranky.  It, too, involved people silently cleaning up an untidy space.  And doing it for such a long time that I’m beginning to think that brooms should be banished from all plays, unless they’re directly associated with witches or wizards.
2 comments:

"Talley's Folly" is a Serious Treat