The end of the year has sneaked up on me. I got lost in the whir of finishing the school semester where I teach, getting ready for Christmas and dealing with some health problems (nothing serious: a bad cold and a lingering foot injury). But I’ve found time to read the year-end 10 Best lists, including the round-up of them that my blogger pal Jonathan Mandell puts together every year and which you can find by clicking here.

These lists always make me smile because, of course, there is no absolute best. I counted more than 50 different shows that popped up on the nearly two dozen 10 Best lists I saw or heard on podcasts. And even a much-admired show like The Ferryman failed to make the cut for some critics.

That’s in part because there was so much good stuff to see year.  But it's also because theater is a conversation between the people who make a show and each of us who is lucky enough to see it. And how we come out feeling about a show depends on all kinds of things from how an actor performed his part to whether he looks like an old boyfriend, from how well a playwright explores a theme to whether that theme is an issue that touches us personally, from the magic of the stagecraft to how much we needed a good laugh or a quiet cry that day.

So, with all that in mind, here, in my usual cop-out alphabetical order, are 10 shows that, for various reasons, stood out for me from the nearly 140 shows I saw this year:

Edward Albee's At Home at the Zoo: Signature Theatre Company’s revival of these one-act plays written at the beginning and the end of Albee’s career was brilliantly directed by Lila Neugebauer and performed by a stellar cast that deftly walked the tightrope between the cool intellectualism and the visceral emotionalism that this late great playwright’s work demands.

The Ferryman: If I were doing a numbered list, Jez Butterworth’s magnificent family drama set against the back drop of the Irish troubles would be at the top. I was exhilarated by Butterworth’s simultaneously lucid and lyrical storytelling, the uniformly superb performances of the show’s 21-member cast (including a scene-stealing baby) and the nimble staging of director Sam Mendes and his design crew, top-notch from set to sound.

Fiddler on the Roof in Yiddish: The trendy way to revive an old musical nowadays seems to be to try to make it fit more with our contemporary sensibilities. But under the astute direction of Joel Grey, The National Yiddish Theatre's production of the classic Jerry Bock-Sheldon Harnick musical based on the shtetl stories of Sholem Aleichem has taken a different approach: performing the show in the language its Jewish characters would actually have spoken in the 19th century and treating their traditions with reverence. The result is surprisingly fresh and deeply moving.

Harry Potter and the Cursed Child: Naysayers grumble that this show didn’t deserve its Tony for Best Play but this sequel to J.K. Rowling’s stories about the adventures of a boy wizard and his friends is filled with the kind of good old-fashioned storytelling by Jack Thorne and spectacular stage magic created by director John Tiffany and movement specialist Steven Hoggett that will appeal to the kids who grew up on the Potter books, the kids they’re now raising and kids at heart like me.

The Jungle: Immersive shows were a growing trend in 2018 but this one at St. Ann's Warehouse the Park Avenue Armory stood apart. It set theatergoers in the mdist of a refugee camp that once existed in Calais, France and housed scores of refugees from Afghanistan, Syria, Somalia and other war-ravaged countries, all desperately hoping to start a new life in Europe. Some of the actors once lived in the real-life camp but all of them—whether playing camp leaders, relief workers or smugglers—were superbly affecting.

Lewiston/Clarkston: The Rattlestick Theater transformed its playing space to house the changing physical and emotional landscape of the American West in Samuel D. Hunter’s linked one-acts set in contemporary towns named for the 19th century explorers Meriwether Lewis and John Clark. A chicken dinner was served in the break between the plays (offering food themed to shows was another trend this year) and the actors moved around the 51 people lucky enough to attend each performance but director Davis McCallum and his impressive cast maintained an aching authenticity throughout.

On Beckett: Drawing on his finely-honed skills as both a trained clown and a serious tragedian, Bill Irwin proved the perfect guide into the sometimes-inscrutable works of the absurdist playwright Samuel Beckett. And this one-man show at The Irish Repertory Theatre, which Irwin both wrote and directed, was a master class in acting and a love letter to theater making.

Slave Play: The trend that most impressed me this year was the growing number of shows that broke taboos—societal and theatrical—to look at the knotty issue of race in new ways. I could have chosen Pass Over, Antoinette Nwandu’s riff on Waiting for Godot; Jackie Sibblies Drury’s genre-bending Fairview or Aleshea Harris’ What to Send Up When It Goes Down, each deliberately unsettling and thoroughly thought-provoking. But I’m going with New York Theatre Workshop's production of this one by Jeremy O. Harris because it’s the most intimate of the genre and because its final scene was so unflinchingly raw and honest that it shook me to my core.

Sugar in Our Wounds: Identifying as an Afro-queer playwright, Donja R. Love has written a trilogy that deals with the experience of being gay and black at pivotal points in American history. This first, which played at Manhattan Theatre Club, was set on a southern plantation during the Civil War, where a group of slaves dream of freedom and two of the men unexpectedly fall in love. Director Saheem Ali created a lovely frame for Love’s lyrical language and passionate story and the audience the night I saw the show was filled with weeping male couples, grateful to see themselves finally reflected in history.
Usual Girls: Several plays by promising young female playwrights offered glimpses of how difficult it still is to be a young woman coming of age in this society. Clare Barron’s Dance Nation popped up on many Top 10 lists and I liked it a lot too. But I was struck even more by the Roundabout Underground's production of this one by Ming Peiffer, which tells the story of a young Korean-American woman struggling with sexism, racism and the damage that oppressed people can turn on themselves. Under Tyne Rafaeli's flint-eyed direction, it managed to be equal parts raunchy, funny and heartbreaking.

As I said, it was a great year for theater.  Here's hoping that 2019 brings us just as much to cheer. In the meantime, I wish you and yours good health, much happiness and the chance to see as many shows as your heart desires. 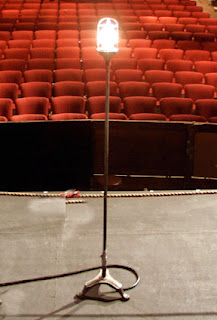 Life has gotten crazy again and I couldn't find the time to write this week. So as I usually do when this happens, I'm turning on the ghost light that theaters use when they're temporarily empty. I do hope to get back on track next week but in the meantime, I did manage to do an interview with playwright Christopher Demos-Brown for Stagecraft, the podcast series I do for BroadwayRadio. Brown is making an auspicious Broadway debut with American Son, a contemporary drama that stars Kerry Washington, Steven Pasquale, Jeremy Jordan and Eugene Lee. You can listen to our conversation about the show by clicking here.
No comments: 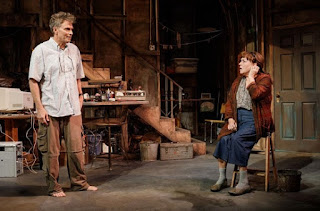