"Nobody Loves You" is Silly...But Loveable

When you add it all up, The Unavoidable Disappearance of Tom Durnin, like its title character, simply fails to pay off.
No comments:

“Choir Boy” Tries to Sing Too Many Notes 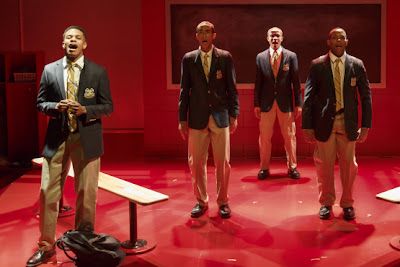 Choir Boy isn’t a musical but the best thing about it is the singing. Now playing at the Manhattan Theatre Club’s studio space at New York City Center through Aug. 4, this ambitious work about a choral group at an African-American prep school is the latest offering from the young playwright Tarell Alvin McCraney.

And that was enough to make me want to see it. For the day I spent watching a marathon of The Brother/Sister Plays, McCraney’s trilogy about a poor black community in Louisiana, was one of the finest experiences I’ve ever had in the theater (click here to read my review).

I’m not alone in my admiration for McCraney either. He won the top playwriting award when he graduated from the Yale School of Drama in 2007. And since then, his kudos have included becoming the first recipient of the New York Times Outstanding Playwright Award and winning London’s Evening Standard’s award for Most Promising Playwright, the Steinberg Playwright Award, the Whiting Writers Award and the Paula Vogel Playwriting Award.

On top of all that, he spent two years as a writer in residence at the Royal Shakespeare Company. And most critics—both here and in London, where this show debuted last year—have raved about Choir Boy too (click here to read some of the New York reviews). But, alas, I felt let down by it.

As I said above, Choir Boy is an ambitious work. And McCraney gets points for focusing on a different part of the black experience. African-American choral groups such as the Fisk Jubilee Singers played a central role in historically black schools (click here to read more about them).

The Negro spirituals in which those groups specialize have been revered as a secret code that slaves used to communicate with one another. They've also become a cherished legacy for both blacks and whites. But McCraney suggests that now, in this sesquicentennial year of the Emancipation Proclamation, we should look at the songs anew.

It’s a daring idea and McCraney lays it out in an impassioned monolog. No playwright working today is better at mixing vernacular and lyrical language.

He also uses a-capella versions of the songs to demonstrate his theory—and to underscore the themes in the play (click here to read about how the music was woven into the show). If he had stuck solely to that, he might have created another brilliant piece of work.

Instead, Choir Boy also attempts to be a coming-of-age story and a coming-out tale. And McCraney gets overwhelmed as he tries to keep all those balls in the air.

The play’s central character is Pharus, the effeminate lead singer of his school’s lionized choir. Played with puckish panache by the 21-year-old actor Jeremy Pope, Pharus is both brazenly flamboyant and sexually insecure. (Click here to read a Q&A with the actor.)

McCraney, too, tries to play it both ways. At times, his classmates are surprisingly accepting of Pharus, especially his jock roommate. At other times, Pharus is subject to the kind of homophobic bullying that inspired the “It Gets Better” campaign: the play begins when a classmate interrupts a performance Pharus is giving by shouting out epithets and the intolerance later escalates to a climactic act of violence.

Plus there are the boys' uneasy relationships with their families and with their sense of faith. That’s a lot to cram into 90 minutes.

Director Trip Cullman provides a steady course, assisted by David Zinn’s clever set. And the cast—five young actors who play the students, along with the vets Chuck Cooper as the school’s anxious headmaster and Austin Pendleton as a retired white teacher whose devotion to the Civil Rights Movement brought him to the school—is  wholly first rate.

But none of that is enough to keep the show from unspooling into a melodramatic muddle. What still makes it worth seeing, though, are the songs, handpicked by McCraney and beautifully arranged by Jason Michael Webb. When the boys are singing, Choir Boy achieves an emotional catharsis that the rest of the play can only aspire to.
2 comments:

The Explorers Club is a Delightful Discovery 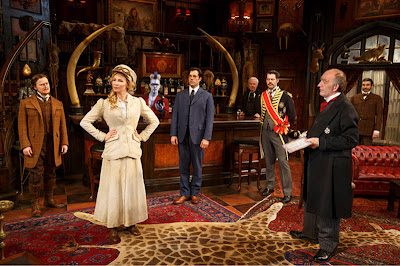