Why "Me and Jezebel" Isn't for Me 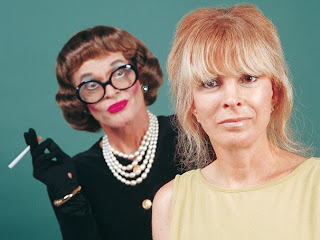 We're all obsessed with celebrity these days and almost everyone (me included) has a story to tell about an encounter with one. Writer Elizabeth Fuller’s was with the movie star Bette Davis and she turned it into a book and then a play, both called Me and Jezebel. Readers seem to have loved the book; it’s got five stars on Amazon.com and earlier this year, one Goodreads’ reviewer declared “I challenge anyone to read this and not laugh at Bette's witty ripostes and much-earned wisdom.”

The play has fared less well. Wen it opened in 1994, New York Times critic David Richards wrote “this gossipy evening is just a string of anecdotes that goes on too long and amounts to too little.”  That’s even more true with the wan revival that opened at The Snapple Theater this week.
I’ve no idea why the producers decided to bring this show back. The original’s reviews weren’t encouraging.  Davis, who died in 1989, is less familiar to audiences today who cheer on Meryl Streep and Helen Mirren in the kinds of strong-woman roles she helped pioneer.

Meanwhile, the camp followers who might have been the show’s natural constituency are busy making wedding plans or lobbying for the right to get hitched in all 50 states.
The people in the audience the night my friend Jesse and I saw the show seemed totally bemused by it. They looked to be tourists whose tour package included a voucher to see a show and I’m not sure most of them knew what they'd be seeing or even who Davis was.

The story of Me and Jezebel (the title refers to Davis’ second Oscar-winning role) centers around the actress’s request to spend a couple of nights with Fuller and her family during a hotel strike in New York.  The two women had only recently met but Fuller is thrilled with the idea of playing host to a movie star. Then, in The Man Who Came To Dinner fashion, Davis stays on far longer than expected.  Hilarity is supposed to ensue.

As she did in the original production, Fuller plays herself. Davis is played by Kelly Moore, a male actor whose bio says he has “brought Bette Davis to life for the past 17 years, from Key West to Kansas City and Connecticut to Sydney.”

Fuller fluffed a few lines at our performance.  But Moore is pretty good at his job. Alas, the dialog in this two-hander strains to include all the Davis one-liners that drag queens, cigarettes waving in the air, have been braying for years and it’s hard for him to move beyond those clichés.

Plus, the show has the misfortune to follow closely on the heels of Bette Midler’s amusing portrayal of the Hollywood agent Sue Mengers in I’ll Eat You Last and Michael Urie’s brilliant rendering of Barbra Streisand in Buyer & Cellar, both of which give the sense that we're learning something more about the person beneath the celebrated façade. Me and Jezebel stays flat-footedly on the surface.

I feel badly about dumping on this little show.  Both Fuller and Moore clearly want to entertain.  But while Me and Jezebel may be innocuous, it’s also vacuous.

Labels: Me and Jezebel