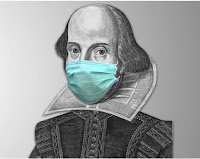 People are getting vaccinated, some at a new site right in the middle of New York City's Theater District (click here to read more about that). Meanwhile, theaters are taking steps to reopen with distantly spaced performances, outdoor productions and even more robust plans for the fall. It’s still too soon to declare an end to this dreadful pandemic but I’m already looking forward to the creative work that it will inspire, the changes in what stories will be told, how they'll be told and the people who will get to tell them. As most theater lovers know, Shakespeare, whose 457th birthday we celebrate today, wrote King Lear, Macbeth and Antony and Cleopatra when the plague forced London theaters to close in 1606 (click here for more on that). So who knows what imaginative gifts await us? In the meantime, Happy Birthday to the Bard, and do keep wearing your masks.
No comments:

Introducing My New "All the Drama" podcast 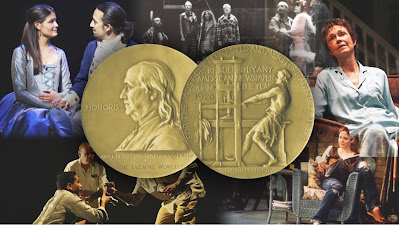 As some of you know, I’m a contributor to BroadwayRadio and over the past few years, I’ve hosted “Stagecraft,” a show that talks to playwrights and musical book writers about their recent shows (click here to check out some of those episodes). I’ve also occasionally participated in “This Week on Broadway,” the network’s flagship Sunday show that, in normal times, reviews new productions and in recent times, has talked with all kinds of theater folks about the projects they’ve been developing while the theaters have been closed. But now I’ve got something else to share.

I’m starting a brand new podcast called “All the Drama” that will go in-depth on all the shows that have won the Pulitzer Prize over the last 100+ years. Each episode will explore one of those plays or musicals (10 of the latter have won the prize). I’ll tell you a little about the show and the person (or persons) who created it and I’ll talk to people who have insights into why that show is so special and how it fits into the theatrical canon.

The first episode on a comedy called Why Marry?, which was the very first show to win a Pulitzer back in 1918, is being released today to our Patreon subscribers (so please consider signing up for that at patreon.com/broadwayradio). A second on the 2004 winner I Am My Own Wife, including a conversation with its playwright Doug Wright, will be available for the Patreon folks next month. We’ll release both of those to the general public and begin our regular schedule when the Pulitzers are announced in June.

I’m really excited about this so I hope you’ll join me on this new journey through the very best American shows ever produced.