"The Convent" in Uninspiring 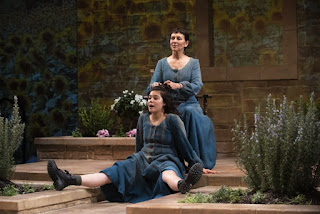 The Convent, the new play by Jessica Dickey, is like a mashup of Bess Wohl’s Small Mouth Sounds about a disparate group of people trying to find themselves on a spiritual retreat, and Caryl Churchill’s Top Girls, which starts off with an imaginary dinner party attended by famous women from history. Alas, this new work, now playing at The A.R.T./New York Theatres thru Feb. 17, is nowhere near as good as either.

And that saddens me because I had been a great fan of Dickey’s debut play The Amish Project, which is not only a sensitive recreation of the 2006 slaughter of five young girls in a one-room Amish school in Lancaster County, Pennsylvania, but a rare theatrical meditation on the grace of faith (click here to read my review of that one).

Faith plays a role in the new play too. Dickey says she wrote it during a period of emotional upheaval in her own life (click here to read more about that) and this time out, she places a group of contemporary women of various ages and personality types at a retreat in a medieval convent in the south of France, where they ditch their cellphones, don peasant gowns and seek inspiration from the lives of female saints like Teresa of Avila and Hildegard of Bingen as they try to sort through the problems in their lives.

The convent is led by a sixtysomething woman called the Mother Abbess (Wendy vanden Heuvel) who hands out Oprahesque platitudes and hallucinogenic-spiked drinks to help the process along. It’s not a bad premise but the plot gets hijacked when a rebellious woman (Samantha Soule) shows up at the convent, flouting its rules, flirting with the other participants and dropping heavy hints that she knows secrets that could create additional havoc, even though the eventual revelation is hardly a surprise.

Meanwhile, each of the other women strikes the one note the play has assigned her—the ditzy free spirit, the good-girl high achiever, the innocent naïf, the repressed do-gooder and, in the sole novel twist, a nun who’s lost her faith—over and over again. They’re not given much in the way of motivation or backstory but each gets the chance to chew the tapestry and under Daniel Talbott’s lax direction, they gnaw away to varying effect.

The one saving grace for this production is the set by scenic designer Raul Abrego who seats the audience on opposite sides of a transverse and then projects images created by Katherine Freer on large screens at either end to simulate the chapel, refectory and gardens of the cloister. Their work sparks a sense of wonder that the play itself only aspires to. 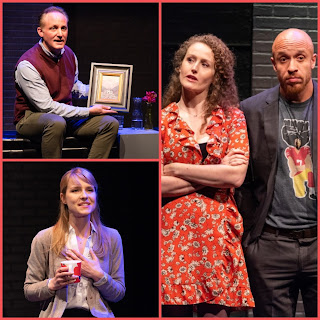 Transgression—social, sexual and otherwise—has been the bread and butter of Neil LaBute’s career. It might be the downfall of it too. Last year, allegations about some unidentified misconduct caused theater organizations such as MCC Theater, 59E59 Theaters and others to sever longstanding ties with him (click here to read more about that).

And so it’s hard to put all of that aside when looking at this year’s iteration of the annual LaBute New Theater Festival, a trio of one-acts that opened at the Davenport Theater this week. And I don’t think LaBute intended us to. For these plays, metaphorical stations of the cross in public shaming, struck me as his attempt to make us think about the way he believes he’s been treated.

The first and final pieces are character studies in which one actor addresses the audience directly. Karl, the sole character in the opening monologue The Fourth Reich, matter-of-factly offers the argument that the major reason Hitler has such a heinous reputation is because he lost the war, leaving the people who defeated him to portray him as the epitome of evil.

This, of course, overlooks Hitler’s complicity in exterminating millions of innocent people. But that’s not the way Karl sees it. “You get to write the history when you win,” he says, noting that Ulysses S. Grant oversaw the genocide of Native Americans but is nonetheless regarded as an American hero. “And what about me?,” Karl asks, no doubt channeling LaBute's own sentiments. “Should I be tossed out in the garbage ‘cause  of one bad thing I did, years ago, when I was a kid?”

Katie, the young woman in the closing monologue Unlikely Japan, wrestles with that question too. She confides that she’s mourning her high-school boyfriend who was recently killed in a mass shooting. Her grief is mainly driven by her fear that dumping him 10 years ago set off a chain of events that landed him in the place where the massacre occurred. Her guilt raises the butterfly-effect-like question of whether one careless misdeed can lead to disastrous results.

These bookend reveries, the first directed by John Pierson and the second by LaBute himself, are well performed by Eric Dean White and Gia Crovatin but they’re slight works. And, if I’m going to be honest, they’re annoying too, striking me as the kind of weaselly why-is-everybody-always-picking-on-me or how-was-I-supposed-to-know-it-would-turn-out-like-that excuses kids give when they don’t want to take responsibility for their own actions.

The middle play, a two-hander also directed by Pierson, is more substantial than the other two but I winced when I first saw its title: Great Negro Works of Art. It wasn’t just the anachronistic word but the fact that race is such a hot-wire issue and I wasn’t sure how a provocateur like LaBute would handle it.

His approach here is to view racial dynamics and political correctness through the prism of a first date between a white woman and a black man who’ve met on an internet dating site. The woman Jerri, played with appropriate blind-date jitteriness by Brenda Meaney, chose a museum showing the titular exhibit for their first face-to-face encounter. The man Tom, a layered performance by Keilyn Durrel Jones, arrives late bearing flowers and a tendency to hide behind humor when he’s nervous.

Each is openly attracted to the other but their attempts at small talk quickly dissolve into a debate over semantics (what does it mean to lie) and sensibilities (should lawn jockeys be considered works of art or symbols of oppression). They struggle to find common ground by telling one another that people are too sensitive about subjects like gender and race and that everyone should just say what they feel. But each time one of them tries to do that, the other misinterprets what’s being said.

Presented separately, these three plays might seem no more than routine additions to the LaBute canon of provocative characters and uneasy situations designed to throw viewers off balance. But taken together, they add up to a declaration that truth is merely the property of whoever is telling a tale. Which makes me sad because although I’m a longtime LaBute fan, Hitler is Hitler and however you tell his story, millions of people died because of him.
No comments:

A (Brief) Break From Regular Programming 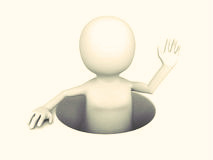 Yep; I've slipped back into a hole that’s going to keep me from doing a regular post today. But this isn't a disagreeable hole. I fell into it by (1) reading two fascinating books about 19th century theater for a review I've been asked to write, (2) celebrating my wedding anniversary with my adored husband K and (3) appearing on a panel with my BroadwayRadio colleagues at this year's BroadwayCon on the morning this is posted. But things should settle down next week. I've got some shows lined up to see and am already looking forward to sharing my thoughts about them with you. So hope to see you again then.
No comments: 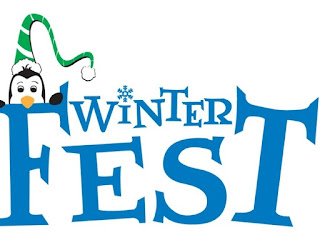