"Lackawanna Blues" and Other Laments 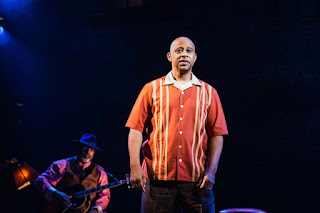 Eight plays written by black playwrights are scheduled to open on Broadway this fall. That’s twice the number of all the shows by black playwrights that opened on the too-aptly named Great White Way in the five seasons before the pandemic shutdown. So this is a good development, particularly because we’re talking about straight plays and not musicals where black creators have traditionally been given a little more leeway (although only four of them opened during that five-season period).

However to my surprise, my response has been somewhat mixed. Of course I’m happy for the playwrights, be they newcomers like Keenan Scott II, the author of the poetry-driven Thoughts of a Colored Man, and Douglas Lyon, who created the family comedy Chicken & Biscuits, or seasoned vets like Ruben Santiago-Hudson, whose wistful memory play Lackawanna Blues I saw this week, and Lynn Nottage, the only female playwright to have won two Pulitzers, who is gearing up three shows for this season (the Michael Jackson musical MJ, an opera version of her 2003 play Intimate Apparel and a brand new work Clyde’s).

But I also feel uncomfortable that these shows are getting their shot at a time when many people are still skittish about the idea of sitting among strangers in an enclosed theater. Producers aren’t releasing grosses this fall but word-of-mouth suggests that the shows aren’t selling out. I worry that this will be misused as evidence that black shows can’t do well on Broadway.

And to be honest, I’m also uncomfortable about sharing some of these stories with people who aren’t black. I haven’t yet seen Thoughts of a Colored Man but I can’t help noticing that while many white critics are praising its insights into black manhood, some black critics have pointed out that its portrayal of black men doesn’t fit at all with their lived experience. “All the talk just adds up to a collection of tropes,” wrote the New Yorker’s critic Vinson Cunningham. “This ‘colored man’ kept thinking, Speak for yourself.”

I didn’t have any trouble identifying with Santiago-Hudson’s tribute to his beloved foster mother and the metaphorical village of people who helped her raise him and who are all commemorated in Lackawanna Blues, a show Santiago-Hudson first performed at the Public Theater in 2001.

Called Nanny by most everyone in the eponymous factory town in upstate New York where she lived, Santiago-Hudson’s foster mother ran a boarding house that catered to and cared for the physically and emotionally crippled, the kind of people who today end up in homeless shelters or on street corners. As Santiago-Hudson tells it, “Nanny was like the government if it really worked.”

A Tony-winner for best featured actor in August Wilson’s Seven Guitars and a Tony-nominated director for the 2017 revival of Wilson’s Jitney (click here to read more about him) Santiago-Hudson has directed himself here and plays all the roles, assisted only by guitarist Junior Mack who provides the blues underscoring.

The result is a virtuosic performance, with Santiago-Hudson switching effortlessly from one of some 20 characters to another. It's a feat that's all the more impressive because Santiago-Hudson has been plagued by a back injury that caused him to miss some performances early in the run, although there was no trace of that as he nimbly scampered around the stage at my matinee.

But I particularly appreciated the memories he shared. Like Santiago-Hudson, I grew up in a tight-knit black community in the 1950s and ‘60s, when the unemployment rate hovered around 4% and black men, even those without much education, could find good-paying jobs. Families who had moved north for that work still hung onto the folkways of their southern or Caribbean roots.

I knew men who, like the characters in the play, went by colorful nicknames like Suitcase, Shoebrush and Little Bill.  My mother hosted off-the-books card games and sold fried chicken dinners and fish sandwiches to make a few extra dollars just like Nanny does in the show. And I often watched neighbors calm violent outbursts by men who had been damaged in war or maltreated in prison or otherwise battered by racism without calling in the police.

So Lackawanna Blues left me feeling nostalgic but also protective of its characters, be they the malaprop-spewing old guy who complains of  “roaches of the liver” or the hot-tempered boxer who knocks out the teeth of his wife. These are people who can so easily be reduced to stereotypes and I winced a little as the white audience members seated around me laughed at the words of the old guy and shook their heads at the behavior of the boxer.

This creates a dilemma for me.  I want to urge everyone to see the show, which has just been extended through Nov. 12, because it’s a good one.  And I also want to encourage them to enjoy it because it’s an entertaining show.

But if you do go, I hope you will take a few minutes to think about the real people who inspired its stories because they weren’t jokes or morality tales or one-dimensional stereotypes but flesh-and-blood people who despite the odds against them came together, supported one another and helped produce the likes of Ruben Santiago-Hudson and me. 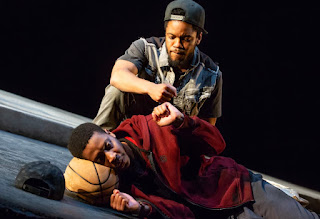 I went to see a show this week.  There was a time when that wouldn’t have been a remarkable statement. I routinely saw 150 shows a year and shared my thoughts about many of them here. But, of course, that was in the before time: before the global Covid pandemic struck, before it killed some 700,000 people in this country and a total of 4.5 million around the world, before the threat of even more infections, hospitalizations and deaths shut down theaters everywhere.

My husband K and I have social distanced aggressively during the past 19 months, venturing out only for occasional grocery trips and for two memorial services, neither of the deaths caused by the virus. We stayed cautious even last spring when we got vaccinated and at the beginning of this past summer when it looked as though the worst might be behind us and some live performances began popping up. My theatergoing buddy Bill and I even tried one of those outdoor productions. But then, the more insidious delta variant arrived and I scurried back into hibernation, where I tried to scratch my theater itch with productions streamed online.

But over the past month, a dozen shows have opened in Broadway theaters, including such warhorses as Wicked and The Lion King and newbies like Six, which had been scheduled to open March 12, 2020, the night the pandemic forced the lights to go out on Broadway. There have been openings at smaller theaters around the city too. And more are scheduled for the rest of the year.

There have been some setbacks. Aladdin had to close down for 10 days after the virus insinuated its way through that company. But rigorous testing of cast and crew members, along with additional safety protocols have kept other shows going (click here to read about some of those measures).

Meanwhile producers and theater owners have tried to woo theatergoers back with such anti-virus protections as limiting entry only to those who show proof of vaccination or negative results from recent testing, insisting on the wearing of masks throughout performances and, in some cases, installing high-powered air purification systems.

Many of my friends jumped at the chance to return. They reported back about tearing up as they walked back into theaters for the first time, cheering the pre-show announcements and joining extended standing ovations.  Finally, nervously, I’ve joined them.

I went to see Pass Over, before its short seven-week run at the August Wilson Theatre closes this weekend. It's one of the many works by black playwrights scheduled for this fall season, an acknowledgment of the racial reckoning in the theater community and elsewhere in the aftermath of the murder of George Floyd.

Antoinette Chinonye Nwandu’s response to the massacre of black men by white law enforcement officials across the country is also an audacious riff on Waiting for Godot. She sets her play on an urban street corner, populated by a single street lamp and two young black men named Kitch and Moses who, like Vladimir and Estragon in Samuel Beckett’s original, dream of getting off the block but are unable to figure out how to do it.

Two white characters show up.  One is a seeming do-gooder, dressed in a white suit and eager to share his lunch with Kitch and Moses. The other is a cop, wearing reflector sunglasses and carrying a billy club, who’s determined to humiliate them. The fact that the white men are played by the same actor underscores Nwandu’s message of white duplicity.

At moments during the play, Moses and Kitch are literally paralyzed with fear of what the cops, or po-pos as they call them, can do to black men like them. And yet, like Godot, Pass Over manages to balance both humor and despair.

I’d seen the show when it played at LCT3 in 2018 and I was knocked out by it. The excellent cast here remains the same as then with John Michael Hill as Moses, Namir Smallwood as Kitch (although understudy Julian Robertson performed at my matinee) and Gabriel Ebert as the white characters.

I missed the powerful ending that dared the audience, particularly the white audience, to confront how deeply systemic racism is ingrained in this country. But an earlier Chicago production with that devastating conclusion was preserved on film by Spike Lee and you can find it on Amazon Prime (click here to watch it).

I know from recent experience, that streaming isn’t the best way to watch theater but like many theater lovers I remain wary of being in crowded indoor spaces (click here for some other views of that.) So I haven’t yet decided if I’m really ready to give up online viewing and return to live theater full-time.  As they say on TV, stay tuned.