"Asuncion" Offers Too Many Glib Assumptions 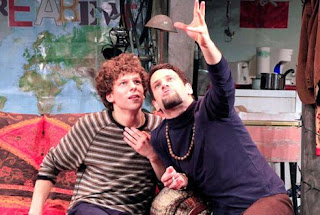 Maybe I’m the wrong demographic for Asuncion, the new play by Jesse Eisenberg that just opened in a Rattlestick Playwrights Theater production at the venerable Cherry Lane Theatre.  Or maybe even people born after 1980 will find this show as tiresome as I did. The 28-year old star of the movie “The Social Network” is a smart and oddly charming guy and he’s emerged as an avatar for the geek-chic that defines his generation but the plot of his play is sheer nonsense.
Vinny, a cool white guy who’s working on a Ph.D. in Black Studies, is letting Edgar, a totally uncool white guy with delusions of being a modern-day muckraker, crash in his grungy apartment. Their Oscar-Felix domesticity is interrupted when Edgar’s wealthy older brother shows up with his new bride, a beautiful young Filipina named Asuncion, and asks the guys to let her stay with them for a few days.
Predictably, Asuncion’s presence upends the bromance between Edgar and Vinny. Edgar imagines that she’s a prostitute or a mail-order bride purchased by his brother and in need of being rescued. Vinny thinks she’s just a fun chick to flirt with. At one point, the three of them suddenly decide to drop acid, which, of course, causes them to reveal their true selves.
Oh please. As if a rich guy would want his wife to stay in a dump with two horny and hygienically-challenged dudes. As if any woman would agree to doing that. As if there’s no other way to reveal character than to insert a dope scene so people can just spill out their feelings.
Eisenberg clearly wants to say profound things about male bonding, cultural myopia and political correctness. But his observations are all shallow: liberals can be condescending about race, people from different cultures can misunderstand one another, homosexual tensions can exist in male friendships.
Director Kip Fagan, who inexplicably gets the second bio in the Playbill, has clearly worked hard to keep the action popping.  And the design team has done its part too.  John McDermott’s set is so spot-on that its squalor made me itchy. But the play’s true saving grace is Justin Bartha’s performance as Vinny.
Bartha is probably best known for his role in “The Hangover” movies but in the past year, he has been building up a nice and varied body of theater work with appearances  in the recent revival of Ken Ludwig’s Lend Me a Tenor, where  he held his own against such heavyweights as Anthony LaPaglia and Tony Shalhoub, and in All New People by Zach Braff (yet another Hollywood actor moonlighting as a playwright) and he brings a lovely laidback charm to Vinny (click here to read a Q&A with Bartha).
I get why producers want movie and TV stars to appear in their plays and now increasingly to write them. Those names draw attention. Eisenberg, who not only wrote Asuncion but plays Edgar, got to go on Letterman to hawk his play, which isn’t the usual stomping ground for young playwrights (click here to see a clip).
And, of course, when the Hollywood names are young ones and have been attached to hits like “The Social Network,” they also tend to draw young audiences that can be so difficult to get into the theater. The audience at the Asuncion performance I attended was filled with twentysomethings clearly excited about seeing Eisenberg and Bartha in the flesh.
So, as I said, I get it.  And I want to get more young people into theater seats too.  But there’s a difference between bringing movie stars into act in a play and producing the plays they wrote. Some shows simply won’t get done without a name star and so that celebrity’s presence can mean jobs for other actors, even if not in the choicest roles. But when a theater company does the work of a celebrity playwright that means some other playwright—perhaps a talented young one whose work might even appeal to a broad demographic—is out of a job.

What a disappointment, for all the reasons you mentioned. Asuncion is a very slight play with some good bits of dialogue. I was mostly excited about seeing Jesse Eisenberg onstage and his performance just struck me as a bit over the top.

But you're right about the play attracting younger theatergoers. I have to mention one thing that made me smile - just before it started a young woman came in carrying a skateboard, took a seat at the end of the first row and propped it up against the wall. You probably don't see that on Broadway too often!