"Relatively Speaking" Has Nothing New to Say 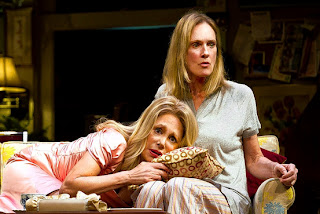 Lots of people seem almost angry that they don’t like Relatively Speaking, the trio of one-act comedies now playing at the Brooks Atkinson Theatre. It averaged a
D+ on StageGrade, which aggregates the reviews of the top New York critics. Six of the 22 scored it an F.  “Relatively disgusting,” declared one.

I suspect the umbrage is a reflection of the high expectations that everyone had for the show. For its authors are the comic heavyweights Ethan Coen, Elaine May and Woody Allen. (Click here to see a photo piece Vanity Fair did on them before previews started).
Those names, in turn, attracted a bunch of actors who specialize in belly laughs, including Steve Guttenberg, Mark Linn-Baker, Marlo Thomas and Julie Kavner, the voice of Marge Simpson on the long-running TV show. So the prospects seemed high for a really fun evening and people got really pissed when it turned out to be something less.
I’d been dubious all along (it seemed too many cooks in the kitchen for me) and so I’m not as put out as some of the critics.  But I can’t say that I enjoyed myself much more than the others did.
As the title vaguely suggests, the theme of this theatrical triptych is the way that families can drive one another crazy. Coen interprets this literally in the first play, Talking Cure, which opens in a mental hospital where a menacing patient is bullying his meek therapist; a movie-style flashback shows us how the patient’s parents made him the way he is.
The actor originally cast to play the father in that scene left the show during previews.  "We kind of weren't together on the character,” he told The New York Times. “There were things Ethan wanted that I didn’t like, that seemed to take the character in a direction that felt artificial. Stuff I couldn’t really make sense of.” (Click here to read the entire piece.)
I know what he means. The only good thing I can say about Talking Cure is that I’m glad I saw it before buying a ticket to the all-Coen bill of one acts that is scheduled to open at the Atlantic Theater in December.
Meanwhile, Allen has been riding a wave of goodwill since his latest movie “Midnight in Paris” opened in June.  But his contribution Honeymoon Hotel could cause people to feel about him the way they did in the ‘90s when he dumped his longtime love Mia Farrow for her adopted daughter Soon-Yi Previn. Allen may even have written Honeymoon Hotel back then because it has several stale jokes about Lorena Bobbitt who infamously bobbed her husband’s penis in 1993.
The family tie in his short play is between a May-December couple who flee a wedding and escape to a tacky motel, where they’re eventually followed by the entire bridal party, including the rabbi.  A shrink shows up too. So Allen gets to make hoary jokes on all his favorite tropes—religion, psychology, sex and younger women besotted with much older men. There are a few chuckles but they were fresher and funnier years ago.
May’s George is Dead, which is sandwiched between the other two, comes off best. That's largely because Thomas gives a fully-realized and affecting performance as a narcissistic socialite who has no one to turn to when her husband dies in a freak accident and so seeks comfort from the daughter of her old nanny. (Click here to read an interview with Thomas.)
But all three plays hearken back, in one way or another, to the time when Borscht Belt comics got big laughs by portraying Jewish women as nagging mothers, whiny wives and selfish young twits. Neil Simon refined the genre and made a mint off it in the ‘60s, ‘70s and ‘80s.  Most of us have moved on.
Except it seems Allen, Coen and May. They bare the bulk of the blame for this dispiriting return to those times.  But they aren’t helped by director John Turturro, who exhibits as deft a touch for comedy as Lady Gaga does for sober attire.
Turturro, an idiosyncratic but fine actor, should keep his day job. And even he seems to realize that he may have bit off more than he could chew by trying to direct the work of not one but three people who are comedy directors themselves.  (Click here to listen to an NPR interview he did.)
Still, people around me laughed a lot.  So maybe we haven’t made as much progress as I thought.  Or maybe we're just desperate for the chance to laugh at anything in these difficult times.

Well I can't speak for the critics but my own anger comes from having paid $127 for my ticket!

To call Ethan Coen's contribution "a play" would be generous. I'm pretty sure it's the worst thing I've sat through in my relatively brief theatergoing career.

I've been a Woody Allen fan ever since I was a teenager and Annie Hall is one of my all-time favorite movies. But Honeymoon Hotel just seemed like something he had in a drawer for awhile. It was almost a parody of Woody Allen. And not in a good way.

I did like George is Dead. It was a thrill to see Marlo Thomas and I thought Lisa Emery was really strong. I'm not all that familiar with Elaine May but it seemed like she wrote a play instead of an extended sketch.

Honestly, I wonder whether some of the laughter came from people thinking: "These are comedies, right? They're supposed to be funny? We're supposed to laugh?"

It just makes me sad when I think of all the deserving playwrights who could have written genuinely good one-act plays but don't have the name recognition.