"Who's Afraid of Virginia Woolf?" is Still Great 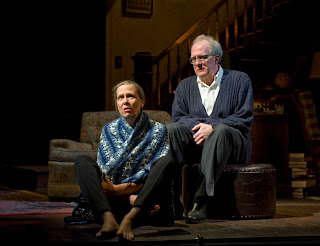 Just about everyone who has seen it is saying that the new revival of Who’s Afraid of Virginia Woolf? is not to be missed.  And they’re right.

This latest version of Edward Albee’s masterwork opened at the Booth Theatre  on Oct. 13, 50 years to the day that the original opened at the old Billy Rose Theater (now the Nederlander and home to Newsies). But there is nothing dated about Albee’s gimlet-eyed look at the desperate games unhappy people can play to keep themselves going.

Albee had been a success in the downtown theater scene but Who’s Afraid of Virginia Woolf? was his Broadway debut. His chronicle of a night in which two college professors and their wives drink oceans of alcohol, flirt with adultery and reveal the secrets that have kept their unhappy marriages together gob smacked the uptown crowd.

The New York Times declared that it “towers over the common run of contemporary plays.” But there were dissenters too.  “If Edward Albee is the white hope of the American theater, then our nation is in need of a strong detergent,” huffed one letter to the paper’s editor.

The play was a finalist for the Pulitzer Prize for Drama but the board was apparently as prudish as the letter writer and awarded no prize that year. But the theater community knew what it had been given. Who’s Afraid of Virginia Woolf? took home four big Tonys for direction, best actor and best actress for Arthur Hill and Uta Hagen as the battling older couple George and Martha, and, of course, best play.

Four years later, Mike Nichols directed a movie version that starred Richard Burton and Elizabeth Taylor, who won her second Oscar for her performance as the bitterly frustrated Martha. I was in my teens then but my mother took me to see it and while I won’t pretend that I understood everything I was seeing, I do remember being transfixed.

Director Pam McKinnon’s crackerjack production is the third Broadway revival.  The last, in 2005, which starred Kathleen Turner and Bill Irwin was so good that my husband K decided not to see this one because he didn’t want to taint the memory of such a great evening in the theater.

But this new production drew raves when it opened at Chicago’s Steppenwolf Theatre in 2010 and later when it moved to Washington. So I decided to risk it and I had little trouble persuading my theatergoing buddy Bill to see it with me.

And we were so glad we went. The play runs 3 hours and 15 minutes with two intermissions but the time flew by.

That’s in part because Albee’s play is often throw-you-head-back-and- laugh funny. But it’s also because McKinnon and her outstanding cast found new ways to unleash its devastating pain as well.

Amy Morton, best known as the oldest daughter in August: Osage County, makes Martha less of a gorgon than others have.  Bill said he missed that harpyish streak in the character but Morton’s human-sized Martha seemed more like the college president’s daughter that Martha is—and more vulnerable. This Martha touched me in a way that others—even very good ones like Turner’s—didn’t.  (Click here to read an interview with Morton.)

Tracy Letts, who wrote August: Osage Country confirms how theatrically ambidextrous he is because, while, just as you'd expect one playwright to treat the work of another, he is totally faithful to the text, he's also managed to subtlety reimagine George.

The wounds that Letts' George has suffered over the years throb right beneath the surface but over them he has grown a blister that numbs the pain just enough so that he's able to push ruthlessly ahead.  (Click here to read an interview with Letts.)

I also have to give a shout-out to Carrie Coon, who plays Honey, the puerile wife in the younger couple, and who may be the best onstage drunk I’ve ever seen. But everything about this production—Todd Rosenthal’s set, Nan Dibula-Jenkins’ costumes, Aileen Lee Hughes’ lighting and, of course, McKinnon's deft direction—works, the pieces adding up to a magnificent whole.

There was silence for the first few seconds after the performance that Bill and I saw ended as those of us in the audience (dotted with celebrities including Stephen Sondheim and the movie actor Bradley Cooper, as I said, everyone who loves theater is trying to see this) pulled ourselves together and then erupted into applause, including opera-house bravos.

After the show, Bill and I walked through Shubert Alley for a late dinner at Sardi’s.  As we were leaving the restaurant, I spotted my old friend the veteran publicist Irene Gandy having dinner with McKinnon.  I went over and when Irene introduced me, I put my palms together in a gesture of thanks and bowed. “I’ve been hungry for a nourishing evening in the theater,” I told McKinnon.  “Thank you so much for giving it to me.”

And now here's what I want to tell you: go see it and be fulfilled too.

Labels: Who's Afraid of Virginia Woolf