The Special Effects of "Frost/Nixon" 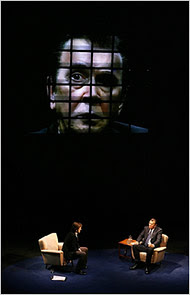 When you think of special effects you usually think of movies like “Spider-Man” and “Pirates of the Caribbean”. But Broadway has been experimenting with special effects too. Leading the way these past few seasons have been the video artists who work alongside set designers to bring new kinds of visual images to the stage, from the poignant memory book photo of a once happy family in The Year of Magical Thinking to the amusing simulation of a crowd doing the wave at a tennis match in Deuce.

The Brits have been particularly enterprising with this new imagery. The first time I really noticed how projections could transform the Broadway experience was two years ago when my artist friend Lesley and I saw Andrew Lloyd Webber's The Woman in White. The critics weren't crazy about William Dudley’s computer-animated projections and strategically placed screens, which, replacing conventional sets, transported the audience through Victorian-era train tunnels and into the rooms and passageways of ghost-ridden mansions. But I found myself entranced. Maybe too much so since I actually enjoyed those virtual “sets” more than I did the rest of the show. Lesley, who enjoys teasing the boundaries of people’s expectations with her paintings, sculptures and installations and who was once married to a set designer, was also intrigued by the artistic possibilities of this high tech toolbox. We both thought that it might be a way to attract a younger generation of theatergoers who are accustomed not to the static three-camera TV sitcoms of their parents’ youths but to the kinetic energy of video games and streaming computer images. The next season, I loved it when The History Boys incorporated video into its highly theatrical production. Still, the most effective special effect I've seen is in the current production of Frost/Nixon.

I first saw the show a month ago with my friend Ann but I went back this past weekend with my husband K. The show, of course, details the behind-the-scenes drama leading up to the famous interviews in which TV journalist David Frost got Richard Nixon to apologize for his role in the Watergate cover up that brought down his presidency. Frank Langella, the deserved front runner for the Best Actor Tony, doesn't need any special effects to convey the complexities and subtleties of Nixon. But the large freeze-frame close-up his face as his Nixon finally accepts the hell to which his hubris has brought him illuminates the exquisite tragedy Langella creates at each performance. Film director Ron Howard and his producing partner Brian Grazer have bought the movie rights to the play and there was much speculation that they would hire a big name star to play Nixon. They have smartly given the role to Langella. That close-up may have helped clinch the deal. But their decision also proves that even in Hollywood, there's an appreciation for the old-fashion special effect of an actor at the top of his game.

Like you, I've been riveted by the video and projection design incorporated into Frost/Nixon and other Broadway fare.

One of the most stunning uses of video projection I've seen was in the revival of Assassins that showed the Zapruder film on Lee Harvey Oswald's (Neil Patrick Harris) white T-shirt.

While I haven't yet seen it, I understand that the upcoming revival of Sunday In The Park With George features a breathtaking projection design that enthralled its audience in London. I can't wait to see it.