"Queen of the Mist" Has Moments of Greatness 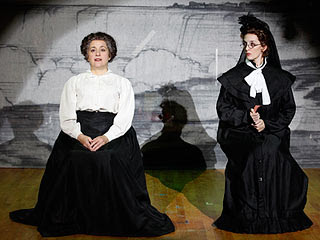 No matter how talented they are, ample-bodied and strong-featured actresses like Mary Testa usually play the funny best friend or the sassy sidekick instead of the leading lady.  And so I can imagine how wonderful it must be for Testa, who is very talented indeed, to have the chance to be the star in Queen of the Mist, the new Michael John LaChiusa musical that the Transport Group Theatre Company just opened at The Gym at Judson Memorial Church.

LaChiusa, who does both the book and music for all his shows, loves to write big, complex pieces about strong, complicated women and he’s come up with a doozy this time. His subject is Annie Edson Taylor, who, at the age of 63, became the first person to survive going over Niagara Falls in a barrel.
It’s a quirky tale but its swirling mixture of obsession, fame and a Greek-like fall from grace is right up LaChiusa’s alley (among my favorite of his shows is Marie Christine, his reworking of Medea). So I can imagine how wonderful it must be for him to see Testa throw everything she has into the role.
It will come as no surprise to regular theatergoers that Testa limns the considerable humor in the play with just a pause between words or the rise of an eyebrow.  But she’s just as adept at portraying the desperate yearning to be more than ordinary that pushes Annie to undertake her dramatic act.
“There is Greatness in Me,” Annie sings repeatedly through the show. Testa is in marvelous voice and the song becomes an anthem for the foolishness and indomitability that allows all artists to take the plunge.
Critics run very hot or very cold on LaChiusa but his music almost always makes me swoon and that’s totally the case with this production. (In the interest of full disclosure, I should say that LaChiusa and my husband have worked together and so I’ve met Michael John several times.)
Edson took her leap in 1901 and LaChiusa’s score evokes all the sounds of the turn of the 20th century from Victor Herbertish ballads to Scott Joplinesque rags (click here for a YouTube preview of the score).  The songs in Queen of the Mist are accessible and catchy. I overheard my theatergoing buddy Bill humming some of the tunes as we left the theater.
The lyrics aren’t always as clever as they might be (LaChiusa joins the growing number of songwriters who can’t seem to resist the gratuitous shock value of the c-word) but the lovely melodies have been gorgeously orchestrated by Michael Starobin and they’re well played by a tight six-piece band.
The show has been beautifully directed too. The space at Judson is literally a gym, with bleachers on both long sides of the playing space but Jack Cummings III makes smart use of it and the narrowness of the space does double duty as a metaphor for both the confined space in which Annie realized her triumph and the constraints that society placed on women at the time.
LaChiusa places Annie’s ascent to celebrity in the first act and her descent into ignominy in the second, which drags a bit. But the seven-member cast is game throughout. Aside from Testa and Andrew Samonsky, who turns in a nimble performance as Annie’s shady manager (click here to read an interview with him) the actors all play multiple roles. The women shine.
Theresa McCarthy shares a lovely duet with Testa as Annie’s sister and Julia Murney delighted the audience at the performance Bill and I attended as the hatchet-wielding temperance advocate Carrie Nation who snootily condescends towards Annie when they share the bill on the Chautauqua lecture circuit.
But, in the end, it is Testa’s show and there are truly moments of greatness in her—and in it.

Labels: Queen of the Mist