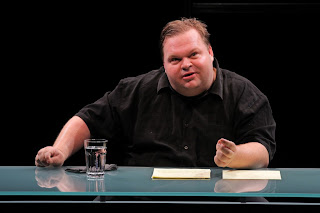 Cynics have long said that dying young can be a career boost in show business.  But I doubt that even the most sardonic of them meant that the good fortune would redound on someone other than the deceased. That, however, is what has happened for Mike Daisey, whose latest show The Agony and the Ecstasy of Steve Jobs opened at the Public Theater just two weeks after Apple’s founder succumbed to pancreatic cancer at the relatively young age of 56.
Daisey has long been a downtown darling. (“I feel like I’m crashing a party for the self-designated hip,” my theatergoing buddy Bill said as a hipster couple in tight jeans and leather jackets settled into the seats in front of us.)  But it’s unlikely this show would have gotten the attention it has if Jobs hadn’t died. And I feel kind of ambivalent about that.
I met and even once lunched with Jobs back in the late ‘90s. Like most people, I came away somewhat dazzled by his charisma. As he did with numerous journalists, he and I exchanged a few emails and phone calls over the years. The last one I remember was a brief call soon after he’d returned to work following the surgery that we now know he put off too long. I gingerly asked about his health, he briskly brushed it off and then we got down to business talk.
You couldn’t even remotely call us friends and yet I felt shaken when I heard that Jobs had died. I also found myself feeling uneasy about the play, whose previews were scheduled to start the following week.
And I clearly wasn’t the only one thinking that way. For Daisey, who both created and performs his one-man critique of Job’s life and career, wrote an op-ed piece for the New York Times defending the decision that the show would go on (click here to read what he wrote).
Ironically, it was Daisey, and not Jobs, who had originally drawn me to seeing The Agony and the Ecstasy of Steve Jobs. In recent years, Daisey has developed a following as a monologist in the Spalding Gray tradition. Like Gray, he sits alone on a stage behind a table and simply talks to his audiences for a couple of hours. And, as they did for Gray, people raved.
Since I’m not a big fan of one-man shows, I had missed Daisey’s earlier efforts but I stumbled across an essay he wrote about the regional theater movement and its trenchant analysis and unbridled anger so blew me away (click here to read it) that I promised myself I’d see him perform the next time he did anything in town.
What he’s now doing is a rumination on the human cost of our preoccupation with the latest  technology. Daisey, a self-described Apple fan-boy, alternates between a bio of Jobs and an account of his own trip to Shenzhen, the Chinese city where hundreds of thousands of workers labor under harsh conditions to create the products we all so crave.
Daisey, a short Buddha-shaped man dressed all in black, is an engaging storyteller—he’s got presence and he knows how to use his voice. And he’s often very funny, although he relies far too much on profanity to get laughs but, alas, that’s often what passes for wit nowadays.
The show’s technical values are intentionally minimal. Rock music blares before it begins.  Light strips turn on and off behind Daisey, sometimes to mark the end of a chapter in his story, but at other times, without apparent cause. The show clearly prizes content over style.
The content is intentionally unsettling. Daisey talks about child workers whose 12 to 16 hour workdays doing repetitive tasks on assembly lines leave them physically deformed. About the near-slave wages they are paid. And about the ways in which efforts to help them have too often backfired.
Life in Shenzhen is such hell that one factory there has draped itself with nets to cut down on suicides by workers who had begun flinging themselves off its roof. The moral of Daisey's tale seems to be that Jobs should have found a better way to get his jobs done.
It’s all so distressing that I began to wonder if I should even power up my iPhone after the show.  But despite the praise the show’s received (click here to read the StageGrade raves) Daisey’s revelations aren’t truly that revelatory since they've been published elsewhere and even Jobs has acknowledged that he made hard-hearted business decisions.
Like Michael Moore, another professional cranky man, Daisey falls in love with his own self-righteousness and can’t get enough of it. So his harangue goes on too long.  But so has this review.  And so I’ll stop.

Labels: The Agony and the Ecstasy of Steve Jobs

First of all, I definitely agree about the profanity. I can't believe he talks that way in his everyday speech. Who does? It seemed like a ploy to get a cheap laugh. And profanity is no substitute for good writing, which unfortunately a lot of writers have forgotten.

This was my first one-person show (except for Thurgood) and I was taken by the storytelling. It's the most basic form there is, just listening to someone talk for two hours. I was absorbed.

But like you said, there's really nothing new. Also, I felt uneasy at this mixture of reportage and theatre. I mean, I found it hard to believe that the workers would feel so free to talk to him and I wondered whether he might have embellished anything.

But it was an interesting experience that forces you to think about the human dimension involved in all of our gadgets. It's designed to directly challenge and provoke in a way that a lot of theatre isn't.

Unfortunately, I think in the West we've pretty much stopped caring about who makes the things we buy and about how China treats its citizens.

Hi Esther. Thanks for leaving a comment. I don't really mind mixing reportage and theater. In fact, I like seeing the two mix it up together. I think I'm more disappointed in the fact that the end result of Daisey's anger is the little sheet handed out after the show that tells people to tell other people about what goes on in Shenzhen.

I suppose that's a start but in the old days when something pissed us off, we took direct action—like boycotting grapes picked by exploited farm workers and refusing to visit apartheid South Africa.

Thinking about the people of Shenzhen (and even seeing a play about them) may make us feel better but I'm not sure that it does much for them if we just think about them and then keep on using the stuff they make.