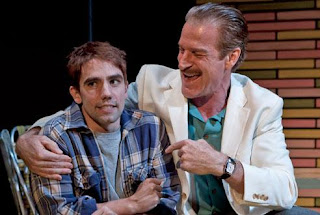 Playwrights usually write memory plays at the beginning of their careers, as Tennessee Williams did with The Glass Menagerie and Dylan Thomas with Under Milk Wood. But Lanford Wilson already had seven plays, two of them hits, under his belt when he wrote Lemon Sky, the autobiographical piece about a painful period he spent with his estranged father that the Keen Company is giving a somewhat pallid revival at Theater Row's Clurman Theater.
Now I should say that mine is a minority opinion.  Most reviews have praised this production and it’s scored an A- on StageGrade, which aggregates the reviews of the top New York critics. But I can’t help thinking that the high marks actually reflect the way people feel about Wilson, who died in March and was not only a founding father of what we now call the indie theater movement and the author of such plays as Burn This, Fifth of July, Hot l Baltimore and the Pulitzer Award-winning Talley’s Folly but, by all accounts, was also a real mensch (click here to read the opening chapter in a series of pieces on Wilson that my fellow blogger Parabasis has put together).
Lemon Sky opens when Wilson’s alter-ego Alan, a young man who’s grown up in the Midwest, has just arrived in California to attend college and to live with the father he’s seen only a few times since his parents broke up when he was a small boy. The dad is now remarried to a Leave-It-to-Beaver-style mom, has two younger sons and is also serving as foster father to two troubled teen girls. Both father and son want to make up for lost time but, as Alan tells the audience at the start of the play, both will be painfully disappointed.
Because Lemon Sky is a memory play, the onstage action is divided between the 1950s when the main events happened and 20 years later when they are being remembered. Scenes and fragments of scenes float in and out and are sometimes replayed from different perspectives.

Wilson wasn't really known as a master of the well-plotted play but he was a wonderful wordsmith and there are enough lovely moments in Lemon Sky that I found myself wishing I could time-travel back to the original production in 1970, which starred a young Christopher Walken as Alan and Charles Durning as his dad.
The Keen production's Alan is played by Keith Nobbs, a boyishly appealing actor who had a similar narratorish role in last season’s Lombardi. Kevin Kilner, who seems to have done most of his stage work in regional theater, brings an intense, if one-note, fierceness to the dad.

All seven members of the cast do everything they are supposed to do but neither they nor their director Jonathan Silverstein seem able to do anything that goes beyond the expected. What should soar remains earthbound and the result, at least for my husband K and me, was an unmemorable night in the theater.

I've never heard of Lemon Sky but It sounds interesting. Good job on the review, do you know where I can see a production of this show?

Melodicrose, thanks for leaving a comment and for the kind words in it. The show is playing on Theater Row and you can buy a ticket here:
http://keencompany.org/tickets/index.shtml
Would love to know what you think of it if you go.