Autumn, The Algonquin and Other Reveries 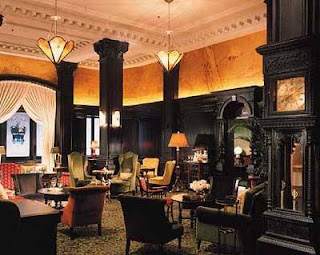 Not much seen this week—at least not that I can yet write about since I try to keep the opening night embargo that shows ask reviewers to observe.  Besides, it’s promising to be a beautiful fall weekend and so I’m going to go out and revel in it.  But before I do, I want to give a little shout-out to the Hotel Algonquin.
My husband K and I went there last night after seeing one of those shows about which I’ll be telling you later and it reminded me of how much I love the place. The Gonk, as my friends and I affectionately call it, is the home of the legendary Algonquin Round Table, where reporters, writers and the theater folk they hung around with gathered for lunch every day during the 1920s. And the hotel has celebrated artists ever since, at various times, offering discounted meals and even free rooms to some.
Wanting to be a part of those stories made the Algonquin one of the first “grown-up” places that I regularly frequented after graduating from college. The lounge area is decorated like a cozy sitting-room, filled with couches and wing chairs. The lighting is gentle so everyone looks great. There’s often a cat ambling around the room to make it feel even more homey. The drinks are expensive but they’re big and they’re good and the staff will let you linger over one as long as you like. Which, I'm happy to say, I’ve done more times than I can count.
Sitting there has been a before and after theater tradition for decades and it’s always been perfectly acceptable to lean over and strike up a conversation with the folks in a nearby sitting group about the show they’d just seen. But last night—K and I were there from 10 p.m. until almost midnight—the place was half-empty.  Which worries me.
The hotel has been declared a landmark but they’ve fiddled with the sitting-room before and, if people stop going, they might again—and maybe this time permanently.  That would be a loss, not just for me and my buddies but for anyone who has a sense of the theatrical.  So go.