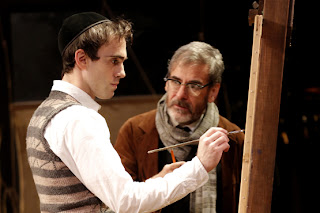 Passover begins on Monday evening and although My Name is Asher Lev opened four months ago and has extended its run at the Westside Theatre through
Sept. 1, it’s hard to think of a better time to talk about this show, which both challenges and celebrates what it means to be a Jew.

I’ve never read the Chaim Potok novel from which Aaron Posner has adapted his play but male Jewish friends who were, like the title character, artistic or otherwise sensitive boys tell me that the book helped them get through their youths, making them believe, sometimes against great odds, that they could become the men they dreamed they might be.

In both the book and this play, Asher Lev is a boy prodigy growing up in Brooklyn who becomes obsessed with making art at an early age. This brings him into conflict with his father Aryeh, a devout Hasidic who is equally obsessed with his work setting up yeshivas and preserving Jewish life in Europe in the difficult years after the Holocaust.

Asher’s mother Rivkeh supports their son’s artistic ambitions but when the leader of their sect gives his approval and introduces the boy to a famous but non-observant artist named Jacob Kahn, Asher begins controversial work that takes him further into a world alien to that of his parent’s.


Posner and his director Gordon Edelstein have decided to tell Asher’s story with just three actors—Ari Brand plays Asher from boyhood to young manhood; Mark Nelson plays Aryeh, Jacob Kahn and several other male characters as well; and when my husband K and I saw the show Jenny Bacon played all the women in Asher’s life, including Rivkeh. Ilana Levine now plays those roles (click here to read about her).

I usually hate it when actors double in roles because it can be so hard to keep the characters straight. But it works beautifully in this production. That’s a testament to Edelstein’s lucid direction, (click here to read about his approach to the show) James F. Ingall’s trully illuminatin lighting and a pitch-perfect cast.

Brand only has the one character to play but he carefully delineates Asher’s evolving sense of himself over the years. And while I also usually hate having adults pretend to be children, Brand burrows so deep into the role that he even manages to be convincing as the six-year-old Asher. (Click here to read a Q&A with him).

Nelson is not a subtle actor but he uses his innate extravagance to good effect and grounds every line and gesture in such emotional truth that I could tell which character he was playing before he said a word.

But the real standout was Bacon, who seemed to physically transform herself right before one’s eyes as she moved from one character to the next. Her Rivkeh was the emotional heart of the play.

Another shout-out has to go the master set designer Eugene Lee, who has made a simple but exquisite set that is both specific and versatile, believable as both the Lev family’s home and Jacob Kahn’s studio.

There are some missteps. Posner tries to pack in too much of the 369-page book—scenes with Asher’s uncle fill in some backstory but don’t seem necessary in a 90-minute play.  And at least half the play is delivered in direct address to the audience, as was the entire book. And yet, My Name is Asher Lev is still a richly theatrical experience.

Like the religion at its center, My Name is Asher Lev proudly adheres to the traditions of its form.  It is an old-fashioned play that deals unironically with the big issues like the obligations of faith, the bonds of family love, and the power of art. And like Passover, it is a celebration of liberation.  But, to paraphrase a famous ad from my own youth, “You don’t have to be Jewish to love it.”

Labels: My Name is Asher Lev