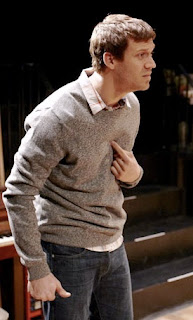 Several small off-Broadway shows have come and gone over the past few months while I’ve been preoccupied with all the Broadway openings at the end of the season, the deserved hoopla leading up to and coming out of the Tonys, and putting together perennial posts like my Summer Reading list and July 4th greetings. Luckily, one show that’s stuck around, Tribes, is one of the best of the year.

Tickets for Tribes are currently on sale at the Barrow Street Theatre through Sept. 2, which gives me a chance to talk a bit about the show but, more importantly, also gives those of you who haven’t already done so, the chance to see it. Which you should do.  Right away.

The young British playwright Nina Raine (this is only her second produced play) tells the very specific story of an intellectual couple—she’s an author, he’s an academic—and their three grown children but, like all the best writers, Raine also speaks to universal truths about the ways in which we define ourselves. Her play is, in other words, about how we determine to which tribes we belong.

The plot centers around Billy, the youngest in the family, who is also the most even-keeled of the siblings and the one to whom all the others cling.  But because Billy is deaf, he is also something of an outsider among them, unable to follow all the quarrels and quips (although it poses serious questions, the play is often quite funny) of his voluble kin.

Yet Billy is also an outsider in the deaf community because his parents refused to teach him sign language. He gets along by reading lips. But everything changes when Billy meets Sylvia, the hearing daughter of deaf parents who, now in her 20s, is losing her own ability to hear.  For while the family members want Billy to be happy because they love him, what they want even more is for him to continue making them happy.

Things don’t quite work out as we think they will and that is another thing that I like about this thought-provoking and thoroughly engaging play.  I also liked everyone in its pitch-perfect, six-member cast.

First among equals was Jeff Perry, wickedly good as the un-passively aggressive dad. The  thing I most regret about taking so long to write about the show is that Perry, a co-founder of Chicago’s Steppenwolf Theater Company (his co-founder Gary Sinise sat across from me at the performance I attended) left the show last week so that he can get back to work as a regular on the TV series “Scandal."

But the others still there are fierce too.  Especially fine is Russell Harvard, a partially deaf actor who borrows from his own experiences to enrich his portrayal of Billy (click here to read an interview with him) but elevates his performance with the force of sheer talent. It’s tough for actors with disabilities to find parts (just ask Phyllis Frelich, who has only appeared in three New York productions since her Tony-winning performance in 1980's Children of a Lesser God) but I’d love to see Harvard in other shows.

Meanwhile, Susan Pourfar has deservedly won kudos for her nuanced portrayal of Sylvia’s struggles as she moves from the tribe of the abled to that of the disabled (click here to read a Q&A with her). Mare Winningham is, of course, always terrific, which she is again here as Billy's overly protective mother.  And I might as well just go ahead and name Will Brill and Gayle Rankin because they too are excellent as Billy’s emotionally handicapped siblings.

The production is directed by the energetic David Cromer (he even managed to turn up in the opening scene of HBO's "The Newsroom.") His wonderfully revelatory production of Our Town played at Barrow Street a couple of seasons ago and he works his magic here too.

Cromer has staged the play in the round, which lends a kind of eavesdropping intimacy to the goings on, with the action sometimes spilling right into the audience. Some of what’s being said can be missed when the characters are facing in certain directions but that seems in keeping with the frustration that Billy so often suffers.

All of the design is similarly integrated into the action. The knowingly shabby set and costumes by Scott Pask and Tristan Raines  speak volumes about the people who live in them. When Billy learns to sign, Jeff Sugg’s elegant video projections beam the translations onto scrims around the theater.

And special recognition has to go to Daniel Kluger, whose sound design is, at just the right moments, eloquent in its depiction of what it must be like to be hard of hearing.

In short, everyone involved in this production has made this show a tribe to which anyone who loves smart theater should want to belong.