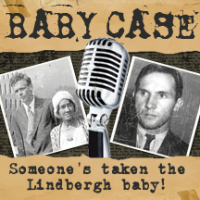 There’s a lot that's similar about Bonnie & Clyde, the Frank Wildhorn musical about the Depression-era gangsters that closed in December after just 36 performances, and Baby Case, the musical about the Lindbergh kidnapping that opened at the Pershing Square Signature Center on Monday as part of this year’s New York Musical Theatre Festival.  Maybe they have too much in common.

Both are based on real-life crime stories that made headlines in the '30s.  Both have listenable scores—not perfect scores but ones with songs built on catchy, and sometimes lovely, melodies that stick with you (click here to sample some from the new show). And both are old-fashioned book musicals.  Which I usually like. The problem is that both these books are so wobbly they undermine the resulting show.

I’ve said it before and I’ll say it again: book writing must be the hardest job in show business. A good one should tell a story that makes a point, in addition to providing good set-ups for the songs. And it’s got to be even harder to do when one guy writes the book, composes the music and crafts the lyrics, which is what Michael Ogborn has done for Baby Case.

My husband K and I attended Monday's performance of Baby Case and we sat near some people who were clearly friends of Ogborn’s and who, even before the show began, marveled to one another about how talented he is. Indeed, he does seem to be so. But it could have helped his show to have had someone else in the room when he was putting it together.

Baby Case tracks the Lindbergh story from Charles Lindbergh’s historic non-stop solo flight over the Atlantic in 1927 to the 1936 execution of Bruno Richard Hauptmann, who was convicted of kidnapping and killing the aviator’s 20-month old son. The crime remains, like those of Bonnie and Clyde, a fascinating and oft-told tale. Which poses a question for anyone who decides to tell it again: why do it?

Ogborn attempts to answer that by condemning the media circus that surrounded what was then called “the crime of the century” and by questioning whether Hauptman was really guilty.  Both are valid ideas but without having had anyone else in the room to bat them around with, Ogborn doesn’t develop either fully.

There are plenty of scenes—and a few song and dance numbers—in which reporters and photographers hound Lindbergh and his wife Anne both before and after the kidnapping. The publisher William Randolph Hearst pops up periodically to push for more sensational coverage and the columnist Walter Winchell to demonstrate some of the worst of it. But Ogborn doesn’t seem to have anything to say about all of this besides, isn’t it a shame?

Similarly, he drops hints that Hauptmann may have been framed but he doesn’t make a clear argument for why he was or who was behind it. The real problem may be that Ogborn was not only trying to do too much but to cram too much into his show.

Baby Case name checks almost everyone with any connection to the incident—a Lindbergh family maid who committed suicide, an eccentric school teacher who got involved in the ransom negotiations, a celebrity reporter who covered the case and even mobster Al Capone. The show extends their 15 minutes of fame far beyond their expiration date: does the truck driver who discovered the baby’s body really need a song?

Everyone in the hardworking cast plays multiple roles.  Even Will Reynolds who plays Lindbergh doubles as Hauptmann.  Having one actor play both those parts is an interesting conceit but again not enough is done with it to make a point. Is Ogborn saying that both men were victims of the media?  Or is he implying that Lindbergh may have been just as easily culpable as Hauptmann in the child’s death?  Inquiring minds want to know.

The 10 producers listed on the program have given Baby Case a quality production. Most of the cast members have Broadway credits, including Melissa van der Schyff, who was a standout as the sister-in-law Blanche in Bonnie & Clyde and does a fine job of singing one of this show’s most plaintive ballads.

Martin T. Lopez’s set is simple but his costumes —and there are a lot of them—nicely evoke the period. Meanwhile, K marveled at how the actors could have learned all the choreography that Warren Adams devised in what must have been a short rehearsal period for this six-show run, which ends on Sunday. And Jeremy Dobrish has directed with equal vim.

Still, I’m being so nitpicky about Baby Case because it has so much potential. Unlike so many NYMF shows, it isn’t a goofy spoof and the fact that people remember and continue to debate a crime that was committed 80 years ago underscores the potency of the story. But Ogborn has been working on Baby Case for over a decade now (it won four Barrymore Awards, including Best Musical, in his native Philadelphia back in 2002) and this may be as far as he can go with it.

Just have to say, your expressed need/want to be told exactly what the point of any given choice is, demonstrates a certain youth in your tastes. Personally, I detest when shows spell things out and beat me over the head with one side, or another. I personally believe that one of the things that makes theatre so powerful and so great, -indeed what makes ANY form of storytelling so profound- is the choice to AVOID spelling everything out. To tell a story without bias and leave the audience to decide for themselves what it all means, or what they personally believe, is exactly what every form of our media needs more of. And in the context of theatre, makes for a much more compelling, less preachy experience that actually invites the audience to use their minds, rather than let them continue to atrophy.

Thanks for your really thoughtful comment—and for the implication that I might be young. All kidding aside, I agree with you that few of us want everything spelled out in the plays we see or in any other form of art. But I think that we can expect our artists to offer a reason for presenting a work and, perhaps, a different way of looking at the things they're exploring in it. That doesn't mean that they should tell us what to think but rather that they show us what they think and feel. For me, merely presenting a scenario, which is what I think Baby Case does, is reportage. And I'm not knocking reporting because I've spent most of my life as a working journalist. But I think art has a higher mission than that. Art doesn't have to be preachy—and I hope it won't be—but I think the best of it should have something to say. But, again, thank you so much for taking the time to have this conversation with me.

Jan is the man and right about this!

I think you wanted to know too much. The play makes the obvious point that the trial was a media circus so manipulated by the press and so riddled with bad prosecution that the truth could hardly see the light of day. You seem to want to know "the truth." Ogborn's point is that we still don't know it. We will probably never know it because it has been erased by the shifting sands of time and the manipulations of sinister people. He invites you to sit back, survey the individuals involved, see how they were caught up by the powerful forces, and reach whatever conclusions you would like, knowing that you will never really know the truth. And what's wrong with that? Did you want it to end like an Agatha Christie play--with a confession of the guilty party?