"The Height of the Storm" Falls Short 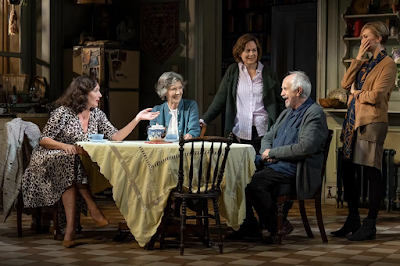 French playwright Florian Zeller tends to wield a double-edged sword. Although he only recently turned 40, Zeller writes big juicy parts for older actors. The problem is that he inevitably portrays those characters as senile as he did with The Father (which I loved) or psychotic as he did with The Mother (which I didn’t care for; click here to read my review of that one). Note to Zeller: age and mental instability are not synonymous.

His latest, The Height of the Storm, which is playing at Manhattan Theatre Club’s Friedman Theatre through Nov. 24, is a tale of age-related madness reminiscent of The Father, for which Frank Langella rightly won his fourth Tony Award.

That drama simulated the mind of a man succumbing to dementia by constantly changing the scenery around him and having multiple actors play the same characters in his life, which allowed people in the audience to viscerally share his disorientation. Piecing together the jumbled parts of his memory was an emotionally wrenching experience that deepened my empathy for people with Alzheimer’s.

This new play is disorienting too (Christopher Hampton does the English translation) but its confusions don’t pay off anywhere near as satisfyingly. The setting, beautifully designed by Anthony Ward, is an elegant old country house in which, it seems, someone has recently died and others are in mourning and struggling to figure out how to go on without that loved one.

But the relationships between the characters in The Height of the Stormare elusive and their exchanges enigmatic. Even the very existence of some of them is unnecessarily uncertain.

Zeller and director Jonathan Kent (click here to read an interview with him) clearly intend this meditation on love and loss to be a mind-twister that will make theatergoers feel smart as they sift through and deconstruct clues suggested by Hugh Vanstone’s subtle lighting and Paul Groothuis’ haunting soundscape.

But the play’s insistent inscrutability simply struck me as a gratuitous gimmick, a kind of choose-your-own-adventure story that is neither as clever nor profound as it pretends to be. I don’t need a play to spell everything out for me. But I also don't want to feel that the playwright is idly fooling around with me.

Here I felt as though Zeller had just whipped out the formula he used with The Father (even the main male character’s name, André, is the same) plugged in a few additions (among the survivors are two daughters, the fiancé of one and a mystery woman) and then crossed his fingers that it might work again.

And yet the leading performances are sublime. For actors are the superheroes of theater. The Height of the Storm may be a lumbering affair but Eileen Atkins and Jonathan Pryce hoist it onto their backs and almost make it soar.

His is the flashier role. This André is a celebrated writer now grown frail and Pryce, deftly working the spaces between the lines of dialog, captures the arrogance of a man used to being catered to, peevish over having lost so much of that power and dreading what may come next. It’s a devastating performance.

Atkins is given the thinner gruel of playing “the good wife” and so gets extra points for turning that part into such a full meal, and doing so without resorting to any histrionics.

Whether she’s peeling mushrooms or pouring a cup of tea, her Madeleine conveys full knowledge of how flawed her partner of 50 years is and how, despite his failings, her love for him is unshakeable and eternal.

The final moment between these two great actors almost balances out the annoyances of the rest of the play. Almost.

Labels: The Height of the Storm