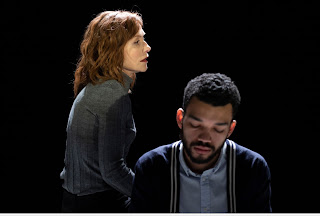 The French playwright Florian Zeller likes to get inside people’s heads.  And the more troubled those heads the better.  Frank Langella won a Tony in 2016 for playing the title character in Zeller’s drama The Father, a devasting portrait of a man disintegrating into dementia. Earlier this year, the playwright took on the mental instability that hits some young men in their teens in The Son, which received rave reviews and is playing at London’s Kiln Theatre through April 7. And so one of the shows I was most excited about seeing this season was Zeller’s The Mother, which opened this week at The Atlantic Theater Company with the movie star Isabelle Huppert in the title role.

Alas, I couldn’t have been more disappointed.

Perhaps Zeller, a man who turns 40 in June, just couldn’t figure out the psyche of a middle-aged woman. The mother in question is a white French woman called Ann. She’s chicly dressed and sitting on an obviously expensive white leather couch when the audience enters the theater.

The couch, which stretches across the breadth of the wide stage, seems to go on forever. The actress, known for her intense presence in such movies as "The Piano Teacher" and "Elle" is surprisingly petite. The combination provides a visual image that almost screams it’s a metaphor for how domestic life is overwhelming the character.

For with Ann’s son and daughter now grown and out of the house and her husband still busy with work, she is experiencing a breakdown that she attempts to self-medicate with booze, pills and thoughts that range from the paranoid to the surreal.

All of those thoughts are enacted onstage. And then re-enacted to underscore Ann’s mania and her losing grip on reality.  So we see her cross examining her American husband, stoically played by Chris Noth, about why he’s late. And then the scene plays out again. And again.

We also see her repeatedly chiding and then wooing her beloved grown son, coolly played, in a gesture of colorblind casting, by the African-American actor Justice Smith (click here to read more about this promising young actor).

A fourth character played by Odessa Young may be Ann’s daughter, her son’s fiancé, her husband’s mistress or a medical professional called in to take care of her, which adds to the general confusion.

I get that the disorientation is intentional but although the show only runs 90-minutes, it seemed interminable. Plus while I’m willing to grant dramatic license, it’s hard to believe that an empty nest would cause a woman to fall completely apart in this day and age when so many Baby Boomer women are celebrating the fact that we can finally focus on ourselves.

I don’t know if the blame for these missteps rests with Zeller; with his frequent translator, the British playwright Christopher Hampton, or with director Trip Cullman but it was also hard to tell what was supposed to be real and what was supposed to be only in Ann’s mind. Is her husband really cheating on her?  Does her son really want to kill her? After a while, I gave up trying to figure it all out—or caring about any of it.

Other reviewers have heaped praise on Huppert’s performance. And she is good, delivering a committed and fierce performance (click here to read a Q&A with the actress). But Huppert’s French accent also made it hard for me to understand all of her dialog.

Although I don’t know if it would have made a difference if Huppert had enunciated with Ethel Merman-like clarity. The Mother seems uncertain of what it wants to say and the parts of it that can be understood seems woefully out-dated.