Why "The Lehman Trilogy" Disappointed Me

Sometimes you want to like something more than you actually do. That’s how I feel about The Lehman Trilogy, which has just opened at the Park Avenue Armory to rapturous reviews. 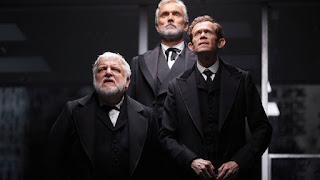 I’d been expecting rapture too. I’d read the exultant reviews when the show, a nearly three-and-a-half hour chronicle of the rise and fall of the Lehman Brothers investment firm, wowed London audiences. I knew that it was one of those big British state-of-the-world pieces that I admire (I’m among the few who loved the short-lived New York production of Enron) that it starred three fantastic actors, led by the always-great Simon Russell Beale; that it was staged by Sam Mendes, now at the top of his directorial powers (click here to read about him); and that it even had a clever modernist set by the hip designer Es Devlin.

So what was there not to like? I prayed for the show to come to New York. My theatergoing buddy Bill and I bought tickets back in September, within an hour of their going on sale. And I felt smug as we made our way into the cavernous Armory to see it. I’m not sure when the show lost me.

Maybe it was within the first few moments when I realized that the story of the three Jewish brothers who emigrated from Bavaria to the U.S. in the mid-1800s wasn’t going to be dramatized but narrated with the actors speaking in the third person to describe how their characters made the journey from poor immigrants to cotton merchants to merchant bankers to the avatars of Wall Street greed when the firm’s collapse in 2008 helped spark The Great Recession.

Or perhaps it lost me as I struggled vainly to keep the relationships between all of the characters straight. For without ever changing their 18th century frock coats, Beale, Ben Miles and Adam Godley play not only the three founding brothers but their children and grandchildren, their wives, customers, business associates, rivals and eventual successors.

Or it could be that it’s just harder than I thought it would be for me to work up much sympathy for people whose foundational fortune was rooted in the slave labor of the 18th century and whose irresponsibility later lead to the misery of the millions who lost their livelihood and their life savings in the economic downturn of the 21st.

And it didn't help when I got home and discovered (thanks Wikipedia) that many of the events chronicled in The Lehman Trilogy hadn’t occurred at all. This may be a spoiler for those of you who have tickets to the show's sold-out run but Bobby Lehman, the last family member to chair the firm, died at age 77.

I suppose the Italian playwright Stefano Massini who conceived The Lehman Trilogy as a five-and-half hour radio piece; and Ben Powers, the longtime dramaturg at London’s National Theatre who adapted it into English for the stage, mean the play to be a parable about the perils of unbridled capitalism.

But the play's tender attitude toward the Lehmans, accompanied by a melancholy piano score performed live by Candida Caldicott, undercuts that. And I just can’t mourn this loss of American innocence when I know it was steeped in self-interested collusion with the country’s original sin.

Not all is lost. Mendes’ direction keeps things moving along and Luke Hall's projections are acid-trip glorious. Devlin’s set, a transparent box that revolves between a modern-day conference room on one side and stacks of timeless cardboard boxes on the other, is as elegant as advertised, albeit not as innovative for theatergoers who've seen similar setups in the recent Young Vic revivals of A Street Car Named Desire and Yerma.

And the actors are flat-out terrific, adeptly modifying the inflection of their voices and the physicality of their movements as they slip into the roles of different characters (the toad-shaped Beale is a particular delight when he morphs into female characters). But there were simply too many people to keep track of and too little time to develop real feeling for any of them once the original siblings died.

A family tree in the program tries to help, as does a timeline a page or so later and several essays on immigration and Jewish identity in America. But shouldn't a play be able to stand on its own two feet?

And while I’m griping, let me register a complaint about that program itself, which is the unwieldly size of an old copy of Life magazine. Like The Lehman Trilogy, its ambition seems outsized. As perhaps were my expectations for what is essentially a pretty pageant of America’s checkered financial past that I really wanted to like but found difficult to cheer.