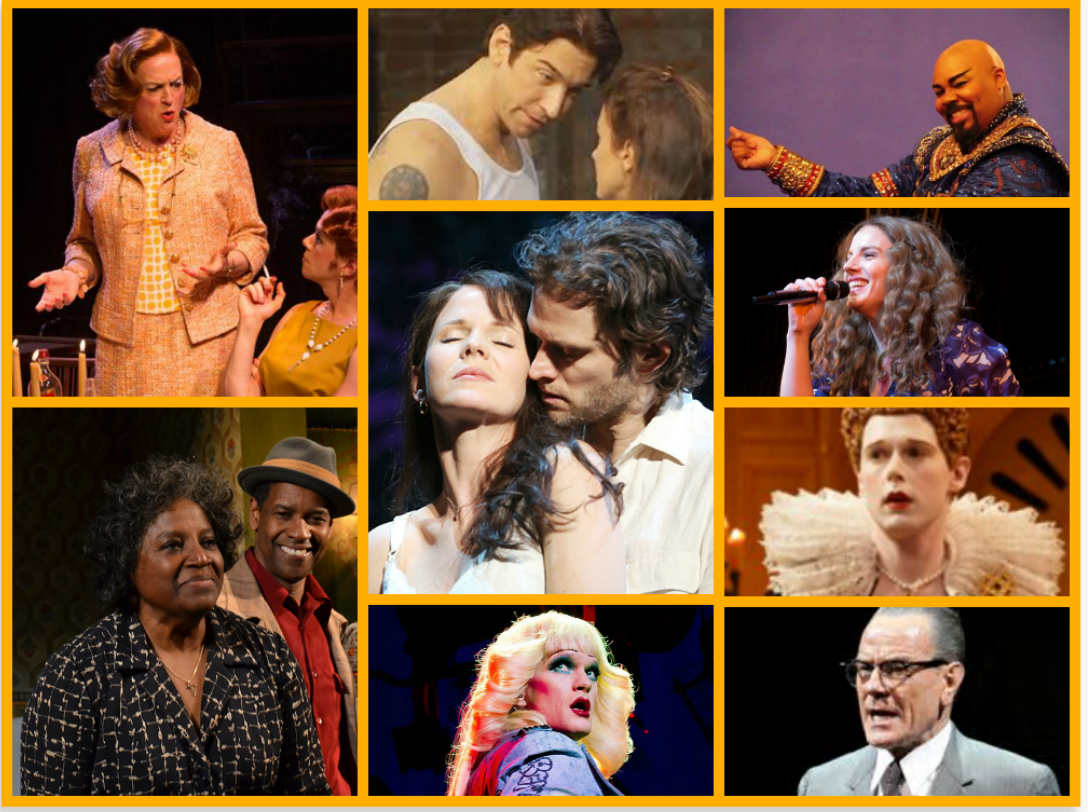 The Tony nominations announced yesterday morning were as perplexing as ever. Maybe even more so. As happens every year, some “sure things” got left out (almost none of the big name movie stars who appeared on Broadway this season got nominated, although the New York Post columnist Michael Riedel says Denzel Washington came close for his performance in A Raisin in the Sun; click here to read how he just missed the mark).  Meanwhile some who-wouda-thunk-its managed to make the list (I’m too polite to name those names). You can see all the nominees by clicking here.

Shows that failed to score as big as they’d hoped have already begun posting closing notices. Estelle Parsons, who missed performances last weekend due to illness, picked up a Best Actress in a Play nomination for The Velocity of Autumn but the show earned just 11% of its potential gross last week and the producers, figuring that the sole nomination of their 86-year-old star wasn’t enough, announced that the two-hander, which also stars Stephen Spinella, will close this weekend.
As usual, people are grinning, or gnashing their teeth, through it all. But the biggest surprise of the day is that gnashing hardest of all is the New York Times critic Charles Isherwood. A passionate champion of the playwright Will Eno, Isherwood was so upset that Eno’s play The Realistic Joneses got totally shut out that he callously dissed the four plays that did get nominated (click here to read what he wrote).

The 33 nominators (click here to see who they were) did some dissing of their own too. Tom Kitt and Brian Yorkey, the team behind the new musical If/Then, and Jason Robert Brown, who wrote my favorite of the season The Bridges of Madison County, are much admired by the Broadway community. But while Kitt and Brown got nods for their scores, their shows got shut out of the running for the all-important Best Musical award.
Similarly, as the New York Times’ Patrick Healy pointed out in his smart analysis of this year's slate (click here to read what he had to say) all of the folks who directed new plays were passed over and the Best Director of a Play slots went to the guys who did revivals.

But the truth of the matter is that the nominating committee had a harder time this year. There were no frontrunners, shows like The Book of Mormon or even last year’s winner Kinky Boots that roused passionate emotions (Isherwood excepted, of course).

So the nominators obviously just went with their gut feelings. And there was a lot of good stuff to choose from over the past 12 months and work that is worthy of winning the awards that will be announced at the ceremony that CBS will broadcast on June 8.

But with a field this wide open (A Gentleman’s Guide to Love & Murder picked up 10 nominations but still isn’t a sure thing for the top prize) the debates are going to be fiercer than ever.

So once again, my theatergoing buddy Bill and I have decided to weigh in with one of our occasional recorded conversations. Click the orange button below to hear us sound off on what we thought of the choices, the non-choices and the Isherwood outburst: