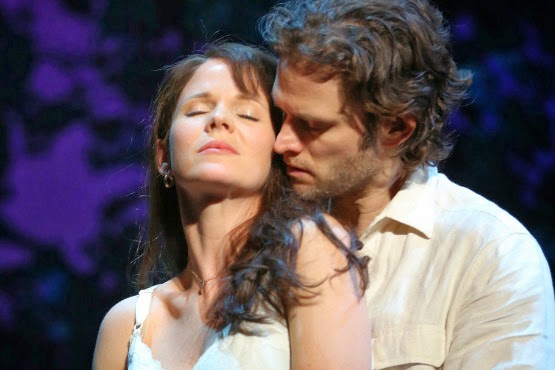 The new musical The Bridges of Madison County isn’t doing well. And I’m not sure why. It’s based on the 1992 novel about the star-crossed love affair between a war bride turned Iowa housewife named Francesca and a peripatetic photographer named Robert that sold some 50 million copies.  The 1995 movie version with Meryl Streep and Clint Eastwood took in over $180 million. And this new musical, with a gorgeous score by Jason Robert Brown and sensational performances by Kelli O’Hara and Steven Pasquale is the best interpretation yet.

Maybe the show isn’t doing so well because even though it has an 18 member-cast, it’s an intimate production that doesn’t have people flying around the auditorium, hydraulic scenery that menaces the audience, songs from the baby boomer era or flashy Hollywood names that make people feel they’re getting their money’s worth when they shell out over a hundred bucks per ticket.
But what The Bridges of Madison County does have is an engaging and affecting book by Marsha Norman that would be right at home in the Golden Age of musicals, to-swoon-for ballads by Brown and two great-looking and great-sounding leads, all brought together by Bartlett Sher's deft direction which nimbly walks the line between romance and schmaltz.

The show is both cinematic and theatrical. Scenes flow from Francesca’s farmhouse to the state fair, where her husband (played with unshowy dignity by Hunter Foster) and children have gone away for the weekend to show off their prized pig and, of course there are detours to the state’s famed covered bridges (click here to read about the impressionistic set).

But Norman (click here to read an interview with her) and Sher have opened up the story to bring in the townspeople, who provide a little comic relief and sit along the sides of the stage in Our Town-style, a moral presence even when not directly involved in the action.

Meanwhile, Brown, who has been Broadway’s next big thing ever since he won the Tony for Parade back in 1998 (click here to read a profile of him) pours all of his prodigious talent into a score that ranges from Americana to operetta. And although I would have liked a few more upbeat numbers, I could listen to the songs he’s created for this show endlessly.

Brown actually wrote the part of Francesca for O’Hara, who is the Julie Andrews of her generation, a pretty woman with a beautiful voice and the ability to play both comedy and drama. And O’Hara has never been better than she is here as a complex woman who’s resigned herself to a simple life and then is given one final chance at something more.

I’ve always admired O’Hara (how could one not?) although her cool perfection kept me from being a true fan. But the actress had her second child last fall and is still a little pudgy, which gives her a vulnerability that helps make her portrayal of Francesca entirely believable (even though it calls for her to be a brunette with an Italian accent) and made me ready to sign up for full membership in the Kelli O’Hara fan club (click her to read a Q&A with her).
O’Hara’s co-star Pasquale is, of course, a certified hunk but he doesn’t rest on his pectoral laurels but brings an inner sadness to Robert that makes it clear why this man of the world would so want this farmer’s wife. I can’t imagine hetero women of any age being able to resist his yearning.

And all this is why I can’t figure out why the show isn’t getting better word of mouth and doing better at the box office. I’m guessing that the producers are trying to hang on until the awards nominations, particularly those for the Tonys, are announced later this month.

But the competition will be stiff because this has been an unusually prolific season for new musicals (an even dozen have opened over the past eight months) and the race for best actress (with O'Hara facing off against Sutton Foster, Audra McDonald, Marin Mazzie, Idina Menzel and Jessie Mueller) will be particularly fierce.
The Tony administration committee recently voted to expand the number of candidates for some categories (click here to read more about that). And the jockeying for frontrunner and underdog status has already begun. Singer-songwriter Carole King showed up at Beautiful, the bio-show based on her early life, this past weekend (click here to read about that).

The Bridges of Madison County may not have that kind of card to pull out of its sleeve and I confess that I haven’t yet seen all of its rivals, but I’m still keeping my fingers crossed that this underappreciated gem is given the chance it needs to shine.

Labels: The Bridges of Madison County

I couldn't agree more! BRIDGES is definitely one of my favorites of the season. As you said, beautiful score, engaging book, amazing stars. A true theatrical thrill!

I hope the Tonys give it the boost it needs.

JK, sorry to have been so tardy in posting your comment but I've been running around like a mad woman trying to keep up with all the openings and so haven't been moderating my comments in a timely fashion. Still, am so glad you liked the show and will be hoping along with you that it gets some Tony love when they announce the nominations on April 29th.