How "Aladdin" Worked Its Magic on Me 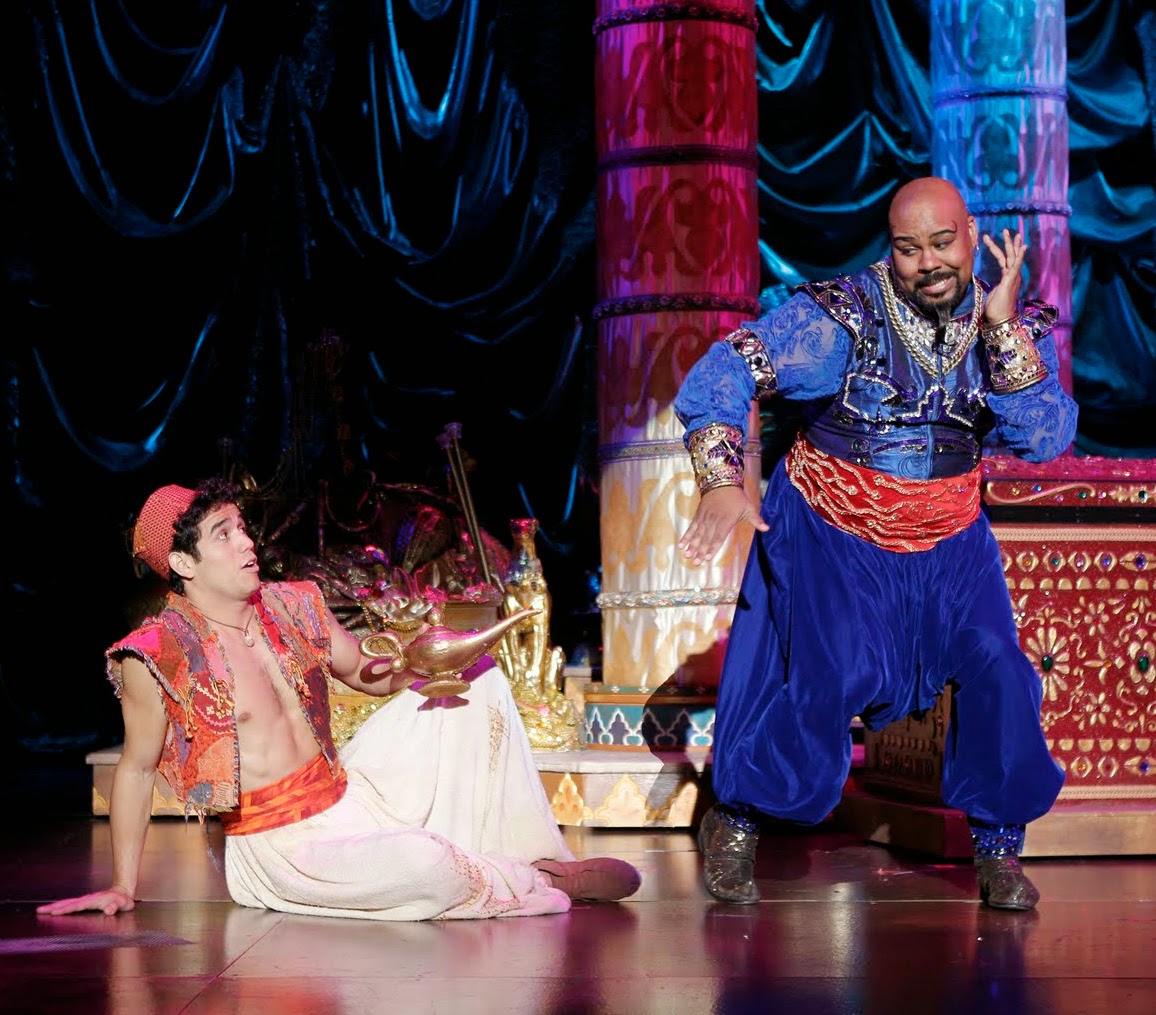 Standing ovations have become so much a part of the Broadway theater-going experience that the producer Ken Davenport recently conducted a survey to find out why people keep jumping up at the end of shows (click here to read the results.)

But no survey is needed at the new Disney musical Aladdin, which has begun what will probably be a long run at the New Amsterdam Theatre. Because the standing-O comes towards the end of the first act and it's clear, at least it was at the performance my sister Joanne and I saw, that pure joy is bringing people to their feet.

Say what you will about the folks at Disney Theatrical (and people have said plenty about how its cartoon-to-musical transfers are just assembly line products) they know how to put on crowd-pleasing entertainment.

Aladdin is adapted from the beloved Arabian Nights folktale about a poor boy who finds a magic lamp and discovers that rubbing it releases a genie who will grant his wishes. Aladdin uses his wishes to become rich, woos the beautiful daughter of the sultan and thwarts an evil vizier who threatens to take over the kingdom.

The 1992 film version, best remembered for Robin Williams’ antic voicing of the genie, has always been the most jokey of the company’s animated films and the stage show is just as unabashedly silly, filled with the same kind of low-brow humor and bad puns like "Dancing with the Scimitars."
The show's tuneful score by Alan Menken with clever lyrics by Howard Ashman, who died from AIDS before the project was done, and Tim Rice is the same one that won an Oscar for the film version and was a repeat play mainstay for many Gen-Xers.

Menken has added a couple of news songs for the stage version and additional lyrics have been written by Chad Beguelin, who wrote the book, which changes a few talking-animal characters into human ones and tones down some of the potentially offensive ethnic references that might have slipped by in 1992 but wouldn’t today.
Aladdin's exuberant song-and dance-routines are devised by Casey Nicholaw, who both directs and and choreographs the show. The resulting production numbers—which throw in everything from big band riffs and Broadway send-ups to pop cultural shout-outs and circus-style acrobatics—literally beg you to like them. And it’s hard to say no.

The numbers are performed by an energetic—and typically for Disney, multi-ethnic—cast of 34. There are a couple of familiar faces—or voices—among them. Jonathan Freeman who provided the voice for the vizier Jafar in the film now gets to play him on stage. And Clifton Davis, who was nominated for a Tony back in 1972 as one of The Two Gentlemen from Verona, plays the sultan.

But betting on the long game, Disney tends not to cast names in its shows so that the roles will be easily replaceable over lengthy runs. So it's found two fresh-faced young leads for Aladdin. Courtney Reed is appropriately pretty and perky, even if a touch bland, as Princess Jasmine. But Adam Jacobs is totally winning as the title character.
As in the movie, however, the true star of the show is the Genie, here played by James Monroe Iglehart. Instead of trying to fill Williams shoes, Iglehart has created a flashy pair of his own (click here to read an interview with him).

A large black guy (6 feet and 220 lbs.) with a bald head and a mischievous smile, he is quick with the quips and charmingly light on his feet. It’s his rendition of “Friend Like Me” that stops the show.

Iglehart is terrific and is sure to be on all the awards ballots but he’s not the only reason to see Aladdin. Gregg Barnes’ midriff and chest-baring costumes—and there seem to be yards of them—are vibrantly colored, lavishly decorated and almost worth the price of admission.

Bob Crowley’s storybook sets are just as delightfully vivid. And there are marvelous feats of magic devised by illusion designer Jim Steinmeyer, including a how-do-they-do-that flying carpet.
But unlike The Lion King or Beauty and the Beast, Aladdin isn’t the kind of show to win the hearts of critics (it’s scored only a grudging B on StageGrade, which aggregates the reviews of the top New York critics; click here to see some of what they had to say).

For unlike its rivals for this year's Tony for Best Musical, Aladdin isn't trying to be the kind of serious or groundbreaking show that folks who consider themselves high-brow theatergoers like.  And I can't say it's my favorite show of the season either. But it is the one where I've had the most fun.