"Of Mice and Men" is Mighty Damn Good 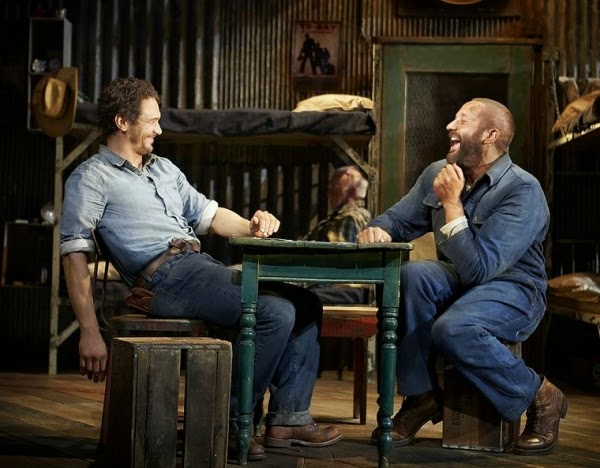 Appearing in a Broadway play has become almost as popular with Hollywood stars as having a charity of their own. Of course, some Hollywood actors—Al Pacino, Meryl Streep, Denzel Washington—have long been as adept onstage as they are onscreen. But others are so tentative once they get in front of a live audience that you can see the fear in their eyes and that apprehension can throw off the entire production.

Luckily, the latter is not the case with James Franco and Chris O’Dowd, who seem totally at home onstage as the odd-couple drifters George and Lennie in the poignant revival of John Steinbeck’s Of Mice and Men that opened at the Longacre Theatre last week.
The novella on which Steinbeck based the play has been a standby in middle and high school English classes almost since he first published it back in 1937 (click here to read about the history of the play).

So you probably already know the story of the migrant workers who move from one back-breaking job to the next in California’s Salinas Valley, all the while dreaming of saving enough money to buy a small farm of their own where they can "live of the fat of the land.”

But the odds are stacked against people like George and Lennie and the other forgotten men with whom they share a bunkhouse on the ranch that is their latest job. A series of confrontations with the boss’ bully-boy son Curly and Curly’s restless wife leads up to one of the most affecting scenes in American literature.
Franco plays George, who is the savvy one of the duo, and the role is a great choice for this actor, whose well-publicized moonlighting as a grad student, a poet and a conceptual artist makes it clear that he takes pleasure in showing off his own smarts (click here to read a pre-opening interview with the actor).

Franco has been angling to carve a Broadway notch on his belt of accomplishments. He and Nicole Kidman were supposed to do a revival of Tennessee Williams’ Sweet Bird of Youth three years ago (click here to jog your memory on that one) but that production never got off the ground.

He’s obviously had better luck with Of Mice and Men and while Franco doesn’t deliver a wow performance, his intelligence and natural charisma do make him compelling to watch.

There’s no fear in his eyes either. Or anywhere else, for that matter. When New York Times critic Ben Brantley failed to cheer Franco’s performance, the actor took to Twitter with a controversial pan of his own (click here to read about that).

But the true star of this production turns out to be O’Dowd. I’d wrinkled my nose when I heard that the actor best known for comedic roles in TV shows like HBO’s “Girls” and movies like “Bridesmaids” and “Dinner for Schmucks” was going to play Lennie, the emotional heart of this tragic story. What I didn’t know is that the Irish-born O’Dowd also has a bunch of stage credits to his name.

And it shows. Lennie is a hulk of a man who has the mind of a child, but O’Dowd doesn’t portray him as just some generic mentally-disabled giant. He turns Lennie into a real person, innocent at moments, devious at others, heartbreaking throughout. It’s a terrific performance.

But the entire production, directed with great finesse by Anna D. Shapiro, is first rate. Todd Rosenthal’s striking set, seeming to have emerged from a Walker Evans or Dorothea Lange photo, evokes the stark beauty of the Dust Bowl era and is beautifully lit by Japhy Weideman.

And the supporting case is uniformly excellent, although I can’t help giving a shout-out to Jim Norton, particularly moving as an elderly worker who lost a hand in an accident and knows that he will eventually be put aside as easily as the aging dog who is taken from him and shot at the beginning of the play.
The only weak spot is Leighton Meester, the whippet-thin actress who made a name for herself on the TV show “Gossip Girl.” She plays the sole woman in the show, the character known only as Curly’s wife.

Meester gets points for trying a different take that attempts to bring a more innocent quality to a character usually played as a floozy. But the actress lacks the chops to bring it off.

Some people, including my theatergoing buddy Bill, have complained that Of Mice and Men is too old-fashioned, too melodramatic and too-well made with too much foreshadowing and telegraphing of what’s to come.

But none of that bothered me. I like a play that knows where it wants to go and is confident enough to share its direction with the audience. And I like even better when, like this production, it knows how to get there.

I loved this production. I was most excited for Chris O'Dowd and he was terrific - so heartbreaking as a man/child who doesn't realize his own strength. But I was also very impressed by James Franco. I love how understated he was - delivering Steinbeck's plain language in a way that seemed so natural. When so many dramas seem to be played for laughs these days, I really appreciated Anna D. Shapiro's restrained direction.

Hey Esther, I'm glad you saw and liked this one. And I'm grateful for your taking the time to leave a comment about it.