"The Library" Isn't as Savvy as It Should Be 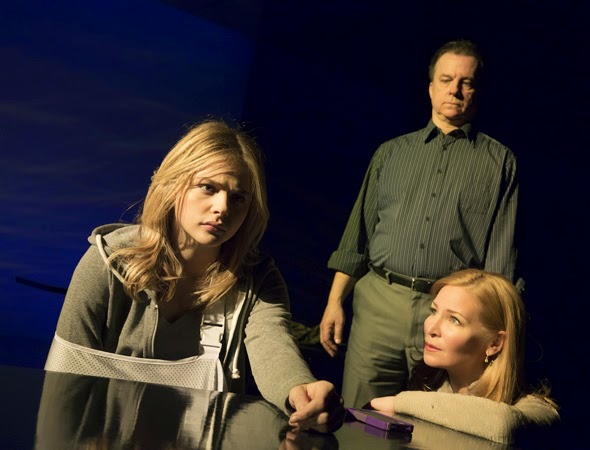 Moviemaking—the old-fashioned kind with people and plots but no aliens or armageddons—has become so rare in Hollywood that there’s been a mass migration of some of its best talent into TV…
and the theater.

The latest high-profile name seeking refuge within a proscenium is the Oscar-winning director Steven Soderbergh, who last year announced that he was giving up movies and is now making his theatrical debut at the helm of The Library, a new ripped-from-the-headlines drama that opened at The Public Theater last night and plays thru next weekend.

The plot centers on the aftermath of a Columbine-style high school massacre. As in the real-life tragedy, the media latches onto the tale of a girl who reportedly prayed before being shot. But the play’s central character is another girl named Caitlin Gabriel, who survived the shooting but is accused by another survivor of telling the killer where some of her classmates were hiding.

Caitlin says she didn’t do it and thus the stage is set for a substantive examination of contemporary issues like the devastating effect trauma can have on a community and the destructive ways in which the media can complicate the healing process. A different production might have delivered on all of that potential but this one doesn’t do it.
The Library is written by Scott Z. Burns, a screenwriter with whom Soderbergh has collaborated on such films as “The Informant,” “Contagion” and “Side Effects.” The play marks Burns’ stage debut as well and the production might have been better off if one of its creators had had more stage experience. Because The Library comes across more as the treatment for a movie than a fully realized play (click here to read about their adjustment process).

Soderbergh, so fluent in the art of filmmaking that he often serves as his own cinematographer, hasn’t a clue about how to stage a play. He has created one arresting image: as the audience enters the theater, a girl is lying still on a table lit by an oddly unsettling blue light. But his imagination seems to fail him after that.
For the rest of the play, he just directs his actors to walk on, face the audience, say their lines and then walk off. Sometimes they stand on one of the five tables that constitute the play’s entire set. At other times, a light flashes, signaling the beginning or end of a scene, like a fill-in for the cut-to cues in a film.

But even under those circumstances, some of the acting is quite good. The 17-year-old actress Chloë Grace Moretz is another stage newcomer but she is able to turn her callowness into the vulnerability that Caitlin struggles with (click here to read more about the actress). Meanwhile, Michael O’Keefe manages to convey the subtle nuances of a father who wants to believe his daughter but can’t get beyond his doubts.
Jennifer Westfeldt and Lili Taylor don’t fare as well as, respectively, Caitlin’s mom and the mother of the dead girl who prayed during the attack. Each of their characters is given just one note to play, revealing shamefully too little of what these fine actresses can do.

I also found it disappointing that Burns and Soderbergh seemed to take religion seriously at the start of the play but then quickly fall back on clichés about the malevolence of people of faith.
And yet, I still found myself wanting to see what Soderbegh and Burns might do back on their home turf with a movie version of this story. I suppose I’ll just have to hope that Soderbergh changes his mind about filmmaking. And if I'd had the courage I could have asked him.

After the show, my husband K and I had dinner at the Public’s new restaurant, which, a little confusingly, is called The Library. The restaurant is obviously convenient, the food is fine and the prices not awful but it’s probably not the best place for an honest conversation about how you feel about the show you just saw.
A few minutes after we sat down, Soderbergh came in with the actress Jennifer Ehle and joined some friends at a table near ours. In true New-Yorkers-know-how-to-give-celebrities-their-privacy fashion, we pretended not to notice.  Or to notice that Stephen Sondheim and his frequent collaborator John Weidman were sitting across the room from us.