"Luce" Joins the Line of Great Bargains at LCT3 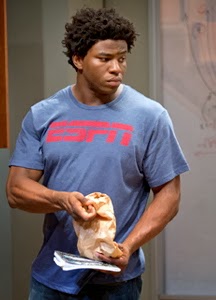 Everyone complains about ticket prices and rightly so.  Seats for the starry revival of  Betrayal, directed by Mike Nichols and starring Daniel Craig and Rachel Weisz, cost up to $185 each at the box office and go for as much as $500 on eBay. But savvy theatergoers know there are bargains to be had. And among the best in town are the shows at LCT3, the new plays division at Lincoln Center Theater where all tickets are just $20.

And the shows it puts on offer a terrific bang for those relatively few bucks. For LCT3’s artistic director Paige Evans and her staff have an eye for fledgling talent, a taste for thought-provoking subjects and the guts to put them both on. Past productions have included Amy Herzog’s 4000 Miles, Greg Pierce’s Slowgirl and Ayad Akhtar’s Pulitzer Prize-winning Disgraced.

Its latest production is Luce, a psychological thriller by the young playwright JC Lee that is playing at the company’s lovely little Claire Tow Theater through Nov. 17. And although Luce isn’t as strong as the plays I just named, it still offered one of the most satisfying evenings I’ve had in the theater so far this season.

Evans and her staff have a predilection for stories about the dynamics in troubled families. And Luce is no exception. It opens with an uneasy parent-teacher meeting between Harriet, a teacher at a self-consciously liberal academy in some unnamed American suburb, and Amy, the adoptive mother of one of the school’s star pupils and prized athletes, the titular Luce, who was orphaned by the ongoing war in the Congo and brought to this country, new parents and a new way of life when he was 7.

Now, 10 years later, Harriet believes that Luce, perhaps scarred by the horrors he witnessed as a boy, has been displaying violent tendencies. A paper he wrote so worried her that she searched his locker, where she found fireworks, which, Harriet reminds Amy, can be used as explosives.

The rest of the 90-minute play pivots around the questions of whether Luce is the lovable kid that Amy and her husband Peter have raised or a terrorist-in-the-making.

The parents’ struggle to figure out what to do and how to protect their child is a little too similar to the dilemma in A Kid Like Jake, the previous LCT3 offering about the parents of an effeminate boy (it, too, started with an uneasy parent-teacher conference). But I suppose it makes sense that young playwrights still in the write-what-you-know mode might focus on the parent-child dynamic.

The overlay of race in Luce—Amy and Peter are white, Luce and Harriet are black—adds a fresh spin on the subject and should add tension to the plot but Lee and director May Adrales skirt around that subject, settling instead on the more audience-friendly issue of how well any parent can truly know a child (click here to read a piece about their approach to the play). But their reluctance to wrestle with the culture clash saps energy from what might have been a more revealing look at the longstanding nature vs. nurture debate.

Luckily, the performances—all five of them, including Luce’s erstwhile girlfriend—keep it compelling. Okieriete Onaodowan is an ideal Luce. The actor imbues the character with an easy charisma that makes it clear why people, particularly his mother, are so charmed by Luce. But Onaodowan also uses his physicality—he’s a large and imposing guy—to suggest an underlying menace in Luce.  He keeps the audience guessing.

Marin Hinkle is equally impressive as Amy, who doesn’t want to accept the idea of any fault in her son, in no small part because she believes doing so would be an acknowledgment of her own failure as a mother.

The play refuses to provide easy answers and over a post-show dinner at PJ Clarke’s, my theatergoing buddy Bill and I continue to chew on the questions it had raised.  Luce may not be a great show but we got more than our money’s worth.