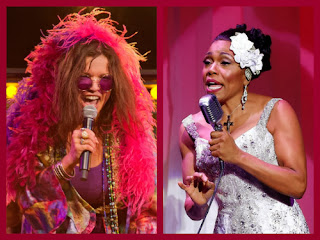 When a musician records work closely identified with a more iconic artist, it’s called a tribute album. And recently, as the number of shows featuring actors doing the same thing has grown, some people have begun calling them karaoke shows.

The trend got a big boost back in 2005 when John Lloyd Young and his co-stars stepped into the roles of Frankie Valli and the Four Seasons in Jersey Boys. It stumbled a bit with the ersatz Elvis Presley, Johnny Cash and Jerry Lee Lewis in Million Dollar Quartet, picked up some steam with British actress Tracie Bennett’s impersonation of Judy Garland in End of the Rainbow and hit its groove with Motown, which features imitations of all the record label’s famed stars singing and dancing their way through its catalog of classic soul songs.

And the fall season has brought us some new contenders, including a rendition of the singing rabbi Shlomo Carlebach in Soul Doctor, which closed after just 66 performances, a faux Billie Holiday in Lady Day at the Little Shubert Theatre through March 17 and a fake Janis Joplin in A Night with Janis Joplin, which is playing at the Lyceum Theatre through Jan. 5.

Both of the new shows feature very talented women in the title roles but as Marvin Gaye and Tammi Terrell used to sing,  there ain’t nothing like the real thing.
I’m not going to say too much about Dee Dee Bridgewater because she and my husband K once ran in the same circles. But anyone with access to Google can find out that she’s a Tony winner for her performance as Glinda in The Wiz and a Grammy winner for her jazz recordings, including a tribute album of Billie Holiday songs (click here to read a great interview with her).

Meanwhile Mary Bridget Davies has built a successful career on channeling Janis Joplin, even touring for a time with Joplin’s old band Big Brother and the Holding Company.
Both Bridgewater and Davies clearly admire the women they’re impersonating. But performers who become legends have an ineffable quality that can’t be duplicated. So even though Davies wears Joplin’s granny glasses and feathered boas, tosses her hair around the way the singer used to do and affects the blues growl that Joplin used to sing her songs, there’s something missing.
One of the things that made Jersey Boys work was the Behind-the-Music story of the group’s rise and fall and then the unexpectedly happy ending of its rising again on the oldies circuit. Both the book writers for the Holiday and Joplin shows haven’t figured out how to make their star’s tales into compelling shows.
Doing double duty as both writer and director, Stephen Stahl builds Lady Day around the rehearsal and performance of a pivotal concert Holiday has to perform in London because her drug arrests have caused her to lose the cabaret license she needs to work back home in the States. Flashbacks about her earlier life, including a childhood rape, are wedged between the numbers she and her four-member band perform. The overall effect is clunky, disjointed and uninvolving.
Randy Johnson, who wrote and directed A Night with Janis Joplin, takes a concert approach with Joplin too but, perhaps because the singer’s real-life siblings and heirs have been so involved with the project (click here to read an interview with them), the show skips over things like Joplin’s drug abuse, bad love affairs and often crippling insecurity. If you knew nothing about the singer before seeing this show, you’d come out thinking she’d been little more than just “a white chick who loves to sing the blues” and maybe drink a little.
The music should save these shows. And I could feel the audience exhaling and settling in whenever Bridgewater broke into familiar songs like “God Bless the Child,” “Good Morning Heartache,” “Lady Sings the Blues” and other favorites from the Holiday songbook.
But Joplin, who OD'ed at 27 (Holiday died at 44)  had fewer hits and so the show that’s ostensibly about her is padded out with performances by women pretending to be the icons who inspired her: Bessie Smith, Nina Simone, Odetta, Etta James and Aretha Franklin. The singers playing those legends are talented too but they just gave me more reasons to want to get home and hear the originals.

Now I know that people, particularly Baby Boomers, like these tribute musicals (A Night with Janis Joplin is playing to houses around 80% full). And I’m not putting those people down.  My sister Joanne is a charter member of their club.

Jo loves a show where she can walk into the theater humming the tunes and then mouth the lyrics as the actors perform them onstage. She’s always the first person I call when one of these shows comes to town.  And she had a good time at both of these.

So it seems, have many other people who have seen them.  I was sitting on the bus a few days after seeing the Joplin show when two women seated across the aisle from me struck up a conversation about A Night with Janis Joplin.  “It’s just like seeing the real Janis,” one told the other.  But, you know, it’s really not.