Why I'm Going Along with "And Away We Go" 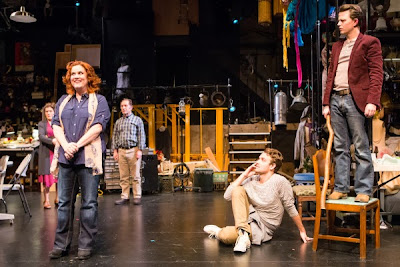 People who love theater love shows about the theater.  Which is why there are so many backstage musicals, dramas and comedies from 42nd Street to the upcoming Bullets Over Broadway, from The Seagull to Noises Off.

And it’s also why my theatergoing buddy Bill and I, diehard theater junkies, tramped over to the far western stretch of 42nd Street to see The Pearl Theatre Company’s production of And Away We Go, Terrence McNally’s chronicle of significant moments in theater history, which opened this week for a very limited run that’s scheduled to end Dec. 15.

I had been expecting a cavalcade of scenes similar to the ones in David Mamet’s A Life in the Theatre in which two actors dress up in an assortment of costumes to perform mock versions of plays that range from farce to melodrama. And Away We Go’s posters, with actors decked out in brocaded 18th century garb, seemed to promise something like that.

And Away We Go does offer a waiting-in-the-wings look at performances ranging from the ancient Greek festivals at which mask-wearing members of the chorus invoke the mercy of the gods to the late 20th century morality plays in which AIDS-ravaged young men yearn for the deliverance of angels.

There are also stops in between at Shakespeare’s Globe, the Comédie-Française, the Moscow Art Theatre and the Coconut Grove Playhouse where Waiting for Godot made its American debut in 1956.  But, be it due to budget constraints or aesthetic preference, very little is done to simulate any of those settings.

Instead, the set, designed by Sandra Goldmark, looks like a ramshackle prop shop, crammed with period furniture, old lighting equipment, leftover costumes and casts of actors’ heads. It’s all great fun to look at and provides an entertaining alternative whenever the play's action flags.

The actors walk onto the stage in contemporary clothes, which they wear throughout the next 100 minutes, whether they are recreating a scene at the 16th century dining table of Richard Burbage, who originated the roles of Hamlet, Othello and Richard III, or a samovar break during a rehearsal for a Chekhov premiere around the turn of the last century.

This all puts a lot of burden on the performances. And, alas, the acting by six members of The Pearl's resident company, including two newcomers, is uneven.

Stripped of the conventional ways—costumes, makeup, props—to create their characters, the actors lean heavily on ethnic accents to distinguish the different people they play in each scene. But some focus so much on getting the intonation down that they forget it’s equally important to get the words out in a way that the audience can understand them.

They’re also called upon to be emotionally fluent as the scenes flow into one another, changing settings with no advanced warning. And here again, the results are spotty. Some actors hit the comedy too hard, while others make the pathos too hammy. One of the few to navigate a steady course through it all is the company’s longtime leading man Sean McNall.

And yet, it’s hard to resist McNally’s obvious love of actors and his deep appreciation for the survival of their art form. He lards And Away We Go with references to the precarious nature of the theater that draws intentional comparison to The Pearl’s own financial situation, which has been so shaky that it prompted an emergency letter to the company’s subscribers earlier this year (click here to read about it).

I usually hate that kind of meta stuff and I’ll confess that these embedded pleas for support did take me out of the play. But in the end, I got on board because I, too, want the theater—including The Pearl and its continuing commitment to performing classics like the Greeks, Shakespeare and Chekhov—to keep going and going.

Labels: And Away We Go