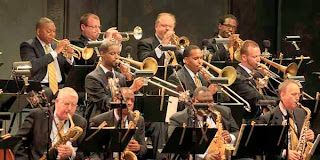 Big stars were supposed to provide the thrills this fall theater season but so far the response to most of them has been kind of tepid.

Now it’s true that Cherry Jones and Zachary Quinto have won deservedly high praise for their performances in the revival of The Glass Menagerie but the response has been deservedly muted to Mary-Louise Parker’s turn in The Snow Geese.  Meanwhile, both critics and audiences have been divided over the work of Daniel Craig and his real-life wife Rachel Weisz in the Mike Nichols-directed revival of Betrayal and towards Jeff Goldblum and Laurie Metcalf in Domesticated off-Broadway at Lincoln Center.

But one of the few performances that has drawn uniform praise this season is that of The Jazz at Lincoln Center Orchestra, which is, at least through this weekend, doing double duty in two new productions: After Midnight, which opened to a chorus of raves at the Brooks Atkinson Theatre last week, and A Bed and A Chair: A New York Love Affair, the special Encores! revue of Stephen Sondheim songs that runs only through tomorrow. The orchestra gets the final bow at both shows and, for a change, the standing ovations seem genuine instead of obligatory.
Much of the excitement for A Bed and A Chair is due to the fact that Wynton Marsalis, Jazz at Lincoln Center's celebrated artistic director, is not only a producer but playing solos from the lead trumpet chair.

The idea for this collaboration between Marsalis and Sondheim seems to have been to give the Sondheim songbook the kind of jazz props that Nelson Riddle gave the great songwriters of the ‘30s and ‘40s when he produced his songbook series for Ella Fitzgerald and Frank Sinatra and Dave Grusin did with the Gershwins in the ‘90s.
The difference is that Riddle and Grusin used jazz singers. A Bed and A Chair depends mainly on Broadway performers. And so the result is not all that much different from any other Sondheim tribute concert.

That’s OK when Bernadette Peters, looking fabulous in a skin-tight dress at 65, performs her numbers with a sassy verve and wit that transcend genre. But it’s less satisfying when Norm Lewis and Jeremy Jordan go through the usual paces as they perform theirs.

There’s a half-hearted attempt to frame the evening as a series of love stories that are directed by John Doyle and sung by the three Broadway stars and a young French chanteuse named Cyrille Aimée.  Occasionally, a quartet of dancers, apparently cast to resemble the singers, perform dances that were pretty instead of jazzy and reminded me of some of the also-ran routines on “So You Think You Can Dance.”
After Midnight delivered considerably more satisfaction, even though it, too, is an odd duck of a show.  It bills itself as an homage to fabled Harlem hotspots of the ‘20s and ‘30s like the Cotton Club and the Savoy Ballroom and there's no plot here either.
Of course this has been done before in revues like Sophisticated Ladies and Black and Blue and, as my husband K noted, the musicians in those orchestras included renowned sidemen who actually played alongside Duke Ellington, Count Basie, Cab Calloway and other major band leaders of the era. But the music remains irresistibly entertaining and a whole new crop of performers have sprung up to put their spin on it.

Under the direction of Warren Carlyle, a cast of more than two-dozen hardworking singers and dancers perform a series of numbers composed by the likes of Harold Arlen, Dorothy Fields & Jimmy McHugh, Yip Harburg and primarily Ellington.

After Midnight’s featured performers include Dulé Hill, now best known for his roles on TV shows like “Psych” and “The West Wing” but who got his start as the understudy to Savion Glover in The Tap Dance Kid, and the "American Idol" winner Fantasia Barrino, who earned her Broadway stripes  when she replaced LaChanze in The Color Purple.
Fantasia has slimmed down since then and she looks terrific in the gowns created by Isabel Toledo, who designed the outfit Michelle Obama wore to the first inaugural. And Fantasia sings the hell out of numbers like “I Can’t Give You Anything but Love” and “Stormy Weather,” which she imbues with a soulfulness that simultaneously honors and updates those classics.
But you'll have to hurry if you want to see her cause she’s only scheduled to stay with the show until Feb. 7.  Then k.d. lang has signed on to step into the role, followed later by Toni Braxton and Baby Face Edmonds and who knows who else if the show has a long enough run.
The dancers are less well known but just as delightful. The rubber-limbed Julius “iGlide” Chisolm, combines jazz-era cool with hip-hop flair and it works wonderfully. The sweet-faced, high-energy tapper Dormeshia Sumbry-Edwards brings to mind Debbie Reynolds in “Singin’ in the Rain.” And even the ensemble dancers are first rate, among them is the former Alvin Ailey star Desmond Richardson.
Needless to say, the band swings throughout the proceedings. In an acknowledgement of their key role, each member of the orchestra has been given an individual entry in the Playbill just like stars usually get.

Labels: A Bed, A chair: A New York Love Affair, After Midnight