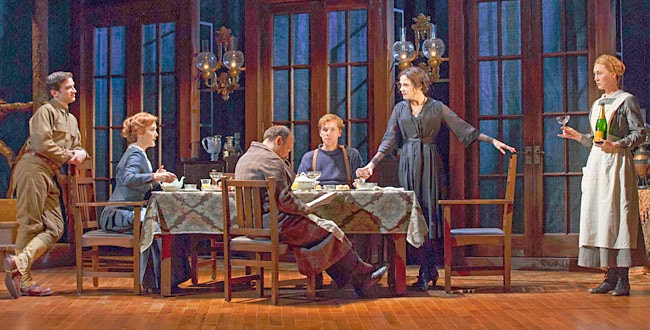 Are theater producers becoming like their counterparts in the movie business and saving their best stuff for the time closest to awards season?  I ask because this is the second fall in a row in which the shows—at least the new ones—have been really disappointing.

Sure, there’s a lot of excitement over this season’s prestige productions—Cherry Jones and Zachary Quinto in The Glass Menagerie, Daniel Craig and Rachel Weisz in Betrayal, Mark Rylance doing both Twelfth Night and Richard III and the “X-Men” (and RSC vets) Ian McKellen and Patrick Stewart in rep with Waiting for Godot and No Man’s Land—but those are all revivals.

Eight original productions have opened since the romcom First Date arrived in August and they haven’t fared nearly as well. Two (Soul Doctor and A Time to Kill) have already closed and two others (First Date and Big Fish) have posted notices and will shut down at the end of the holidays.
Meanwhile, limping along with the crutch of subscription audiences are the Roundabout Theatre Company’s revival of The Winslow Boy, which will end its scheduled run on Dec. 1, and MCC and the Manhattan Theatre Club’s joint production of The Snow Geese, which will fly off as originally announced on Dec. 15.

They’re both nicely designed productions (I'd happily move into either of the homes created onstage) and cast with accomplished actors (a special shout-out to Michael Cumpsty in The Winslow Boy and Victoria Clark in The Snow Geese) but both shows are as bland as pabulum.
My husband K is a big Terence Rattigan fan and so we had high hopes for the revival of The Winslow Boy, Rattigan’s 1946 play about a father’s ruinous quest to preserve his family’s honor by clearing the name of his teen son who has been expelled from a prestigious military academy after being accused of stealing. 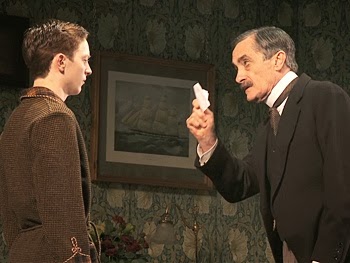 Three movies have been made from this Edwardian-era morality tale, which Rattigan based on a real-life case. And the story not only has “Downton Abbey” appeal but juicy roles for all eight members of the cast, most particularly the father and the boy’s older sister.  Alas, it is there where this production falls down.
I’m a big fan of the masterly actor Roger Rees (who’s been great in projects ranging from his Tony-winning turn as the title character in The Life and Adventures of Nicholas Nickleby to his appearances as Sam Malone’s millionaire rival on TV’s “Cheers") but he’s miscast here (click here to read an interview with him).
The father’s transformation from a bastion of overbearing rectitude to a man broken by his own bullheadedness is supposed to provide the play’s emotional arc but Rees, under the shaky direction of Lindsay Posner (click here to read her take on the production) is never able to summon up the requisite arrogance and the tragedy is softened without it.
Similarly, the sister Catherine starts off as a dilettante who dabbles in suffragist causes but ends the show as a woman whose political mettle has been finely honed. But Charlotte Parry starts off iron-willed and has nowhere to grow. The Winslow Boy shaped by these performances isn’t bad but it fails to stir the heart.
The Snow Geese doesn’t generate much passion either. Although set in the same era around World War I, it's a brand new play by Sharr White, who won acclaim for last season’s production of The Other Place, although not from me (click here to read my review).
The story purports to be about a fortysomething widow whose idyllic life is shattered by the death of her husband and the unexpected debts he’s left behind. But the play is also yet another homage to Chekhov (seagull, snow geese, get it?) complete with a country home setting, world-weary relatives and a resident doctor, played here with customary finesse by Danny Burstein.
The widow is played by Mary-Louise Parker, who looks lovely in the gowns Jane Greenwood has designed for her but neither Parker nor director Daniel Sullivan seem to have worked out what else the role demands (click here to read an interview with the star).
Further complicating matters is the fact that Parker, although an age appropriate 49, looks too young to be the mother of grown sons. This adds to the play’s general confusion because Evan Jonigkeit and newcomer Brian Cross (click here to read a piece about him) often look as though they might be her lovers instead of her sons.
On the other hand, there are flashbacks to scenes with the husband that are equally confusing because they add so little to the storytelling.  In fact, I’ve no idea what White is trying to say at all. The Snow Goose is the kind of play that were it a movie would probably be released in the the stay-at-home months of winter.