And Now a Giveaway for the Scottish Play 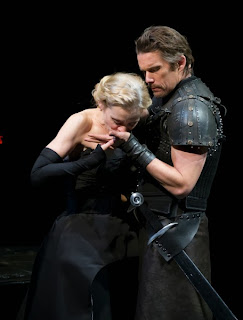 Theater lovers who love Shakespeare must be thrilled with this season, which has turned out to be the theatrical equivalent of a greatest hits album featuring nearly all the Bard’s most beloved plays.

So far I’ve done a Twelfth Night and a Richard III (which I actually see tonight) in repertory on Broadway, A Midsummer Night’s Dream and a Julius Caesar off-Broadway, two Romeo & Juliets, one on and one off Broadway, and the NT Live simulcast of Othello.
Next up for me is Lincoln Center Theatre’s production of Macbeth, starring Ethan Hawke and the multi-Olivier Award-nominated actress Anne-Marie Duff as the murderously ambitious thane and his wife. Plus there's a badass all-male trio of witches played by three of New York’s most badass character actors: Malcolm Gets, Byron Jennings and John Glover (click here to read a preview piece about them).

And seeing what theater people call "The Scottish Play" could be next for you too because the folks at Lincoln Center have given me two free tickets to give away.

But we’ll have to move fast because the tickets are only good for performances until Dec. 14 and the reservations must be made by Dec. 4.

So, email me the name of the last actor to play Macbeth on Broadway at jan@broadwayandme.com (sorry about the technical glitch; the address is jan@broadwayandme.com) by midnight this Friday, Nov. 22, and I’ll go through my usual ritual of picking a name out of a hat and then will announce the winner on Saturday.