Who's Won the Chance to Hail Macbeth? 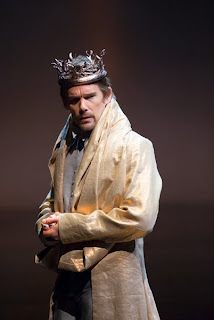 It’s a little surprising to me but you guys seem to prefer free cast recordings and tell-all books to free theater seats. Still, a couple of you did write in for the giveaway of two free tickets to see Lincoln Center Theater’s new production of Macbeth, directed by the ever-inventive Jack O’Brien and starring the always-passionate Ethan Hawke.

Kudos to him and to the rest of you who participated in this giveaway go-around. And here are a couple of consolation prizes for everyone:

The first is a brief sneak peek at the meet-and-greet between the press and the cast (which in addition to Hawke, includes Richard Easton as the doomed King Duncan; Brian D’Arcy James and Daniel Sunjata as Macbeth’s comrades-in-arms-turned-rivals Banquo and Macduff; Malcolm Gets, John Glover and Byron Jennings as the witches; young Jonny Orsini as the eventual victor Malcolm and Anne-Marie Duff as Lady Macbeth). You can view it by clicking here.

The second is a 30-minute interview with Hawke about his career and how he got into acting, which you can see here.

And if all of this makes you eager to see the production, which just opened on Thursday and is scheduled to run through Jan. 12, you can get a discount off the ticket price if you use the code:  MACBLOG89.