A Eulogy for "A Time to Kill" 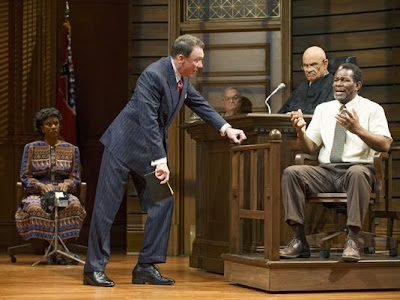 I come to bury A Time to Kill, not to praise it. Cause it’s too late for the latter. The courtroom melodrama that opened just last month at the Golden Theatre announced this week that it will close on Nov. 17.

And even it were playing longer, I wouldn’t have said it’s a great show. But I do think it might have been an entertaining one for its target audience: tourists and others looking for an easier evening of theater than the Shakespeare, Pinter and Beckett plays that are the dominant fare of this fall season and fans of the legal thriller writer John Grisham, on whose novel the play is based.
But there’s little room for that kind of mid-brow entertainment on Broadway any more. Ticket prices are so high that people want to feel as though they’re getting a surefire bang for their buck. So today a Broadway show has to have a big star (and although this one has a 14-member cast packed with some very fine stage vets, it lacks a big Hollywood name).
Or it has to be a jukebox musical, filled with familiar songs that people walk into the theater humming (ATK is a straight play although there is a lot of hokey incidental music). Or it needs to be a critical darling (which this show with its down-market Grisham pedigree almost never would have been; and indeed it’s scored a C+ on StageGrade).
Grisham has, of course, done much better on the bestsellers list. His 1989 novel “The Firm,” which was turned into a hit 1993 movie with Tom Cruise, made the author a big name in the book business but “A Time to Kill,” a kind of homage to Harper Lee’s classic “To Kill a Mockingbird,” was his first novel and is probably his best, although I haven’t yet read “Sycamore Row,” the “A Time to Kill” sequel that came out just two days after the show opened (click here to listen to an interview with the author).
Both versions are set in the 1980s in Grisham’s home state of Mississippi and their main character is an amiable young white lawyer named Jake Brigance, whom Grisham, an Ole Miss law school grad who tried cases until the book money started coming in, based on himself. The story follows Jake’s attempt to defend a black man who shoots and kills two white low-lifes after they brutally rape his 10-year-old daughter.
The producers recruited Rupert Holmes, the Tony-winning author of The Mystery of Edwin Drood, to do the stage adaptation and he’s done a fair job but there’s no getting around the fact that right from the start, the outcome is clear—even clearer than in the book— so there’s no suspense.
Also, in the interest of keeping the audience on Jake’s side, Holmes and director Ethan McSweeny have glossed over the morale complexities of rooting for a man who has literally taken the law into his own hands and the fact that most of the dramatic events take place offstage.

They try to make things interesting by leaning heavily on the clever revolving set devised by James Noone, which offers different perspectives on the courtroom in which most of the action takes place, and occasionally puts the audience in the spot that would be held by the jury (click here to read a piece about the set).
And they lean on their cast of first-rate stage vets.  Sebastian Arcelus, last seen on Broadway in the title role in Elf, proves he’s got range as the upright Jake—and a willingness to do whatever it takes to win over the audience, including wearing his hair in the shoulder-brushing style Matthew McConaughey wore in the movie version.
Ashley Williams isn’t quite as perky in the role of the law student who assists Jake as Sandra Bullock was in the movie, although who could be? But John Douglas Thompson, celebrated for his portrayals of majestic suffering in off-Broadway productions of Othello and The Emperor Jones, plays the avenging father with similar intensity.

In other supporting roles, Tom Skerritt brings his twinkly-eyed charm to the role of Jake’s drunk mentor and Patrick Page, who never disappoints be it as the original Green Goblin in Spider-Man: Turn off The Dark or Henry VIII in the Roundabout’s revival of A Man for All Seasons, is appropriately and deliciously hammy as the unctuous prosecuting attorney (click here to read an interview with some of the cast members).

The only weak link is Fred Dalton Thompson, the actor-politician who did five seasons as the head prosecutor on “Law & Order,” served for eight years as the U.S. Senator from Tennessee and made a half-hearted run for the presidency in 2008 (click here to read an interview with him). At the performance my friend Priscilla and I attended, Thompson, who plays the trial’s judge, kept tripping over his lines.

But no matter. The verdict is now in for A Time to Kill and the sentence is death, without appeal.

Labels: A Time to Kill

to tell the truth, i bought this book for my mom and i havent read it. but she has, and she enjoyed it a lot found it very gripping and exciting. She is always on the look out for new stuff from John grisham, but she does nit like the Theodore Boone books. Other than those, she owns every single grisham there is.