Yeah, Another Giveaway…But A Really Big One 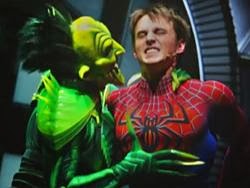 First things first:  it looks like I owe you guys an apology. Because either you all really don’t want to see Disaster! (which I don’t believe) or I made the giveaway question too cumbersome (which is probably the case.) Whatever the reason, no one wrote in for the last giveaway so I’ve got no winner to announce.


But I’m betting that it will be different with this week’s giveaway because up for grabs is a copy of the eagerly anticipated new book “Song of Spider-Man: The Inside Story of the Most Controversial Musical in Broadway History” by Glen Berger.

As most theater lovers know, Berger was Julie Taymor’s co-writer on Spider-Man: Turn off The Dark, which, as his book title suggests, may be the most notorious musical of all time. Luckily, he kept notes during the show’s long and troubled gestation and now his 384-page tell-all is touted to reveal all the behind-the-scenes dirt about the battles between Taymor and her erstwhile collaborators the big rock musicians—but total musicals novices—Bono and the Edge.

The book is due out Nov. 5 but the New York Post columnist Michael Riedel has already had a sneak peek and you can see some of the advanced dish he been sharing by clicking here.

Even better, you can get a chance to have your own free copy of the book (plus a bonus prize of the tickets to Disaster!) by emailing me the name of the actor who was originally supposed to play the show’s villainous Green Goblin at jan@broadwayandme.com by midnight this Sunday, Nov. 3.

And speaking of green, let me join the chorus of congratulations to Wicked, the Wizard of Oz prequel that tells the story of the defiantly green witch Elphaba, cause it celebrates its 10th year on Broadway today.