One Giveaway Winner...and Another Contest 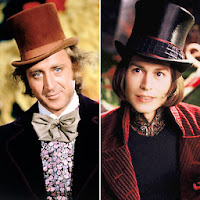 You B&Me readers are a clever bunch: everyone who wrote in for the chance to win a free digital download of the cast recording for the new musical Charlie and the Chocolate Factory got the right answer (Gene Wilder and Johnny Depp) to my challenge to name “the two famous actors who played Willy Wonka” in the movie version of Roald Dahl’s classic book.

So once again, I printed the names out, put them all in a bag and got my always-supportive husband K to reach in and picked one out. The winner is Myra Wong.  Congratulations to her and thanks to all of you who participated.
It was fun and since the offers for more giveaways are tumbling in, here’s another chance to win something. This time up, it’s tickets to the new musical Disaster! by Seth Rudetsky and Jack Plotnik.
Set on a floating nightclub in the summer of 1979, Disaster! is a jukebox musical that mashes up a playlist of Top 40 hits from the ‘70s with a spoof of disaster movies like “Airport,” “The Poseidon Adventure” and “The Towering Inferno,” whose thin plots revolve around a motley crew of characters fighting to survive some natural or man-made calamity. 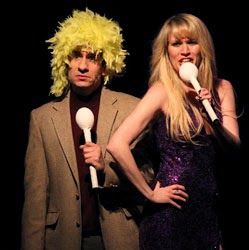 Anyone who knows anything about theater today knows that Rudetsky, who is an actor (The Ritz) musician (numerous other Broadway shows), novelist (“Broadway Nights”) producer (the Actors Fund concerts), radio host (Sirius Satellite Radio) Playbill contributor, deconstructor of Broadway show tunes (click here to check them out)  and all-around theater gadfly, loves to make people laugh. Which, judging from the word of mouth, is exactly what he did when Disaster!  ran last year at The Triad theater up on 72nd Street.
Now, the show is moving into St. Luke’s Theatre on West 46th Street with a cast that includes the great Mary Testa. You can find out more about it by clicking here. And you can win two tickets to see it by sending the correct answer to the following challenge:

Airplane’s Lloyd Bridges and Peter Graves, Poseidon Adventure’s Gene Hackman and Ernest Borgnine and Towering Inferno’s Steve McQueen and Paul Newman all appeared on Broadway at one time or another. Name the one who did it first and the one who appeared there most recently.

Email the answers to me, with the word “Disaster” in the subject box, at  jan@ broadwayandme.com by midnight this Sunday, Oct. 27.