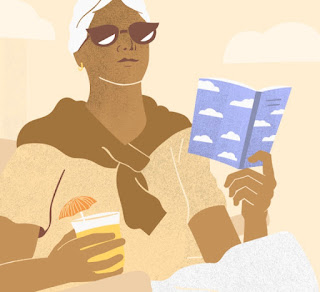 Now that Covid has been around for more than two years and vaccines have made contracting the virus a little less scary, a new kind of normal is settling in. The Tony award ceremonies returned to Radio City Music Hall. Tourists are trickling back into Times Square. And Broadway has dropped its mask-wearing mandate, at least for now.

But some things haven’t changed: as I did in the summers both before the shut down and during it, I’ve nested myself on our terrace as soon as the weather would permit with a drink in one hand (my husband K has been whipping up caipirinhas this year) and an iPad in the other so that I can switch between reading books on my Kindle app and listening to them on my Audible app.

As usual, most of the books have had something to do with theater. Most this year are fiction, a reflection of the fact that people are writing some really good novels and short stories about the world of the theater but also a reflection of the fact that I love those kinds of stories. So in keeping with what has become one of my favorite summer rites, I’ve put together a list of 10 books for those of you who, like me, enjoy theater-related reading during the lazy hours of this sweet season. In the meantime, Happy Fourth of July.

All About Me!: My Remarkable Life in Show Business by Mel Brooks.  You have to wait all the way until Chapter 25 for Brooks to start talking about teaming up with Susan Stroman, Nathan Lane and Matthew Broderick to create their Broadway phenom, The Producers. But he’s such a great raconteur that even the accounts of his time in the army are entertaining. And there are even more enjoyable stories about his working on the all-star writing staff (Neil Simon, Carl Reiner, Joseph Stein, Michael Stewart) that created Sid Caesar’s “Your Shows of Shows;” his writing and directing of such comedic film classics as "The Producers," "Blazing Saddles" and "Young Frankenstein" and his zany courtship of and very happy 40-year marriage with the actress Anne Bancroft. Plus, if you listen to the audiobook, you can hear Brooks break into song whenever the mood seemed to strike him.

Booth by Karen Joy Fowler. This novel about the celebrated 19th century acting clan was written by a finalist for the prestigious Booker Prize and so can be added to your calorie count for literary fiction. Beginning in 1822 and ending with the aftermath of John Wilkes Booth’s assassination of Lincoln (an avid theater lover) it is both a family saga and a historical chronicle of the events leading up to and through the Civil War. But the best parts are the vivid details—the constant and uncomfortable travel, the fierce rivalries that animated audiences, the declamatory style that exhausted its practitioners—that defined the theater world of the Antebellum era.

Fallout by Sadie Jones. In all honesty, the characters are annoying in this novel about the personal and professional entanglements of four twentysomethings trying to start their theatrical careers. But the glimpses the story provides into the London theater scene of the 1970s is catnip for any theater lover. I don’t know enough about the players in that theater scene but I suspect others who do know it will have extra fun figuring out the real-life inspirations for the folks in the book. Email me if you have any informed guesses on who the villain—the slightly older and sexually ambivalent producer—might be.

From Gods to Bad Boys: A History of Theatre in Twelve Lives by Giles Ramsay. The god is Dionysus and the baddest of the boys is the playwright Joe Orton in this chatty history of theater told through profiles of the men (and a couple of women) who made it. Some of Ramsay’s choices can be eccentric (a whole section is devoted to the now forgotten British actor Victor Henry) and no Americans made the list but the book still makes its case that from the very beginning theater makers have always striven to make the work they put on the stage truly reflect the lives and concerns of the people watching it.

Good Company by Cynthia D'Aprix Sweeney. If you’re a fan of the Noah Baumbach movie “Marriage Story,” that starred Adam Driver and Scarlett Johansson, there’s a strong chance that you’ll love this engaging novel about a couple who, after scrimping and maneuvering to maintain a small New York theater company for 20 years, move to Los Angeles, where they make discoveries about themselves, their definitions of success and their marriage.

In the Long Run: A Cultural History of Broadway’s Hit Plays by Jordan Schildcrout. Most theater lovers can list the longest-running musicals right off the top of their heads. But it’s tricker when it comes to naming the longest-running plays because there haven’t been many of them in recent years. Which is why Schildcrout’s chronicle of shows that clocked 1,000 performances or more (Lightnin', a comedy that opened in 1918 and ran for three years, was the first; Neil Simon's Brighton Beach Memoirs, which closed in 1986 after its three-year run, was the last) is such a treat.  As Schildcrout notes in his introduction, critics didn’t always love these shows but audiences did and together they provide an invaluable portrait of a time when Broadway truly was mass entertainment. You can hear an interview with Schildcrout that BroadwayRadio's James Marino and I did (as well as more about some of the other books on this list) by clicking here.

I Was Better Last Night by Harvey Fierstein. How could this not be great?  Fierstein has been involved with so many seminal productions (Torch Song Trilogy, La Cage aux Folles, Hairspray, Kinky Boots). He’s known so many celebrated people in so many different fields (Anaïs Nin, Andy Warhol, Ellen Stewart, Bella Abzug, Cyndi Lauper). And it goes without saying that he is inherently funny. So this wildly-entertaining memoir, which covers his years as a cast-album-loving Brooklyn boy in the 1950s, as a club kid prowling for sex in the ‘60s, as an emerging talent in the downtown theater scene of the 1970s, as an activist during the AIDS crisis of the 1980s and as an eventual Broadway icon, is a real page turner. And listening to Fierstein read the book in his distinctively raspy growl is like curling up for a gossipy gab with an old friend.

The Show Girl by Nicola Harrison.  Set during the final years of the Roaring Twenties, this novel focuses on the personal and professional ups-and-downs of an ambitious young woman who becomes a showgirl in the Ziegfeld Follies. It’s basically a romance novel complete with a rich and hunky love interest but it’s also a fun behind-the-curtains look at what life might have been like for Sally, Phyllis and the other “girls upstairs” in Follies.

The Sisters Sweet by Elizabeth Weiss. The old sensation-loving vaudeville circuit provides the backdrop for this novel about twin sisters who climb up the billboard when their father, who once had stage dreams of his own, comes up with the idea of them pretending to be cojoined, or Siamese, twins. The deception works until the ambitions of one destroys the act and leads them down separate paths. The story is so redolent of that itinerant showbiz era that I kept expecting Mama Rose to make a cameo.

Vamp Until Ready by James Magruder. It would be hard to find a lovelier collection of theater-related short stories than this one. These five are linked by a group of people—gay and straight, theater professionals and amateurs—who are connected to a summer stock theater company in Ithaca, New York during the Reagan-Bush era and by the ways in which theater can change and expand lives. Supporting characters in one story become the leads in others, a sometimes humorous, sometimes poignant reminder that we’re all the stars in the tales we tell ourselves.