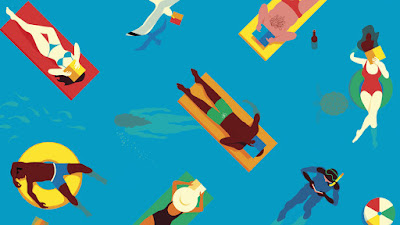 Memorial Day came and went a month ago. The Summer Solstice breezed in last week. The Fourth of July is just a few days away. And temperatures here in New York are heading into the high 90s. So no matter what yardstick you use, summer is here. And that means it's time for my annual summer reading list of books theater lovers can savor while at the beach, lazing in the park or, in my case, chilling on the terrace. To be honest, I'm more ambivalent about some of the books below than I have been about those in previous years but each still has its own charms and as my mother used to say, different strokes for different folks so I'm hoping you find at least a few that suit you.

100 Greatest American Plays by Thomas S. Hischak  As the continuing debate over The New York Times list of the most significant plays of the last 25 years shows, people love lists. And we theater lovers are particularly crazy about them. This one by a theater historian who teaches at the State University of New York spans three centuries, starting with The Contrast, a social satire written in 1787 by a former Revolutionary War officer named Royall Tyler, and ending with Clybourne Park, Bruce Norris' 2010 Pulitzer Prize-winning sequel to A Raisin in the Sun. The entries are arranged, like this list, alphabetically but each one includes a synopsis, a few lines of dialogue from the play, an analysis of its significance, cast lists from major productions, the author's bio and contemporaneous reviews. Reading one or two at a time is a perfect way to idle away a summer day.

Drama: An Actor's Education by John Lithgow This memoir of Lithgow's coming of age as an actor is the basis for Stories by Heart, the one-man show he's toured around the country, including a stop at the Roundabout Theatre Company earlier this year. But the book is better. While the show focused on Lithgow's recitation of short stories by Ring Lardner and P.G. Wodehouse that his father Arthur Lithgow read to him as a child, the book is a delightful look back at how Lithgow mastered his craft from his days as a teenage spear-carrier in summer Shakespeare festivals to his later successes on both the big and little screen and, of course, onstage. But it is most of all a loving tribute to Arthur, who created those summer festivals but who never achieved the theatrical stature his son has attained.

I'm Glad About You by Theresa Rebeck  There isn't as much theater as I hoped there would be in this romcom about Alison, a New York-based actress from Ohio trying to get back with her high-school sweetheart. But the book is by the frequently produced playwright Theresa Rebeck and she knows the theater world. The demands put on young actresses in the book ring true, as do the audition scenes in which scores of contenders struggle to stand out from the crowd. As fans will know, Rebeck created the behind-the-scenes TV show "Smash" and was then fired from it and she's even tougher on the TV industry.

Macbeth by Jo Nesbø  Filling the slot for this year's entry in the Hogarth Press series of reimaginings of Shakespeare's plays by major contemporary writers is a brooding version of the Bard's tragedy about unbridled ambition. In this update, set in a drug-plagued Scottish town during the 1970s, Macbeth starts his climb when he's the valorous head of the local police department's SWAT team, his wife owns the local casino and the three sisters are drug dealers. All the familiar double crosses are there and most of the famous lines are interpolated into the text but while Macbeth is one of Shakespeare's shortest plays, this version comes in at over 500 pages and some of the additional plot twists struck me as silly. Still, the book is written by the Norwegian crime novelist who has huge followings among both literary readers and thriller lovers and if you count yourself among either of those groups it might be just the thing for you.

Payment in Blood by Elizabeth George   What could be more enjoyable than a British country house mystery on a summer afternoon? This one, originally published in 1989, deals with the murder of a playwright who has gone to a remote town in Scotland with a group of top London actors to rehearse a play backed by a leading West End producer. George's intrepid detective is Inspector Thomas Lynley, who also just happens to be an earl. His loyal No. 2 is Barbara Havers, a female sergeant from a working-class background, which makes for all kinds of gender and class conflicts. A modern master of the genre, the American-born George is a first-class writer and she's deft with all the tricks of her trade. The result, if you know how these books work, is totally predictable but it's also totally delectable.

Playing to the Gods by Peter Rader  Nearly everyone knows the name Sarah Bernhardt (Janet McTeer is set to portray the legendary actress in a new bio-play this fall) and every self-respecting theater aficionado knows who Eleonora Duse is as well. Multiple books have been written about both of these 19th century divas who defined acting in their time and helped create the kind of fanship that still echoes in ours.  But this is their first dual biography and in alternating chapters the book tracks the lives of the French Bernhardt and the Italian Duse, providing a fascinating account of their rivalry, their struggles to balance their personal and professional lives, and theater's transformation from an art form that emphasized the presentational into one that championed the truly emotional. I'm cheating a bit with this book because it won't be available until August but you can already pre-order it on Amazon.

Take You Wherever You Go by Kenny Leon  This autobiography tracks the life of the African-American director whose Broadway revivals of Fences and A Raisin in the Sun won multiple Tonys. Leon's other accomplishments include serving as artistic director of Atlanta's Alliance Theatre Company for 12 years, which made him one of the few black people ever to lead a major regional theater, and directing the TV musicals "Hairspray Live!" and "The Wiz Live!." Along the way, he's worked with an eclectic roster of talent ranging from Sean Puffy Combs to Kristin Chenoweth, Denzel Washington to Arianda Grande. But the memoir, which takes its title from advice Leon's beloved maternal grandmother gave him, is more of an inspirational Ted Talk than a deep look at his life. Leon has loads of good things to say about the people he likes, keeps mum about those he doesn't and is thoroughly self-effacing all the way through. It's easy to see why people like having him around.

Unmasked: A Memoir by Andrew LloydWebber  The New York Times trashed Lloyd Webber's look back at his early years, from his grammar school days to the opening of The Phantom of the Opera. But I was charmed by it. I don't know if Lloyd Webber had help writing the book but its cheeky voice suggests he did it by himself and he turns out to be a totally entertaining writer: witty, gossipy and not above calling out folks who have gotten on his nerves. His accounts of the makings of his signature shows are engaging and instructive. He's especially good at explaining the technical aspects of composing a score and he does it without being boring. If you love musicals, and particularly if you love his, this book is an ideal companion on a lazy afternoon.

Year of the Mad King by Antony Sher  An artistic polymath who is as excellent a writer as he is an actor, Sher (he's also a fine painter) has published a series of books about how he crafts his performances of some of Shakespeare's greatest characters. I loved his earlier "Year of the King" about how he put together his portrayal of Richard III and so I dived into this new one about his Lear as soon as it came out. But, alas, Sher's work on the play got interrupted by the illnesses and deaths of his sister and sister-in-law and so the book spends more time grappling with his familial affairs than it does delving into Lear's. It's understandable but lamentable, particularly because the sections in which he explains his wrestling with Lear are so good.

And finally, there's The World Only Spins Forward by Isaac Butler and Dan Kois.  I can't say enough about this oral history of Angels in America.  In fact, you can read a full review of it I wrote for the National Book Review by clicking here.