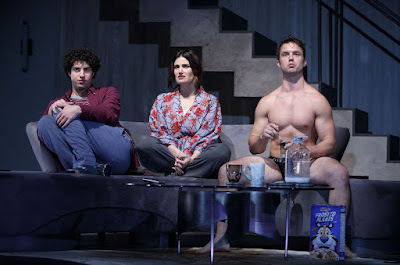 "I really identified with El," I overhead a seventysomething-year-old man telling his similarly-aged wife as we all walked out of Skintight, the new comedy by Joshua Harmon about older men wanting younger lovers that is playing at the Roundabout Theatre Company's Laura Pels Theatre. The wife took it better than I would have. "I can understand that," she said patting his arm empathetically. I understand it too but I can't say I like the sentiment or the play that motivated it.

The play opens on the eve of  the Jewish Elliot's 70th birthday when his grown daughter Jodi, the child of his closeted-era marriage with a woman, arrives unexpectedly at his chic Greenwich Village townhouse. She says she's come to celebrate her dad's milestone but it's quickly obvious that she's there to seek solace about the fact that her ex-husband has gotten engaged to a Spin Cycle instructor half his age.

As you might guess, Jodi becomes even more unhappy when she discovers that Trey has moved in with Elliott. Also on hand are Jodi's nebbishy gay son Benjamin, who has an eye for Trey; and two servants, an older Hungarian housemaid and a younger butler, who once had a thing of his own with Elliot.

Harmon has drawn praise (including some from me) for his previous plays Bad Jews, Significant Other and Admissions, which played at Lincoln Center earlier this year. But the main draw for this production is the presence of Idina Menzel, who, in a rare non-singing role, has a great time playing Jodi (click here to read an interview with her).

Menzel's face on the poster and the Playbill has drawn criticism from folks who expected her character to have a larger role and narrative arc. But that bothered me less than the play's declared message, delivered in a long monologue by Elliot, that youth and beauty matter more than love or fealty when it comes to choosing a mate. "Hot is everything," Elliot tells Jodi.

The hell it is. I heat up at the sight of taut abs and tight butts as much as everyone else but they seem a damn shallow foundation on which to build a meaningful relationship, regardless of your gender identity or sexual orientation. There may be a defense for Elliot's philosophy but Skintight, filled with one-dimensional characters and specious arguments, makes a damn shallow case for it.

Fans of the play (and I can’t help noticing that most of the good reviews have come from men) will say that Harmon is just exploring society’s obsession with youth and beauty. But if that's the case why isn't some attempt made at a brief for those of us who think there are other reasons to love people too.

Still, Harmon has a way with snappy lines and he and his frequent collaborator director Daniel Aukin treat Skintight as something of a sex farce without doors, although a long staircase and a sleek couch are used to good comic effect. So is the character of Trey, played by newcomer Will Brittain, whose physical attributes are put on abundant display (click here to read an interview with him).

Maybe it’s best, particularly for those of us over 40 (Harmon is 35) to think of Skintight as just mindless summer entertainment. Although if I were Harmon’s significant other, I’d be keeping a wary eye on the calendar.