Mixed Blessings in "Our Lady of 121st Street" 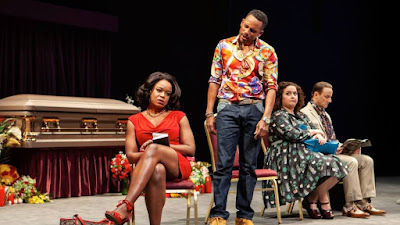 Although separated by five centuries and different codes of acceptable onstage profanity, the playwrights William Shakespeare and Stephen Adly Guirgis have a lot in common. Wait; hear me out.

Both writers share a love of language and a knack for a piquant turn of phrase.  Each wrote with the politics of his time decidedly in mind. And both wrote for a company of actors who were friends as well as colleagues and whose professional talents and personal tics helped shape the characters each playwright crafted for them.

All of that is on flamboyant display in the entertaining, if not entirely satisfying, revival of Guirgis' Our Lady of 121st Street, which is running in Signature Theatre Company's Irene Diamond space through June 17.

The play is ostensibly about a group of people gathering for the wake of a nun who was a significant figure in their lives when they were young. But Guirguis seems to have been most motivated by the fact that it was originally to be performed by the LAByrinth Theater Company, a group founded in 1992 to provide challenging work for an ethnically diverse troupe of theater artists who wanted to do plays about contemporary life.

Over the years, members of LAByrinth have include Bobby Cannavale, Stephen McKinley Henderson, Deirdre O'Connell, Daphne Rubin-Vega, Michael Shannon and Philip Seymour Hoffman, who for a time served as artistic director and major funder. Guirguis, who eventually emerged as the playwriting voice for the group, created roles that would speak to the talents of its company members and showy speeches that actors everywhere should prize.

I first saw Our Lady of 121st Street when it ran at the Union Square Theater back in 2003 and, in all honesty, I didn't know what the hell was going on. The play opens inside a Harlem funeral home where a barelegged guy is loudly and profanely complaining that someone has stolen his pants—and the nun's body out of her casket. Then, things gets even more bizarre.

The gathering would-be mourners—who include but are not limited to a cop investigating the thefts, a disaffected priest taking confessions, a radio deejay and his still angry ex-wife, a closeted gay attorney and his needy lover and a local building super who cares for his mentally handicapped brother—seemed at moments too unconnected to one another and at others too quick to hook up with one another.

But, having seen and enjoyed other Guirguis works like The Motherfucker with A Hat and the Pulitzer Prize-winning Between Riverside and Crazy, I went in with different expectations this time. And although Our Lady's structural problems remain, I left with a smile on my face.

That's due in large part to the bravura performances of the show's 12-member cast, all of whom bite into Guirgis' rich dialog with the gusto of carbo-deprived dieters coming off the Whole30 program. And director Phylica Rashad smartly gets out of their way and lets her actors have at it.

Two of the juiciest roles are the deejay Rooftop and his ex Inez, characters originally tailored to the prodigious talents of the always-soulful Ron Cephus Jones and the fierce, solo-named actress Portia. I'm not sure I would have thought of either Hill Harper or Quincy Tyler Bernstine to step into their shoes but I would have been wrong.

Harper, who has specialized in playing sensitive pretty boys in TV procedurals like "CSI:NY," is sensational as Rooftop, a fast-talking charmer who's proud of his success but ashamed of what it cost to get there. Harper is particularly adept with Guirguis' hilarious patter and the air crackles whenever he's onstage.

Bernstine has made a career out of playing humble yet strong women and so it was an extra treat to see her break loose as the boozy, sexy and politically incorrect Inez—and doing it without sacrificing an ounce of the character's underlying pathos.

Guirguis' plot doesn't really take them or their cohorts anywhere and the performances don't coalesce into a convincing whole but they do provide a cavalcade of affecting scenes studies in which lost souls struggle to find meaning in their lives.

If Shakespeare had written Our Lady of 121st Street, scholars would call it a problem play. But, as fans of the Bard know, even those shows have their pleasures and this one has at least a dozen of them.