"Between the Lines" Tells a Familiar Story 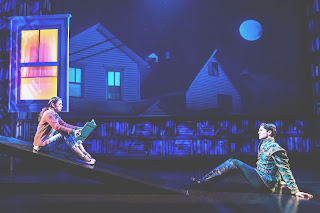 So many musicals nowadays are based on movies or other pop culture IP (by which I mean jukebox musicals of one kind or another) that it’s nicely retro to have one based on a book. That’s the case with Between the Lines, the new musical that opened this week at the Tony Kiser Theater. It's based on the eponymous YA novel that the bestselling author Jodi Picoult co-wrote in 2012 with her then-teenage daughter Samantha van Leer (click here to watch an interview about that with Picoult).

The original idea was van Leer’s. What, she asked her mom, might happen if characters acted one way when someone was reading the narrative in which they appeared but took on completely different personalities than the ones that had been written for them once the book was closed?

The answer they came up with was a clever story about a prince in a picture-book fairytale named Oliver. In his closed-book moments Oliver has grown tired of slaying dragons and saving princesses. In fact, he so desperately yearns to enter the real world that he magically makes contact with a sympathetic reader named Delilah.

She’s a teen who knows that she’s too old for picture books but has found refuge in the guaranteed happy endings in Oliver's fairytale after her parents' divorce has caused her and her mother to move to a new town where her mom cleans homes and her new schoolmates treat Delilah as an outcast.

It's not the kind of book I usually read but I confess that I was charmed by the story, particularly by the amusing alter-egos Picoult and van Leer created for the fairytale’s other characters who, in their closed-book time, have made peace with the narrative that Oliver is trying to escape: the evil villain Rapskullio is actually a sensitive artist and lepidopterist, or butterfly lover; the regal Queen Maureen is a homey earth mother who likes to bake cookies and the man-crazy mermaids are proud feminists.

I’d looked forward to seeing all of them and their cohorts onstage as Delilah and Oliver fell in love and attempted to find ways to break the barrier between their real and fairytale worlds. And I was further heartened by the fact that the score was by a rare all-female team, the newcomers Elyssa Samsel and Katie Anderson.

The presence of Daryl Roth as the show’s lead producer also promised a first-rate production. And under Jeff Calhoun’s sure-handed direction, the show delivers one with a talented cast led by the sweet-voiced Arielle Jacobs as Delilah and the pitch-perfect (in both voice and looks) Jake David Smith as Oliver.

And they get invaluable support from, among others, the veterans Vicki Lewis and Julia Murney and a particularly appealing Will Burton, whose comic and dancing skills are equally endearing. There are also spot-on costumes by Gregg Barnes, an amusing and surprisingly malleable set by Tobin Ost and terrific video projections by Catie Hevner.

So I’m not sure why I was so disappointed by this staged version of Between the Lines.  Maybe it’s because book writer Timothy Allen McDonald, who has a background in adapting children’s books and Broadway shows for the youth editions that school productions use, has put so much effort into checking all of the boxes that he and his colleagues think will appeal to the young demographic they’re so eager to woo.

Whatever the reason, the result turns out to be a patchwork quilt composed of what appear to be scraps from other shows. The conflict between Delilah and her mom has been amped up so that Murney can sing a Dear Evan Hansen-style power ballad about the difficulties of being a single mom.

Delilah’s only friend at school Jules is now nonbinary, nicely played by the nonbinary actor Wren Rivera but still echoing a similar character in Jagged Little Pill. And Delilah’s nemesis at school Allie McAndrews (played by the understudy Aubrey Matalon at the performance I attended) is a separated-at-birth twin of Regina George, the Queen Bee in Mean Girls.

What’s more, the entire ensemble is required to play roles in both Delilah’s real-world and Oliver’s fantasy one, a callback to the 1939 “Wizard of Oz" in which the actors playing the workers on Dorothy’s farm in Kansas also doubled as the Scarecrow, Tin Man and Cowardly Lion in Oz; that may have worked in that classic movie but it undercuts the narrative here. Meanwhile the backstories of the fantasy characters that won me over when I first read “Behind the Lines” get short shrift here.

Still, almost every performer is given a solo, some of them unnecessary (do we really need the school librarian's paean to Jane Austen's Mr. Darcy?) and they simply add to the show’s 2 hours and 15 min. running time.

Most of the melodies are catchy and many of the lyrics are smart (click here for a Spotify playlist of some of the songs) but the score doesn’t manage to distinguish itself from the legions of others that now mix show tunes, hip-hop and power ballads.

Of course despite my fondness for Picoult and van Leer's book, I’m not the target demographic their musical is aiming to please. And I imagine some tweens might really enjoy this show. Even so, I miss the enchantment I discovered in the pages of “Between the Lines” and it's made me a little grumpy that I didn't find a similar magic onstage in Between the Lines.

Labels: Between the Lines