This Post-Modern "Oresteia" is No Classic 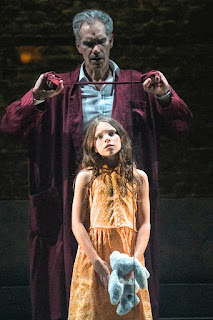 Greek tragedies don’t get done a lot. Which is why I really try to see them when I can. So my theatergoing buddy Bill and I bought tickets for the new production of the Oresteia that is playing at the Park Avenue Armory as soon as they went online. But what we ended up seeing was what Bill aptly labeled "an Oresteia”  For this version of the three-part tragedy that Aeschylus wrote in the 5th century B.C. has been rewritten and directed with self-congratulatory postmodern flair by the British wunderkind Robert Icke. It’s playing in rep with the Icke-directed Hamlet through Aug. 13 (click here to read more about that).

The original Oresteia, the only surviving trilogy from the Golden Age of classical Greek drama, chronicled the saga of the death of the warrior-king Agamemnon at the hands of his wife Klytemnestra, her murder by their children and the trial of their son Orestes. But in this production, first seen at London’s Almeida Theatre in 2015, Icke gets rid of the traditional chorus and instead re-enacts onstage its usual telling of the ritualistic child killing of the couple’s daughter Iphigenia, which is what first gets the cycle of revenge rolling.

The three-and-a-half hour production is performed in modern dress and with contemporary language in a blatant bid to make the plays more accessible to today’s audiences. I don't need actors to wear the togas and the masks that have traditionally been used for productions of Greek plays but I have to say that for me at least, Icke's updating robs the narrative of the mythic grandeur that has sustained it for nearly 2500 years.

Although a soothsayer begins the evening by reciting the names of dieties from a wide spectrum of religions, the gods are missing in Icke's version of the story. So it makes no sense—two millennium spoiler alert—that Agamemnon would sacrifice his daughter to win favor in the war that he is preparing to wage.

And while I don’t mind having Klytemnestra drop the f-word, I also wanted her and the others to speak some elevated language that would lift their monologues from the everyday dinner conversations that are repeated throughout the performance.

To be fair, there are moments that work. I sat up in my seat when Angus Wright’s Agamemnon and Anastasia Hille’s Klytemnestra went toe-to-toe in the argument over the fate of their daughter.

Both actors are tall and lean and radiate the tightly-coiled energy of panthers. Wright also has the dulcet voice and calibrated diction in which so many of the best British actors root their power and Hille unleashes the kind of raw passion that would do an old-style Method actor proud.  “This is my child – part of my body,” she yowls in anguish. Their clash is wrenching.

A coup de théâtre that marks the aftermath of Iphigenia’s death is equally impressive.  But all of that happens in the first act and the following three fail to keep the momentum going.

Icke frames the entire production as a series of therapy sessions in which Orestes recounts what happened, wrestles with being the sole survivor of his troubled family and prepares to go on trial for the murder of his mother. Bits of evidence are flashed onto to video screens above the stage but theatergoers who’ve forgotten the stories from their grade school readings of Edith Hamilton’s “Tales of Gods and Heroes” may be confused by what's going on.

Some double-casting and the post-death appearances of several characters only add to the murkiness. So here’s another spoiler, albeit I hope a helpful one: Wright plays the ghost of Agamemnon, his wife’s lover Aegisthus and a trial court judge in the final act.

In those final scenes, Icke tacks on some observations about feminism and politics but they might have worked better if they’d been braided into the entire narrative.

Throughout the performance, a digital display appears to mark the exact time of death of each victim. This clock is also used to countdown the time during each intermission. And when my mind wandered as it occasionally did, I used it to calculate how much time remained before the show would finally end.